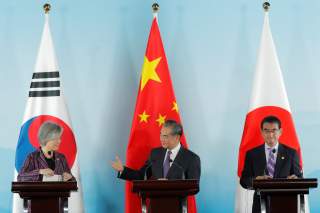 Ties between South Korea and Japan are in a free-fall.

With South Korea’s decision to scrap the 2016 military intelligence sharing agreement with Japan, the two sides have dramatically aggravated their fraught relationship. Bilateral ties had never been great, but in the past several weeks, a trade spat has snowballed into a confrontation that apparently has yet to reach rock bottom. Earlier this month, Tokyo removed South Korea from its list of favored trading partners, which includes the United States, Germany, France, and two dozen other countries, placing export curbs on industrial and high-tech products. This sparked a reciprocal move from Seoul, sending ripples of fear about the potentially destabilizing and detrimental effect of these moves.

The rhetoric from the leadership in the two capitals has exacerbated the degraded relationship, whipping up nationalist fervor among the populace, leaving little space for compromise. Of the 1965 treaty that established diplomatic relations, Japanese prime minister Shinzo Abe stated that South Korea has unilaterally “violated the treaty that served as the basis for us to normalize ties,” and South Korean president Moon Jae-in declared, “We will never again lose to Japan,” invoking Japan’s colonization of the Korean Peninsula from 1910–1945. Of the General Security of Military Information Agreement that Seoul recently decided to exit, the Blue House said that the pact did not comport with Seoul’s national interest, while protesters outside the Japanese Embassy cheered when the news was announced.

Moon’s comment underscores the lingering history of issues that have become increasingly toxic, seeping into the economic and security realms of the present. During World War II, Japan conscripted Korean women—possibly as many as two hundred thousand—to “serve” in military brothels. Questions regarding proper reparations to the victims of sexual exploitation, as well as for other conscripted Koreans laborers, have hampered bilateral relations ever since. Though many hoped a 2015 agreement between then-South Korean president Park Geun-hye and Prime Minister Abe would resolve the comfort women issue “finally and irreversibly,” President Moon later dissolved a joint fund that was set up with the Japanese government in 2018 to compensate the surviving comfort women. Shortly after, the South Korean Supreme Court ordered the seizure of certain Japanese companies’ assets to compensate victims of wartime forced labor, casting doubt on the legitimacy of the 1965 normalization treaty and reigniting the history disputes dramatically unfolding today.

As tensions between the United States’ two closest allies in East Asia threaten to boil over, former U.S. policymakers, such as Evan Medeiros and Victor Cha, have sounded the alarm on the negative effects on alliance relationships and policy coordination. They have provided prudent suggestions to stanch the bleeding, including quiet intervention by President Donald Trump and a suspension of the implementation of the retaliatory trade actions to allow for the two sides to cool off and investigate their respective complaints.

While negotiation and engagement at the leader level are critical, both sides also should be reminded about their convergence of interests and potential ways that the two countries could—and should—cooperate to confront their present and future challenges.

From Victimization to Women’s Empowerment

The wartime sex slavery issue is at the core of the historical disputes, with South Korea framing the “comfort women” as victims and the Japanese as aggressors who have not properly atoned for their wrongdoing. But there is an opportunity to turn a narrative of victimhood and grievance toward one of empowerment and support.

At home, both leaders have made efforts to show their support for women. A self-described feminist, Moon has pledged to bridge the pay gap and increase women’s representation in the cabinet. Abe has called for increasing female participation in the labor force to create “a society where women shine,” introduced the concept of “womenomics” to connect economic growth with women’s empowerment, and vowed to curb sexual violence against women.

Still, these moves are insufficiently addressing the problem: Japan and South Korea have the highest gender pay gap (24.5 percent and 34.6 percent) among countries in the Organisation for Economic Cooperation and Development. As far as political representation goes, women make up only 10 percent of the Japanese Diet, while women make up 17 percent of the South Korean National Assembly.

Given the leaders’ stated commitments to advancing the status of women, the two sides should support governmental, multilateral, and civil-society programs and initiatives designed to empower the women they claim they want to help and increase general awareness about wartime violence against women. Such actions would show that their concern for women is not merely political opportunism and sloganeering. To accomplish this, Jennifer Lind, a political scientist who specializes in East Asian affairs, has long suggested that constructing a shared and nonaccusative narrative, initiating multilateral inquiries into violence against women, and cooperating on textbook initiatives are promising approaches for reconciliation. Such programs should include international scholars, historians, activists, and women leaders to quarantine the issue from politicization and to pursue meaningful progress on reconciliation and real improvements for women in both countries.

Simply put, women aren’t having enough babies; a fertility rate of 2.1 is considered necessary to maintain stable population numbers. In Japan, the fertility rate is 1.45; in South Korea, it’s an even more dismal 1.05. A major study conducted by the South Korean government in 2014 concluded that the country faces “natural extinction” by the year 2750 if the then-birth rate of 1.19 did not rise, a study that has obvious parallels in Japan.

Meanwhile, high life expectancy in both countries means that elderly people make up a progressively larger proportion of the population over time. Projections by the United Nations show Japan’s population of 126 million shrinking by 40 percent by 2080. Korea’s population of 51 million could also shrink by 40 percent, potentially reaching pre-Korean War levels (eighteen million) if corrective action isn’t taken in the near future. The aging problem in Japan has led to the sale of adult diapers surpassing that of baby diapers. And in South Korea, some universities have begun offering classes on dating and relationships to help combat falling marriage and fertility rates. Even then, a recent survey found that only 68 percent of female South Korean college students intend to marry, with most respondents citing “dual burdens at home and work” as the biggest obstacles to raising children.

For both countries, the impending population collapse is a threat to economic productivity, growth, social stability, and national defense. One possible answer—liberalizing immigration policies—is unpopular in largely homogeneous Japan and South Korea, while government efforts to increase fertility rates have proven to be expensive and ineffective. For these reasons, economists have formulated an array of policy options such as implementing phased retirement schemes, allocating funds to childcare facilities, raising the ages for retirement and pension eligibility, and even investing in artificial intelligence to meet caregiving needs.

Regardless of the specific policy solutions implemented, sharing know-how and innovative technological solutions may help Japan and South Korea realize there’s much to be gained from cooperation—and together they might potentially shape global approaches to aging populations.

Powerful Economies with Room to Integrate and Thrive

For all the historical rancor between the two over the past decades, Japan and South Korea have enjoyed massive economic growth. Japan is the world’s third-largest economy, with a GDP per capita of $39,286. South Korea, the world’s eleventh largest economy, has slowly caught up with its neighbor over the past two decades, reaching a GDP per capita of $31,362. At the same time, both countries have fostered entertainment industries worth billions that have projected South Korean and Japanese cultural influence far and wide.

On the people-to-people level, South Korea sends more tourists to Japan than any nation except for China, while South Korea’s tourism industry (worth $71.4 billion) benefits from Japanese tourists, whose numbers are exceeded only by those from China. Finally, Japanese suppliers and South Korea’s tech industry have become increasingly interdependent, with a sizeable chunk (43.9 percent) of South Korea’s hydrogen fluoride—necessary component in electronics—coming from Japanese firms alone this year.

There is room for improvement. For one, even though both boast robust electronics industries and are geographical neighbors, only 4.5 percent of South Korean exports were bound for Japan in 2017. At the same time, only 7.8 percent of Japanese exports were bound for South Korea. Indeed, many of these gaps can be explained by China’s growing economy, which attracts investment from South Korean and Japanese firms. Still, increasing economic integration, such as through a potential South Korea-Japan-China Free Trade Agreement (which has been in the works since 2013, making little progress) could generate nearly $16.3 billion in joint economic benefits in the first decade alone, according to a report by the Korea Institute for International Economic Policy.

Furthermore, both leaders have real reasons to reverse course. In June 2019, Abe stood before world leaders at the G20 summits in Osaka, where he stressed the importance of free trade in a rules-based international system. Such a statement now stands in stark contrast to his government’s confrontation with South Korea, risking the health of Japanese companies and his country’s reputation as a global economic leader. Meanwhile, South Korea’s economy recently contracted for the first time since the global financial crisis, coinciding with double-digit youth unemployment and some of the lowest happiness levels in the world. It would be in South Korea’s interest to seek ways to combat stagnation and spur growth at home, rather than doubling down on a costly trade war with Japan. Given the damage to the economic foundations of the relationship created by both governments’ actions, however, it would be difficult to get back to status quo ante.