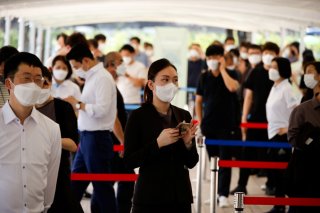 Daily new coronavirus cases in South Korea continued their relentless surge, as the country is now banking on more robust virus curbs in and outside the greater Seoul area to slow the spread.

In response, South Korea has decided to implement a semi-lockdown in the greater Seoul area, banning gatherings of more than two people after 6:00 p.m. and shutting down entertainment establishments, including nightclubs and bars. Customers can only dine in at restaurants until 10:00 p.m. Moreover, all schools in the greater Seoul area will transition to online classes until July 25, and private institutes will be required to close by 10:00 p.m., the Education Ministry noted.

For most areas outside the capital region, gatherings of more than eight people have been banned and restaurants and bars must close by midnight.

“The average numbers of new cases from regions outside the Seoul metropolitan area have more than doubled from last week,” Prime Minister Kim Boo-kyum said during an intra-agency COVID-19 meeting on Wednesday, adding further curbs would be enforced in some high-risk areas in the future.

For much of the course of the ongoing pandemic, South Korea has been considered one of the success stories with its rapid concerted response between the government and ordinary citizens. To date, there only have been about two thousand deaths linked to the virus, but the fast-spreading Delta variant is causing more concern.

From July 4 to July 10, the new variant accounted for 30.7 percent of all new cases in South Korea, the KDCA said.

“Delta is the most transmissible of the variants identified so far,” WHO Director-General Tedros Adhanom Ghebreyesus said in a recent press briefing.

He added that while viruses are expected to mutate, “we can prevent the emergence of variants by preventing transmission.”

Adding to the alarm is the fact that only about 31 percent of South Korea’s population have received their first shot of COVID-19 vaccines, which hasn’t increased much from the 29.8 percent at the end of June.

According to the KDCA, roughly 6.2 million people have been fully vaccinated, representing 12 percent of the population.

The nation’s vaccination drive, though, is expected to pick up later this month when it begins inoculating individuals in their 50s. Furthermore, about thirty-five million doses of vaccines from AstraZeneca, Pfizer, Moderna, and Janssen will start to be shipped in beginning on Friday.