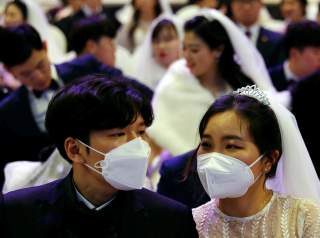 Yet another regional development illustrates South Korea’s tough political geography. The outbreak of the coronavirus has provoked deep anxiety in Seoul, over both its economic fallout and its geopolitical impact. Surrounded on all sides by larger states (China, Japan, and Russia), plus the Orwellian North Korea, the Republic of Korea has traditionally faced tough counter-vailing pressures on regional issues like corona.

China has reacted impatiently to countries that have considered travel bans against it over corona. Many larger or far away states have simply ignored these concerns and proceeded with bans and embargoes. The US, Japan, and many European countries are pursuing an ever-tightening series of restrictions on travel to and from China. Nationals are being told to leave, and many western and Japanese airlines are ceasing travel for months to come. The growing discussion of corona’s economic impact on business television networks stems from this disruption. If corona turns into a genuine pandemic, spreading around the world for months, it may redirect investment, trade, tourism, and so on from China. This was the gist of US Commerce Secretary Wilbur Ross’ importune remark that corona will bring jobs to the US.

South Korea has waffled on these sorts of restrictions. Its dominant trading partner is China. It exports more there than to the United States. Seoul’s current government has sought an outreach to China for many reasons and does not wish to burn this bridge. A rapprochement with China would reduce its dependence on US security guarantees, which the current government finds both irksome and now unreliable under US President Donald Trump. Better terms with Beijing also help forge this government’s much-sought new path with North Korea. And finally, better relations with China offers an alternative to improving relations with Japan, a deeply divisive topic in South Korea because of Japan’s history of imperialism in Korea.

More generally, South Korea is compelled by sheer proximity and size to respond to Chinese preferences, and here we see corona illustrating its coming strategic dilemma. South Korea is a medium-sized power in a tight neighborhood. Because China, Russia, and Japan loom on its doorstep, it is hard for South Korea to throw its weight completely behind a coalition against one or the other. Throughout Korean history, at least one of these powers was a dominant regional state or otherwise a rising power. This led to repeated intervention in Korean affairs, a point often made in the press here.

At the moment, Russia and Japan are weakened. Russia’s weight in East Asia has slumped badly since the implosion of the Soviet Union. Japan too is struggling. Its population slipped into absolute demographic decline several years ago, and its economic growth has been fragile for decades. This Russian and Japanese slippage gives South Korea some space. And South Korea’s own economic performance too adds to this. South Korea’s GDP is now equivalent in size to Russia’s, a huge improvement in its regional positioning.

But South Korea cannot catch a break. Where China was once trapped in Maoist stagnation, Beijing has, of course, exploded into the world’s second-largest GDP over the last forty years. Just as Russia and Japan slipped and South Korea took off, so did China. And of course, the existence of North Korea and its unique relationship with China only worsens the problem of rising Chinese power. A united Korea would arguably have the economic weight of a great power, but divided, Korea is weakened, and its errant half has a curious relationship with Beijing.

All this is to say that South Korea’s confused response to China over corona is likely to be repeated on many regional issues going forward. South Korea is deeply riven domestically over such questions. The right here supports an aggressive travel ban against China, routinely calls out Beijing over its forbearance regarding North Korea, and seeks an enduring relationship with the US. The left is more circumspect, hoping to walk between the raindrops of the US and Chinese pressure. This has led to the current flap in the papers here over whether the government of President Moon Jae-In is endangering South Koreans by not instituting a total ban.

At issue is not really corona though. South Korea has a good record containing and responding to such outbreaks. It handled both SARS and MERS in the last twenty years quite well. Infections were kept down and cleanliness measures widely promoted. The response to corona has been similarly aggressive. Schools, for example, are starting the coming semester two weeks late, and all have tables with hand-sanitizer at every entrance. Instead corona has become a proxy for the larger debate over South Korean grand strategy regarding China – bend somewhat to pressure in hopes of avoiding a decisive choice between Washington and Beijing, or take a harder line on China as a rising threat.