South Korea Is Still Having Big Problems With Corruption 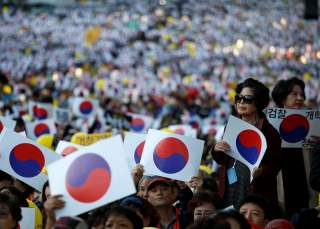 Last week, Cho Kuk, the disgraced Justice Minister of South Korea, resigned after a controversial month at the helm and a wave of discontent that spurred nationwide protests. President Moon Jae-in brought in Cho to reform the nation’s prosecution, including improving oversight of investigations, banning excessively long interrogations, and limiting the scope of prosecutors’ direct investigations. But shortly after his nomination, Cho and his family became embroiled in a massive corruption scandal, which proved to be his undoing. Even though Cho is no longer tasked with the leading the Ministry of Justice, his scandal reveals deeper problems within the Moon administration: a commitment to a dangerous policy toward North Korea, strangulation of the free press, and a vendetta against conservative politicians.

To understand how a figure as controversial as Cho could ascend to such a high position in Moon’s cabinet, we need to go back to one of Moon’s early election promises—ridding the country of what he called “deep rooted evils”  and to rebuild after the scandal-ridden tenure of previous president Park Geun-hye. Superficially, it was a pledge to eradicate corruption, but it has quickly become clear that he was only referring to the corruption of the opposition party, the Liberty Korea Party (LKP).

In many respects, Cho embodies the very corruption Moon pledged to eradicate. Cho’s own daughter gained admission to a top university after being named first author on a scholarly medical paper upon completing a two-week internship as a high school student. Cho’s wife, a university professor, allegedly forged a college award for her daughter under the name of the university president, helping her gain admission to medical school. A close relative of Cho’s is accused of rigging stock prices, embezzling billions of won, and arranging hefty investments for Cho’s wife and children. And yet, Moon had no qualms in allowing Cho to head the Ministry of Justice, the same agency now investigating his family.

Much of the South Korean public was outraged. Members of the LKP publicly shaved their heads in protest, and the opposition claims that millions came out to call for Cho’s ouster. While Cho certainly had his own league of supporters, not even Moon himself left the scandal unscathed—some put his approval rating as low as 32%, with 54% believing that Moon was wrong to move forward with Cho. But South Korean presidents have tremendous leeway when it comes to nominations, and without an adequate system of checks and balances, presidents can fill positions however they see fit. Moon needed neither the approval of the national assembly nor that of the public to push Cho through.

Curiously, the protests and Cho’s subsequent ouster have not enjoyed much press, especially outside of South Korea. Labor unions at the Korea Broadcasting Corporation and Munhwa Broadcasting Corporation (two of the largest in South Korea) have complained that they were not able to adequately cover Cho’s scandal and that reporters were under pressure from senior editors to protect him. Both broadcasting companies were taken over by the Moon administration last year. Even reporting in the West often neglects the scale of South Korea’s outrage toward Cho, portraying the anti-Cho protestors as an insignificant fringe group.

But the problem with Cho lies beyond his abuse of power and corrupt family. Once a member of the Socialist Workers’ League of Korea (Sanomaeng), an organization that called for the armed socialist revolt in South Korea, Cho failed to repudiate it, claiming he was neither “proud nor ashamed.” He recently argued that South Korea “needed” socialist policies.

If this sounds familiar, it’s because it’s not the first time we’ve seen this in Moon’s cabinet. Im Jeong-seok, Moon’s former chief of staff, was also a left-leaning activist who facilitated “flower of unification” Lim Su-kyung’s illegal trip to Pyongyang in 1989. Her visit was a major propaganda win for the North, and Lim, a former lawmaker in Moon’s own party, gained notoriety once again in 2012 for drunkenly cursing out a North Korean defector. The problem here is not just Cho, but the kind of company Moon keeps. In addition to his commitment to eradicating “deep-rooted evil,” Moon is equally determined to advance a policy of engagement with North Korea, and he does so by filling top positions with those sympathetic to his cause. Even North Korea’s Rodong Sinmun excoriated the LKP’s attacks on Cho, perhaps fearing a return to conservative power in the South.

While Cho’s tenure as justice minister is over, the problems plaguing the Moon administration, and South Korea, are not. But perhaps there is a moment for change. In 2020, South Koreans will take to the polls to vote in the National Assembly elections. Faced with an uphill trade battle with Japan, a failing North Korea policy, and now the embarrassment of Cho Kuk, it is likely Moon Jae-in and his party are headed for trouble.