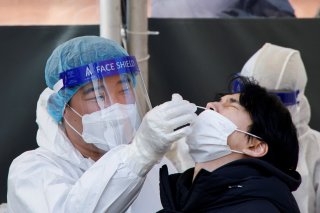 Cases and hospitalizations related to the Omicron variant may be falling in the United States, but it is a different story in South Korea. COVID-19 infections there remained above 50,000 for the second consecutive day.

According to data compiled by the Korea Disease Control and Prevention Agency (KDCA), South Korea reported 53,926 new COVID-19 infections on Friday—a tally that is nearly double the 27,438 reported just a week earlier. On Thursday, the nation logged 54,122 cases.

According to Yonhap News, new infections in the country have skyrocketed by nearly 400 percent over the past two weeks. Well over 90 percent of all cases were caused by the Omicron variant. Health authorities there are now warning that the daily caseloads could eclipse 170,000 by the end of February.

An even more pessimistic view is held by the National Institute of Mathematical Sciences, a state-run think tank. It projected maximum daily caseloads could hit 360,000 by early March.

A former head of the Korea Centers for Disease Control and Prevention Agency said that local health authorities made a mistake when they stated that the health impact of Omicron would be similar to that of the seasonal flu.

“It’s not possible to treat Omicron like we do the seasonal flu, no,” Dr. Lee Jong-koo, who led the health agency during the 2009 swine flu pandemic, said during a conference on Friday organized by a COVID-19 civic group that is associated with the Consumers Union of Korea.

“Omicron not only spreads much faster than earlier variants, it is also likely to cause severe disease than the government hoped,” he said.

According to the Korea Herald, the Ministry of Health and Welfare said on Feb. 4 that the nation may start treating the new variant like it does the seasonal flu. Following that announcement, Cheong Wa Dae officials told the media that it was anticipating that the virus will soon become endemic.

“Two conflicting messages are coming from the government,”  said Dr. Oh Ju-hwan, a professor of public health policy at Seoul National University, at the same conference. “One is that (Omicron) is similar to the flu and that it’s OK to go about our normal lives. In fact, government messaging so far has made the virus out to be as unthreatening as the common cold, not even so much as the flu,” he added.

With this mindset to tackle the disease, Lee is concerned that hospitals and clinics will become overwhelmed in the coming weeks.

Omicron has spread across the country “more than 10 times as rapidly as Delta did. In about two and a half months since Omicron was first detected in Korea, daily case numbers have jumped to 50,000. By comparison, Delta, which was first spotted here in April, peaked at around 7,000,” he noted.

“The government seems to have designed the Omicron response strategy around the assumption that hospital admissions would not increase as much,” he concluded.