South Korea's ‘Living With Covid-19’ Policy Is a Total Bust 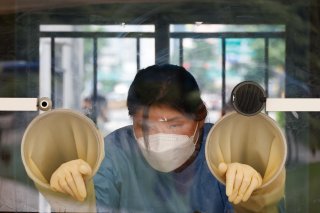 Two weeks ago South Korean president Moon Jae-in announced his administration would continue its “Living With Covid-19” policy even in the face of record caseload. Now he has reversed his position.

The number of new daily cases has continued to climb from an average of 4,000 a day at the end of November to over 6,700 a day midway through December. The policies the Blue House had hoped would slow the surge haven’t been effective. Vaccine pass apps crashed on the first two days of implementation when usage was too high. Although home treatment has been expanded, the bed utilization rate in Seoul hospitals has again exceeded seventy-five percent. The public’s approval rating of the government’s response to the pandemic tumbled from fifty-seven percent in November to forty-four percent today.

The causes of the government’s failures were many. The authorities underestimated both the increase in the spread of coronavirus and the increase in severity of cases that took place after the social distancing restrictions were relaxed and did not prepare sufficient treatment units. The preventative effect of the vaccines for the elderly was seen to have decreased significantly three to four months after vaccination, and the booster shot campaign only began in earnest after the spike was noticed.

To try to slow the surge now, the government has issued harsh new edicts restricting private gatherings at commercial businesses to four vaccinated people and re-instituted a 9:00 PM curfew for dining and entertainment establishments. However, groups as large as three hundred are still allowed to gather for “events,” such as weddings and baby’s first birthdays. The measures will expire or be renewed on January 2.

Health experts said the effect of the new restrictions will be extremely limited. “They won't drastically slow down the spread until the year-end. Things may get worse given the cold winter weather and the increasing cases of the Omicron variant,” Korea University Professor of Medicine Kim Woo-joo said.

The curfew, however, could have a dramatic impact on the bottom line of restaurants. Bobby Sul, whose OBOK Restaurant serves pork soup in the Haeundae Beach area of Busan, estimated to me it could cause sales volume to decline by a fourth. Sul is not taking part in any strikes or protests, and he expressed understanding of the difficulty of the government’s position.

“What is the rate it infection in terms of age groups? My hypothesis is that a high percentage of cases are coming from the elderly and unvaccinated [including students]. If that is the case, then I don’t think a curfew would be helpful,” he said. “At the same time, if there are asymptomatic cases being transmitted, then it could be helpful. If the employees of nursing homes are unknowingly transmitting it, then, yes, the curfew could be helpful.”

Korea Disease Control and Prevention Agency (KCDC) statements and press reports have stated that the spike is most pronounced amongst the elderly and unvaccinated.

But other restaurant owners cited in the Korean press voiced outrage (mostly anonymously). Group reservations during the busy New Years' celebration period have been canceled en mass, an operator in Gangwon province said.

The manager of a Japanese-style bar in Seoul said to Munhwa Ilbo, “Setting the curfew at 9:00 PM instead of midnight is too harsh.” The limit on the total number of customers in those three hours adds up.

"How many times do you repeat the countermeasure of peeing on your feet?” the boss of a soup restaurant in Daegu said. Compensation hasn’t matched losses, he said.

The National Self-Employed Emergency Response Committee called for rescinding social distancing measures. They are planning a rally in Gwanghwamun Square on December 22. In a statement, the group said, "The government has once again shifted its responsibility to self-employed people.”

Six other trade groups representing restaurants, pubs, karaoke, and PC cafes have discussed going on strike. Min Sang-heon, a representative of the Covid-19 Victims’ Business Federation said, “If the government continues to take control measures in this way, self-employed people like us will have no means.”

One proprietor of a Chinese restaurant in Seoul said the timing was troublesome. Last year, the government also imposed new social distancing rules just before New Year’s. The fact that the short-lived normalization policy began on November 1, one day after Halloween, was also remarked upon by many at the time.

The Moon administration faces a conundrum. On the one hand, if the current trends continue, Korean epidemiologists warned new cases could rise to 20,000 a day. On the other hand, the mounting losses for small business owners and the strained feelings of consumers are unsustainable. Shutting things down before the holidays might blunt the effect of an expected new surge, but it will also blunt the aid promised to suffering proprietors at long last.