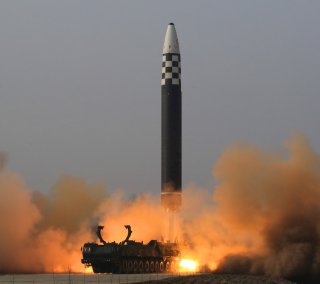 Not long after North Korea fired artillery at South Korea on Sunday, the president of South Korea sat down to watch a movie with his wife.

According to the Yonhap News Agency, shortly after the artillery launch, the newly-elected President Yoon Suk-yeol sat down in a Seoul theater to watch the film Broker.

While some criticized President Yoon for watching the movie at that time, he defended himself.

According to the Associated Press, South Korea’s military revealed over the weekend that “it detected several flight trajectories believed to be North Korean artillery.”

“While bolstering our military's surveillance and vigilance, South Korea and the United States are working closely and maintaining a thorough readiness posture,” the South Korean joint chiefs of staff said Sunday, per a separate Yonhap story.

Per CNN, South Korea will “dramatically” increase its defenses due to concerns about North Korea ramping up nuclear testing.

“Our government will strengthen capabilities to better implement the US extended deterrence and will dramatically enhance response capabilities of the Republic of Korea military to deter North Korea’s nuclear and missile threats,” Defense Minister Lee Jong-Sup said this week at a security forum in Singapore.

The South Korean government also vowed to work closely with its allies, the United States and Japan.

“We remain open to future diplomacy–and fully prepared to deter and to defeat future aggression,” U.S. defense secretary Lloyd Austin said at the same forum, in Singapore, per CNN.

Broker, a Korean-language film written and directed by Japanese director Hirokazu Kore-eda, won the Ecumenical Jury Award and the Best Actor Award at the Cannes Film Festival in May. That latter award went to actor Song Kang-ho, who previously starred in the South Korean film and Best Picture Oscar winner Parasite.

The Hollywood Reporter called the film “an egalitarian work in which every one of the key cast makes an indelible impression, right down to the adorable baby boy who’s the story’s catalyst.”