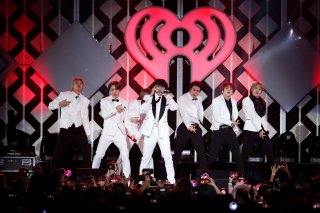 Breaking out of the East Asian market in the mid-2000s, K-Pop has surged in popularity to become one of the world’s fastest growing music genres. It is also the spear tip of South Korea’s thriving cultural export industry, boasting a net worth of approximately $5 billion and projected to generate tens of billions of dollars for South Korea’s economy in the coming years.

But what exactly is K-pop, and how did this upstart genre outgrow its humble roots to become a global cultural phenomenon with a loyal western following?

The rise of K-pop is relatively easy to date. “Pop music” is an umbrella term for countless commercial genres since the mid-twentieth-century, but K-pop refers to a specific aesthetic and performance style that grew out of Korean adaptations of American popular music in the early 1990’s. The birth of K-pop is commonly traced to the group Seo Taiji and Boys, whose unique blend of hip-hop, rock, and tight dance choreography took the South Korean music scene by storm. Several major music studios, beginning with SM Entertainment in 1995, were founded to capitalize on this growing untapped market. The earlier grunge elements of K-pop were replaced with a focus on mass-marketable idols, the first of which became the wildly successful boy band H.O.T.

As K-pop crystallized into a well-established musical genre over the next decade, it came to be defined by several industry traits that help explain its competitiveness as a cultural export: an impressively high standard for choreography and vocals, an accessible and widely appealing aesthetic, an effective network of Seoul-based producers capable of putting out a quality product at a fast pace, and generous government support.

At the core of what gives K-pop its characteristic polish is the “trainee system”: a process developed by SM Entertainment founder Lee Soo-Man for scouting, refining, and promoting idols. After being selected by a rigorous audition process involving hundreds of candidates, the prospective idol is run through an extensive training period. This period, which can last from months to years, involves schooling in vocals, rapping, and dancing, as well as English language classes. Idol trainees are expected to endure a grueling rehearsal schedule and must prove that they can maintain a company-approved public image. Those who make it through to the end are finally offered a contract, which can take the form of becoming part of a group or—for a select few—being supported in a solo venture.

The trainee system has ensured that the K-pop industry keeps on churning out a steady supply highly talented performers, but it’s not cheap; training an idol can cost just shy of $30,000 per month according to industry insiders, while the process of making assembling and signing a K-pop group from beginning to end costs millions of dollars. Government support has been a crucial means of offsetting these costs, with the Culture Ministry establishing an entire department to oversee K-pop-related matters. Aside from fostering a growth-friendly regulatory climate, the Culture Ministry has injected the K-pop industry with hundreds of millions of dollars in grants meant to foster Korea’s tourism and cultural export sectors.

There is no single factor to account for the breakout success of K-pop, which stems from a constellation of propitious circumstances and sound strategies pursued on the level of management. In just over three decades, K-pop has gone from a fringe phenomenon to a lucrative and globally renowned network of state-sponsored producers and performers—an unmitigated success on South Korea’s longstanding path to become a leading soft power exporter.