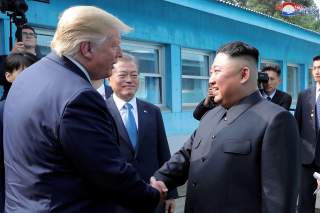 President Donald Trump and North Korean leader Kim Jong-un agreed in their impromptu meeting at the demilitarized zone (DMZ) between the two Koreas on June 30 to revive working-level talks over North Korea’s denuclearization. If the bilateral negotiations resume as scheduled later this month, then U.S. negotiators could face potential time constraints tied to the political calendar and a complex task.

The meeting between Trump and Kim at the DMZ appears to have injected much-needed political momentum into diplomacy between the United States and North Korea, which has been stalled since the failed Hanoi summit in February. The two leaders emphasized their good personal relations in the DMZ meeting, which was high in symbolism even if limited in substance.

But the reliance on personal chemistry between Trump and Kim has its downside. It means that the process is highly dependent on the personalities of the two leaders, and that the U.S. presidential election in 2020 could have an especially important role to play for the diplomatic process. In fact, North Korean concern about this key event may have been behind Kim Jong-un’s decision in April to set an end-of-year deadline for diplomacy with the United States.

This could mean that U.S. negotiators will face time constraints. North Korea may only be willing to seriously negotiate a deal over the short term while it can be implemented by the Trump administration.

That does not bode well for denuclearization talks, which are better measured in weeks and months rather than in days. History supports this point. In the case of the 1994 Agreed Framework, which was the first denuclearization agreement the United States had with North Korea, it took negotiators eighteen weeks to sign a document after a breakthrough was achieved at a higher level. In the case of the Six Party Talks in the 2000s, it took the parties almost seventeen months to reach an agreement on initial steps after adopting a joint statement on the goals of denuclearization.

This is despite the fact that the task of denuclearization was simpler than it is today. At the time the Agreed Framework was signed, North Korea did not have the arsenal of nuclear weapons it has today and negotiators had to focus only on shutting down and discarding North Korea’s plutonium facilities in Yongbyon. The Six Party Talks process tried to close the same facilities in Yongbyon, although the efforts collapsed due to disagreements between the United States and North Korea over the completeness of North Korea’s declaration of its nuclear programs.

Today, U.S. negotiators have a wider set of issues to deal with. This includes a larger Yongbyon nuclear complex which includes close to four hundred buildings and is capable of producing not only plutonium but also highly enriched uranium (HEU), another type of fuel for nuclear weapons. The negotiators must also deal with North Korea’s suspected HEU production facilities outside of Yongbyon as well as North Korea’s existing nuclear weapons and missiles that deliver them.

In addition, U.S. officials may find it difficult to hold meaningful talks. Their ability to achieve positive results could depend on whether their North Korean counterparts are empowered with the authority to negotiate. So far, North Korea has treated denuclearization as a topic to be dealt with directly by Kim Jong-un rather than the country’s negotiators, who have been charged only with overseeing broader bilateral and humanitarian issues. One potential bit of good news is that the North Korean negotiating team will be renewed. If the new North Korean Foreign Ministry-led team is given more authority, then that could be further good news for the U.S. negotiators.

Of course, for a deal to be negotiated, the United States may also need to be flexible. Whether the U.S. negotiating team will be given the authority to make compromises in exchange for North Korean denuclearization steps will likely be key too.

Amid these challenges and uncertainties, U.S. negotiators face the task of designing an agreement that will endure beyond the U.S. presidential election in 2020. President Trump maintains that he is in no hurry to reach a deal with North Korea. But the window of opportunity for his negotiators may not be as wide as he implies.