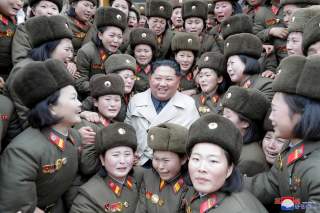 The war of words continues between North Korea and the U.S., with the latest threats issued by Kim Jong-un in Pyongyang during the last days of December. Mr. Kim complained about Washington’s “hostile policy” toward the regime, decried Western sanctions, and capped it off by promising to unveil a new strategic weapon.

Much of Kim’s speech focused on North Korea’s economic struggles, which he repeatedly blamed on the sanctions. KCNA Watch quotes Kim as complaining that “[the U.S.] applied the most brutal and inhuman sanctions against and posed the persistent nuclear threat to the latter over the past seven decades....”

But what is truly brutal and inhuman is the Kim regime itself.

Kim oversees the arbitrary detention of between 80,000 to 120,000 individuals in political prison camps. Those consigned to these modern-day gulags are essentially given a protracted death sentence – they die in captivity due to hard labor, starvation or malnutrition or, in some cases, torture.

At least tens of thousands, and possibly as many as a million people have died in these camps, all while Kim and his party officials live in luxury.

In addition to investing heavily in luxury goods and facilities for its own use, the regime has diverted much-needed resources toward the development of its missile and nuclear programs According to the U.S. Department of State, North Korean military spending averaged $3.5 billion annually between 2006 and 2016.  In 2012 alone, North Korea spent $300 million on luxury facilities, $644 million on luxury goods, and an estimated $1.3 billion on its missile program. In 2015, the U.N. World Food Program asked foreign donors for only $111 million in contributions for North Korea.

These figures demonstrate that North Korea could feed its people, but it chooses not to. This makes Kim Jong-un’s claims that sanctions are the primary cause of hardship in North Korea even more disingenuous.

Continued complaints issued by the North Korean leadership should embolden the Trump administration to return to a maximum pressure policy – and this time, make it truly maximum.

In Singapore, President Trump suggested that he had a list of 300 North Korean individuals and entities that could be sanctioned. But, he added, he was not going forward with sanctioning them, so as not to impede the ongoing negotiations. The U.S. has also stopped short of sanctioning Chinese banks responsible for bankrolling North Korea’s elite.

Equally significant is the silence that has befallen U.S. officials, including the president, when it comes to denouncing North Korea’s human rights abuses. A vice-presidential speech on that topic was cancelled a year ago. Last month, the U.S. withdrew its support for a UN Security Council meeting to investigate North Korean human rights abuses—a meeting that the U.S. had organized.

President Trump was once quite outspoken on the cause for freedom in North Korea, but his silence on that front now constitutes a lack of U.S. leadership to recognize the strategic significance of raising human rights.

No one knows what 2020 may bring. But what is certain is that human rights violations continue in North Korea. For negotiations to be successful, they should not focus merely on a single track, but should incorporate human rights as a component of broader negotiations. That means getting sanctions right – and not only the sanctions that relate to Pyongyang’s weapons programs, but also the sanctions the U.S. institutes on human rights grounds.