Trade Tensions: Why Shinzo Abe Has a Critical Role to Play 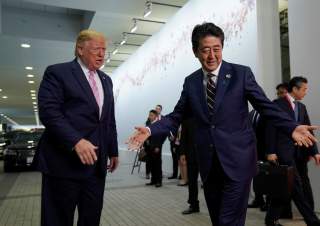 Relations between Seoul and Tokyo have reached a new low, adding new cracks to the postwar international order at just the wrong time. The immediate background of the latest spat was the South Korean Supreme Court’s 2018 decision to uphold a lower court’s ruling ordering a Japanese firm to compensate four Korean citizens who served as forced laborers during Japan’s colonial occupation. The Japanese government argues that a 1965 Normalization Treaty signed between the two countries precludes such litigation. As tensions surrounding the lawsuit escalated, the administration of Prime Minister Shinzo Abe imposed new regulations that will slow the approval time for the import of three chemicals vital to South Korea’s semiconductor firms, a move that could inflict serious harm on one of Korea’s biggest industries. The South Korean government then filed a complaint at the World Trade Organization. The Abe administration has hinted at additional trade restrictions, while the administration of South Korean president Moon Jae-in mulls its options.

The Japanese government has good reason to be frustrated with Seoul. The South Korean government has resisted Tokyo’s proposal to deal with the matter of forced labor through arbitration consistent with the 1965 agreement and also reneged on a December 2015 deal with Japan to settle the sensitive issue of compensation for Korean women coerced into sexual servitude, known euphemistically as “Comfort Women.”

But using strong-arm economic tactics can only backfire on Tokyo. By resorting to the trade measures that one might expect from President Donald Trump or Chinese president Xi Jinping, the Abe administration is on the verge of committing an own-goal by diminishing Japan’s well-earned credibility, undermining its own foreign policy, and creating precedents that will weaken the already teetering global trading system that is so vital to Japan’s own interests. In fact, despite its ostensibly nationalist orientation, the Abe administration has fully embraced the idea of a “rules-based order” as an organizing principle behind its foreign policy.

Already, Abe’s export controls have invited criticism from observers, who note that the measures may violate World Trade Organization’s (WTO) rules. Japan has been a tremendous beneficiary of and a consistent advocate for multilateralism in trade and other matters. The WTO has provided Japan with a shield against more powerful countries, first the United States, and over time, China. When China retaliated against Japan over a territorial dispute by imposing restrictions on rare earth metals vital to Japan’s electronics industries in 2010, Japan along with the European Union and the United States challenged the export ban at the WTO and secured a favorable ruling.

In the age of Trump, Japan has emerged as a vocal champion and stabilizing force of the global order even as the United States has turned against it. After Washington withdrew from the Trans-Pacific Partnership (TPP)—a twelve-country trade agreement spanning the Pacific—Japan helped revive negotiations and bring to fruition a new deal that excluded the United States: The Comprehensive and Progressive Agreement for Trans-Pacific Partnership (CPTPP). Japan also inked a trade and investment deal with the European Union (EU) that took effect this year, sending a strong signal to the world that both the EU and Japan remained committed to economic openness. Currently, Japan is playing a critical leadership role in much-needed multilateral talks to update the WTO. And at the end of June, Japan chaired the G-20 Summit in Osaka, during which participating states affirmed the importance of open markets and "a free, fair, nondiscriminatory" trade and investment environment.

All of this makes the Abe administration’s actions so surprising, and troubling. Not only did the Abe administration announce the export controls immediately after hosting the G-20, it resorted to unilateral action, used trade as a lever to retaliate over other issues, invoked questionable security concerns, and likely violated international trade law.

There is plenty of blame to go around for the sorry state of Japan-South Korean relations. While the recent round of recriminations has been particularly acrimonious, historical grievances have bedeviled Japan-South Korean relations for many decades. This has frustrated U.S. officials, too, as they have sought to strengthen ties between the countries to provide a united front to check the worst impulses of North Korea and counter the influence of China. While quarrelling between Tokyo and Seoul may serve the interests of Pyongyang and Beijing, they do little to advance the cause of liberalism in East Asia and beyond. Larger grievances rooted in history won’t be settled easily or quickly, but given the rapidly rising stakes, it is now time to put a floor on the downward spiral.

The Abe administration should take steps to ratchet down the trade tensions. Weaponizing trade as a way of settling unrelated disputes is on the rise these days, but its normalization is a dangerous trend. The Japanese government has attempted to argue that the export controls are simply security measures, but in emails sent to reporters it has also attached a fact sheet on the forced labor dispute. Tokyo should take economic coercion off the table and seek other ways to deal with historical issues.

More than ever, the world needs Japan, the third-largest global economy that has the well-earned respect of the international community, to help reinvigorate the faltering trade system. The WTO regime’s norms, rules, and orderly system for settling disputes, in spite of its well-documented imperfections, offers the best alternative to the might-makes-right politics that increasingly threaten the postwar multilateral liberal order that the United States seems to be abandoning. But this system will only be robust if major economies like Japan and the EU continue to believe and adhere to it.

Dialogue through official channels and Track-II diplomacy are far better ways to deal with the past. South Korea must of course play its part in de-escalating the situation. President Moon should exercise leadership to help rein in rising nationalism and resist playing the anti-Japanese card. Furthermore, his government will have to seriously consider what it can do to repair relations with Japan in the wake of the Supreme Court ruling starting with considering the Japanese government’s proposal to use arbitration to settle this dispute.

Tokyo and Seoul are vital U.S. allies, hosts to the largest U.S. troop presence in the region and central to the alliance system that has provided stability to the region for the past seven decades. All parties, including the United States, have an interest in improving relations. Closer cooperation between East Asia’s two thriving democracies can also provide a bulwark against encroaching authoritarianism and refocus attention on solving shared challenges in the region and beyond.

Mieczysław P. Boduszynski is Assistant Professor of Politics and International Relations at Pomona College. He was previously a Foreign Service Officer with the U.S. Department of State. Find him on Twitter at @MietekB.

Gene Park is Director of the Global Policy Institute and Associate Professor of Political Science and International Relations at Loyola Marymount University. His research focuses on political economy and Japanese politics and foreign policy.