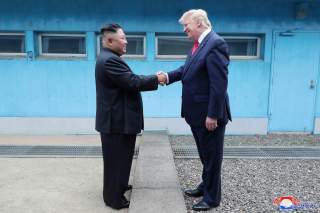 On Sunday in the “Peace Village” of Panmunjom in the Demilitarized Zone, President Donald Trump stepped over the Military Demarcation Line and took twenty steps into North Korea with Kim Jong-un, the dictator of the Hermit Kingdom. The pair immediately walked back another twenty into the South, where they met for fifty minutes.

The brief visit by the president of the United States of America to the Democratic People’s Republic of Korea delighted Kim, who smiled broadly and constantly. Almost certainly, the forty-step outing alarmed Xi Jinping, the Chinese ruler, who was not in attendance.

Trump is now the first sitting American leader to go to North Korea. Yet that was not the important element of Sunday’s events. In all probability, he planned those activities to both rile Chinese leaders and upend relations in North Asia.

The American president on Saturday, just before his much-anticipated meeting with Xi in Osaka at the G20, tweeted about the possibility of his meeting Kim in the DMZ.

The timing of the tweet is unlikely to have been a coincidence. There was speculation that at his meeting with Trump, Xi was going to offer cooperation on North Korea as a means of obtaining concessions on other issues. That is surely why Xi’s first trip to North Korea took place in June, just before the G20. Beijing and Washington, of course, are locked in what most observers term a “trade war,” the primary topic of conversation at the Trump-Xi meet in Osaka.

With the tweet, however, Trump seemed to be saying to his Chinese counterpart that he did not need Beijing’s help on North Korea.

Trump, from all appearances, is done with Beijing on North Korea. In his first year in office, 2017, the American leader continually sought China’s cooperation. By the end of that year, Trump was expressing exasperation. In December, for instance, Trump tweeted that he was “very disappointed” in China, which was “Caught RED HANDED” violating sanctions.

In March of last year, President Trump, taking advantage of Seoul’s efforts, cut Beijing out of the process by declaring his willingness to talk to the North directly.

Since then, Beijing has been scrambling to keep itself relevant in North Asia. That March, Xi summoned Kim to Beijing, the first of their five meetings. By making Kim come to Chinese soil four-straight times—March, May, and June of last year and this January—Xi was trying to convince Trump that Beijing held the keys to Pyongyang.

Trump, to his credit, has not taken the Chinese bait. He has often boasted of his relationship with “Chairman Kim.” The two “fell in love,” Trump said last September, eliciting groans in Wheeling, West Virginia at one of his campaign-like rallies. Despite cool receptions in America, Trump has kept up the affectionate language and his defense of the North Korean dictator.

Trump now seems to have an inexhaustible amount of patience for Kim. At the Ottawa G7 last June, Trump said he was going to give the North Korean a “one-time shot” to disarm. Since that revealing statement, Trump and Kim have met three times: June of last year in Singapore, Hanoi this February, and this week at the DMZ.

During this thirteen-month period, Trump, as a show of goodwill, has essentially let up sanctions pressure on Pyongyang.

Kim, however, has not reciprocated the gesture. Instead, Kim has pressed what he has seen as his advantage, increasing the rate of production of fissile material and upgrading ballistic missile and nuclear weapons facilities. In May, he even violated UN Security Council resolutions by testing at least three short-range ballistic missiles.

Kim did not need to justify his defiant actions, however. Trump ignored the obvious flouting of UN rules. “My people think it could have been a violation,” Trump said. “I view it differently.”

Despite the missile launches—or maybe because of them—Trump stepped over the concrete curb marking the border between the two Koreas. By doing so, he handed the North Korean one of the biggest propaganda victories in the seven-decade history of his family’s regime. “One small step for a president, one giant leap for Pyongyang,” someone—inevitably—wrote.

How did Trump hand such a victory to Kim? The American president went to North Korea before Kim ever set foot in the United States. Trump’s visit, however short, supports Kim’s narrative that the North is “the strongest nation on earth.” After all, the president of America, Pyongyang propagandists will say, came to pay homage to the Kim ruler.

The news of the visit will bolster Kim’s rule and therefore undermine Trump’s announced goal of “denuclearizing” the regime.

So were Trump’s forty steps on Sunday a mistake?

They were almost certainly a mistake if Trump’s primary goal is to disarm North Korea. They were not, however, if Trump’s objective is not to take away Kim’s weapons but to take Kim away from Xi.

Trump’s over-the-top glorification of Kim—and his far-too-generous praise for Vladimir Putin—make sense if he is trying to isolate the People’s Republic of China. Trump, unlike his two immediate predecessors, has not empowered Beijing in his North Korean diplomacy.

China has only one formal military alliance—the one with North Korea. In many ways, the Chinese look at North Korea as a Chinese protectorate. Kim, in Xi’s eyes, is a vassal.

The vassals in North Korea find their Chinese overlords overbearing, and Kim is obviously looking for another source of support. Having two such sources and playing them off against each other is traditional Kim family diplomacy.

Kim will, for the foreseeable future, need China, but he may just have found someone who can also fill his coffers and does not treat him as a subordinate.

Many in America may find Kim too awful to be treated as a friend—count me in that large group—but Trump’s embrace of him could be effective, something just as cynical as anything Xi might do.

Whether Trump diplomacy is effective or not, we can be sure that in Beijing at the moment, Xi and his colleagues are not too happy with what is happening on the Korean Peninsula.