Turning up the Heat on North Korea 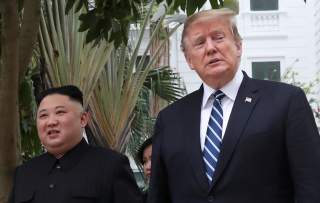 The inability of U.S. President Donald Trump and North Korea’s Supreme Leader Kim Jong-un to reach a denuclearization deal in Hanoi leaves the international community searching for a solution to the North Korean nuclear conundrum. The recent erosion of international efforts to enforce economic sanctions make efforts to persuade Pyongyang to give up its nuclear weapons through bargaining more challenging. A North Korean charm offensive and, perhaps, a desire among some to see this longstanding, seemingly intractable, problems disappear have led to diminished pressure on the North Korean regime. This changed context weakens the U.S. hand in negotiations and provides encouragement for Kim’s regime.

Going forward, the U.S. administration and its allies need a focused, concerted effort to strengthen the U.S. bargaining position vis-à-vis the North Koreans, including by complementing inducements with more forceful efforts to up the pressure on Pyongyang. There is a need to tighten sanctions enforcement globally, weakening Kim’s walk-away options in future talks. Any effort to do this will have a political dimension. U.S. policymakers and leaders must reinforce the political will that has dissipated in recent months and take concrete steps to collaborate on counter-proliferation activities on a wide international basis. It will require coordinated action across dozens of states and, within those states, hundreds of domestic agencies and departments.

This will be an uphill battle. Russia and China appear to have loosened sanctions enforcement following the June 2018 Singapore summit. According to a UN Panel of Experts Report, in 2018 North Korea was able to procure more than 500 000 barrels of refined petroleum products, as well as a panoply of luxury goods through elaborate ship-based transfers. Smaller countries, including odious regimes in Africa, have—according to MIT’s Observatory of Economic Complexity—provided Kim’s regime with hundreds of millions of dollars of precious foreign currency through illicit trade in recent years, capitalizing on a more permissive international environment.

Even among key U.S. allies, the consensus that has accompanied non-proliferation policies has been shaken, particularly as America pressures its partners to drop their support for the Iran nuclear deal. The trans-Atlantic divide on international security questions was on full and very public display during the 2019 Munich Security Conference, where U.S. Vice-President Mike Pence and German Chancellor Angela Merkel issued dueling statements. In fact, U.S. global leadership has not been so widely in question in more than seventy years.

The multidimensional quality of counter-proliferation activities complicate efforts to tighten the screws on North Korea. Concerted action demands much more than diplomatic agreement. It requires coordinated action among customs enforcement agencies, export control bureaus, police bodies, military organizations, nuclear safety and security authorities, and many other actors. Few international institutions have the scope necessary to facilitate coordinated action among such a diverse set of players across such a wide array of discrete spheres of institutional activity.

Missing so far in the debate is the beneficial role that the Proliferation Security Initiative (PSI) can play in the effort. This multinational activity was initiated in 2003 with strong U.S. leadership to halt the trafficking of Weapons of Mass Destruction (WMD) and related materials. Rather than using PSI to implement some form of an ill-conceived naval blockade of North Korea, as some have advocated, it should be used as a flexible vehicle for coordination and for reinforcing waning political will on sanctions enforcement. PSI has many appealing features that make it a strong candidate for increasing pressure on Pyongyang and other proliferators.

With 107 participating states, PSI is one of the broadest coalitions available for building support for global counter-proliferation efforts. Once criticized for being an example of U.S. “unilateralism” and of dubious international legitimacy and legality, PSI now enjoys broad support. It has eclipsed its once unhelpful association with the U.S.-led war in Iraq and associated intelligence failures. PSI now facilitates cooperation among countries in all the world’s regions, including among states hosting some of the busiest global ports (where illicit goods and components are trafficked). PSI’s Operational Experts Group (OEG), which serves a steering function within the Initiative and counts thirteen major European countries among its members. The OEG provides a useful vehicle for mending the tattered trans-Atlantic consensus on proliferation issues. Also, Russia’s participation in PSI increases the value of this forum.

Since its beginning, PSI has maintained an operational focus. It was intended to be, remembers one of its chief architects, “the real thing, not just chit-chat.” PSI plays host to thriving trans-governmental networks of national officials who facilitate counter-proliferation cooperation, including those charged with administering customs laws, export controls, military cooperation, intelligence collection, and efforts to combat proliferation finance. Many of these subject-matter experts engage on an ongoing basis in detailed discussions from national capitals and work together to build critical capabilities and practices among smaller participating states.

Finally, PSI’s light institutional footprint and flexible decision-making structures mean that it is capable of moving swiftly to mobilize international efforts and reinforce political will among participating states. PSI’s voluntary, non-binding character—allowing for coordinated actions by sub-sections of the institutional population—means that it is less likely that a few spoilers will prevent action or necessitate lowest-common-denominator agreements. Moreover, its informal structure makes it a favorite for those skeptical of big international bureaucracy. Indeed, a primary architect of PSI was then-Undersecretary of State for Arms Control and International Security and current U.S. National Security Advisor, John R. Bolton.

Its capacity to mobilize a broad cross-section of global actors, its technical underpinnings, and its flexible institutional set-up, make PSI an attractive forum for bringing pressure to bear on North Korea and strengthening America’s hand in future negotiations. To the extent that the coordinated use of existing national and international interdiction authorities can menace North Korea’s nefarious activities at sea, so much the better. Even when these activities do not target a particular state, they have ancillary benefits for efforts to combat other state and non-state proliferators.

Granted, a drawback of working through PSI is the absence of key global players, such as Brazil, China, India, and Indonesia. PSI, like many informal institutions, also faces challenges associated with agenda continuity and follow-up. These drawbacks can be limited by employing PSI as a complement to, rather than a replacement for, other multilateral forums. Indeed, use of PSI is consistent with activities underway within the United Nations context, including those of the 1540 committee, as well as multilateral export control regimes. These institutions include players that are not currently in the PSI fold. Meanwhile, the challenges concerning follow-through on commitments are being addressed through key modernization initiatives emerging from the 2017 OEG meeting in Singapore, such as the adoption of a “troika” mechanism to enhance agenda continuity and provide leadership.

While PSI has been a vital forum for counter-proliferation cooperation for over fifteen years and has not been silent on North Korean proliferation issues, several steps can be taken to add new impetus to PSI’s activities in the current international context.

Ensuring high-level engagement: While PSI was born as a U.S. presidential initiative and has benefitted from almost annual G7/G8 backing, it has lacked even ministerial-level participation in recent years. High-level participation would complement the strong trans-governmental base that has evolved at lower-levels and would help to mobilize political will among endorsing states. The next PSI Mid-Level Political Meeting could be designated a High-Level meeting and participation could be encouraged at the ministerial level. The United States and major European states should set the tone for the level of participation, ensuring that they are represented at the ministerial level.

Bolstering PSI Outreach Efforts: Though two countries have joined the PSI effort within the last year, continued outreach efforts are essential to widening participation in the Initiative. Expanding participation augments PSI’s practical impact and normative weight, both essential to increasing pressure on the North Korean regime and strengthening the U.S. hand in future bargaining. Targets of these efforts should include Brazil, China, India, and Indonesia.

Outreach efforts should extend to the world of digital diplomacy. While PSI’s informal set-up creates some obstacles to coordinating these types of activities, modern institutions must play in the online space. Currently, PSI’s website hosts limited information, and its Twitter account has gone dark. Finding a formula for PSI states to overcome challenges should be a key aim of future meetings.

Strengthening Critical Capabilities and Practices: Augmented counter-proliferation capacity building—and aiding smaller states in meeting their international obligations under numerous UN Security Council Resolutions—have been key elements of PSI cooperation since 2011. OEG countries should step up and better resource these efforts. While far from the public eye, this form of concrete cooperation is essential to increasing pressure on the Kim regime and on other potential proliferators.

Michael W. Manulak is an Assistant Professor of Diplomacy and Foreign Policy at the Norman Paterson School of International Affairs at Carleton University. He has published on international organizations and foreign policy analysis in multiple publications, including the Review of International Organizations, Policy Options, and The Washington Quarterly.