A U.S. Alliance with North Korea? 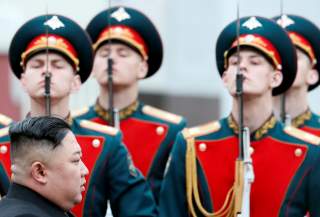 It’s not just the economy stupid.

Sure, North Korean leader Kim Jong-un has promised his people prosperity and sanctions are impeding his country’s economic growth.

But pundits who claim that Kim mainly wants sanctions relief are missing a larger point. And so is President Donald Trump when he holds out a vague vision of a brighter economic future for the North Korean people. Kim will not be bribed by a pot of gold at the end of a rainbow. Yet Trump, while asking Kim to “go bigger” and surrender not just his nuclear weapons but all his weapons of mass destruction first, is not even thinking of putting nearly enough sanctions relief on the negotiating table—never mind what Kim really wants.

To Kim, like his forebears, sanctions are the embodiment of U.S. enmity. As Kim made clear again in speeches on April 12, he seeks an end to that enmity and he needs to hear directly from Washington—not through Seoul—that America is willing to take steps to reconcile before he resumes talks.

Kim’s vision of reconciliation is far-reaching. North Koreans have long been telling their American interlocutors they want an alliance like the one the United States has with South Korea—even including a “nuclear umbrella.”

Secretary of State Michael Pompeo may have been reflecting what President Trump heard Kim say in Singapore when he told a Japanese interviewer on June 7, 2018, “We want to achieve a fundamentally different strategic relationship between our two countries.” Yet the administration has yet to put anything like that on the negotiating table. Nor has Pyongyang been willing to discuss in detail all the steps to complete denuclearization. Until the two sides do so, no comprehensive roadmap is possible.

Why does North Korea want the United States as an ally? In a word, China. Pyongyang has never trusted its next-door neighbor and now, more than ever, Kim wants to hedge against Beijing’s growing power.

Hanoi was a logical locale to underscore this aim in view of Vietnam’s fraught history with China and its postwar reconciliation with the United States. “The success of the Vietnamese economy is due to its decision to normalize relations with the United States in 1995,” Major General Le Van Cuong, former director of the Institute of Strategic Studies at the Vietnamese Ministry of Public Security, told the New York Times. “I would say to our North Korean friends that as long as they have a conflict with the United States, they will not be able to develop their economy properly,” General Cuong said. “China will try every possible tactic to keep North Korea in its arms because it wants a country to control.” He concluded, “Luckily, North Korea has the necessary conditions to escape China’s grip if it deepens its relationship with America.”

What better way for Pyongyang to assure its security without nuclear weapons than to ally with Washington?

An alliance does have its downsides, however. It is unlikely to gain a favorable reception in Congress, which would have to approve that arrangement. Such a fundamental improvement in relations would mean living with an autocratic and brutal regime.

And what of South Korea? The North Koreans have said the United States can have two allies at once. Conservatives in Seoul are unlikely to regard that prospect with equanimity. Nor will Japanese Prime Minister Shinzo Abe, who until recently opposed negotiations by anyone with North Korea.

A reversal of alliances by North Korea, especially if U.S. troops remain as guarantor on the Korean peninsula, would alter the balance of power in Northeast Asia, which is likely to arouse suspicion, if not outright antagonism in Beijing. That would not enhance security for anyone in the region.

A better way to accommodate their security concerns might be a comprehensive security approach that would involve all the region’s actors in parallel negotiations leading ultimately to a security partnership with the United States:

It will take time and patience to convince Pyongyang that Washington is committed to such a fundamental change in their relationship. That will not happen in a year or two. In the meantime, the two sides can each commit to confidence-building measures that move denuclearization and reconciliation part of the way forward.

Skeptics are certain that the North will never give up its nuclear weapons, alliance or no alliance. How does anyone know for sure? The only way to find out is to sustain negotiations and test whether progress toward denuclearization can be made through mutual confidence-building. By contrast, going for broke is a sure way for the Trump administration to end up bankrupt.