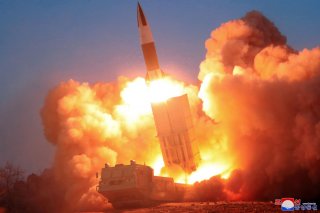 Following North Korea’s cruise missile launch earlier this week, the U.S. government, in particular, appeared to downplay the severity of what happened. President Joe Biden told reporters earlier this week that “according to the Defense Department, it’s business as usual,” and even laughed when he was asked if the launch would affect diplomacy.

Then, later in the week, North Korea carried out another missile launch.

North Korea launched a pair of short-range ballistic missiles on Thursday, a considerable escalation from the first launch. Such a launch would, unlike the first one, be considered a violation of sanctions against North Korea.

Japanese prime minister Yoshihide Suga proclaimed that the launch threatened “peace and safety in Japan and the region,” while South Korean foreign minister Chung Eui-yong expressed  “deep concern,” according to The Washington Post.

The South Korean government stated that “the two short-range missiles were fired at 7:06 a.m. and 7:25 a.m. from an area on the North’s eastern coast and flew 450 kilometers (279 miles) on an apogee of 60 kilometers (37 miles) before landing in the sea,” according to The Washington Post.

“This activity highlights the threat that North Korea’s illicit weapons program poses to its neighbors and the international community,” U.S. Indo-Pacific Command spokesperson Capt. Mike Kafka said, per the newspaper.

The missile tests follow the visit to the region last week by Secretary of State Tony Blinken and Secretary of Defense Lloyd Austin, where they met with their counterparts from Japan and South Korea and are thought to have discussed the North Korean nuclear issue extensively. The United States and South Korea also performed joint military exercises at the same time, the type of exercises that have long been viewed as a provocation by North Korea.

CNN had reported, during the meetings in Asia, that there were indications such a missile test was in the works by the North Koreans.

North Korea has typically launched missile tests or other provocations whenever a new president takes over in the United States or South Korea. In 2017, shortly after President Trump assumed office, the Kim regime launched nuclear and intercontinental missile tests, which led to escalating rhetoric that eventually gave way to a diplomatic process.

Reports prior to the Asia trip had stated that North Korea was being unresponsive to American diplomatic overtures.

Biden is expected to soon announce his administration’s strategy in regard to dealing with North Korea, which is expected to differ from that of his predecessor. Biden is scheduled to hold his first news conference as president on Thursday, and North Korea is likely to come up.