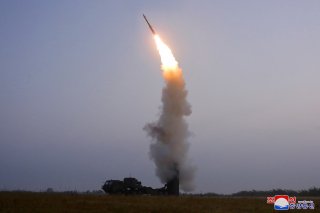 Another week has meant another missile launch by North Korea, which has occasioned a response by the United States

North Korea reportedly fired a submarine-launched ballistic missile into the East Sea, per Yonhap News Agency. The U.S. Indo-Pacific Command (INDOPACOM) in Hawaii had said that it was “aware” of the launch.

The launch is the eighth by North Korea this year.

South Korea had commented first on the launch, which precedes the planned talks this week among the  United States, South Korea, and Japan. Representatives of all three nations are scheduled to meet this week in Seoul.

“Our military is closely monitoring the situation and maintaining readiness posture in close cooperation with the United States, to prepare for possible additional launches,” the South Korean joint chiefs of staff said, per the Guardian.

"The United States condemns the DPRK's (Democratic People's Republic of Korea's) ballistic missile launch. These launches are a violation of multiple United Nations Security Council resolutions and are a threat to the region,” a State Department spokesperson told Yonhap.

"We call on the DPRK to refrain from further provocations and engage in sustained and substantive dialogue. Our commitment to the defense of the Republic of Korea and Japan remains ironclad.”

The National Security Council (NSC), meanwhile, issued its own statement in response to the launch, per Yonhap.

Earlier this month, North Korea had claimed that it had launched a hypersonic missile, although experts argued that the missile didn't actually travel fast enough to be meet the definition of hypersonic.

The United States, per CNN, said that “while we have assessed that this event does not pose an immediate threat to U.S. personnel or territory, or to our allies, the missile launch highlights the destabilizing impact of (North Korea's) illicit weapons program.”

This week, initial reports by the Financial Times claimed that China had successfully launched a nuclear-capable hypersonic missile back in August. However, China denied the report, stating that the launch had actually been a “routine spacecraft experiment to verify the reusable technology of spacecraft.”

Several countries, including the United States, China, Russia, and North Korea, are known to be working on hypersonic missiles and other hypersonic weapons.

Per Defense News, back in September, the U.S. Army completed delivery of the first hypersonic weapon capability. It was delivered to the I Corps’ 5th Battalion, 3rd Field Artillery Regiment, 17th Field Artillery Brigade, beginning in March, with the delivery complete in late September.