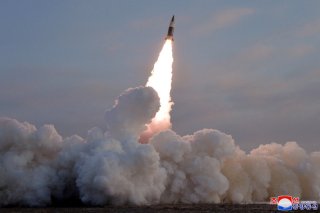 North Korea has launched two more missiles, once again drawing condemnation from the United States and other countries. That brings the total of launches by the North Korean regime since the start of the year to six.

The United States, however, says that it remains committed to restarting the diplomatic process with North Korea, which has been largely dormant since the Trump administration’s opening between 2017 and 2019.

Following this week’s launch, the Associated Press reported that experts believe the tests represent an attempt to pressure the Biden administration to begin negotiating sanctions relief with North Korea. In addition, per the AP, the South Korean government believes that the weapons in the Thursday launch were short-range, and were fired from the east coast of North Korea before landing at sea.

The New York Times wrote this week about the Biden administration’s hopes to avoid a crisis with North Korea. It noted that the United States reacted to this year’s first launches with calls for more UN sanctions, but that the Kim regime appears “unfazed” by such threats.

“This is a deeply isolated, autarkic economy,” John Delury, a professor of history at Yonsei University in Seoul, told the Times. “No amount of sanctions could create the pressures that Covid created in the last two years. Yet, do we see North Korea begging and saying, ‘Take our weapons and give us some aid?’ The North Koreans will eat grass.”

One scientist told the Times that North Korea is believed to currently possess the nuclear material for about forty-five warheads, a number that was closer to twenty when the Obama administration left office five years ago.

The North Korean regime has hinted recently that it will end its self-imposed moratorium on nuclear testing and intercontinental ballistic missiles (ICBMs), which have both been in place since 2017. The Korean Central News Agency (KCNA), North Korea’s state-owned news agency, had said that a recent Worker’s Party meeting was said to prepare for a “long-term confrontation” with the United States.

This was in retaliation for such “hostile” actions as military exercises between the United States. and South Korea. That same Yonhap report also suggested that North Korea may soon hold a military parade, although it’s not clear how the timing of that would work.