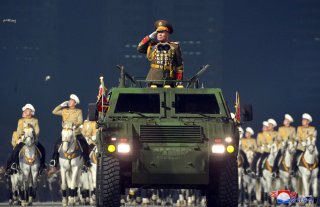 “The Kim Jong-un regime has achieved alarming success in its quest to demonstrate the capability to threaten the U.S. homeland with nuclear-armed ICBMs, believing such weapons are necessary to deter U.S. military action and ensure his regime’s survival,” the four-star general said in a statement Tuesday submitted to the Senate Armed Services Committee.

“In 2017, North Korea successfully tested a thermonuclear device—increasing the destructive potential of their strategic weapons by an order of magnitude—as well as three ICBMs capable of ranging the United States,” he added.

The isolated East Asian nation conducted its sixth and final nuclear test in late 2017 and has since maintained a self-imposed moratorium on nuclear and long-range missile testing.

VanHerck, however, noted that North Korea has already declared that it is “no longer bound” by such restrictions.

“The North Korean regime has also indicated that it is no longer bound by the unilateral nuclear and ICBM testing moratorium announced in 2018, suggesting that Kim Jong-un may begin flight testing an improved ICBM design in the near future,” he said.

“Despite U.S. efforts in 2020 to reach an agreement with Kim Jong-un, North Korea continued its development of ICBMs capable of striking targets in the United States. As North Korea continues its pursuit of advanced long-range strategic weapons including the new systems displayed during their 10 October 2020 parade—USNORTHCOM remains committed to maximizing the capability and capacity of our ballistic missile defense systems.”

The general’s statements are highly consistent with the views of Adm. Phil Davidson, the commander of U.S. Indo-Pacific Command.

Last week, the four-star admiral declared that the United States and its allies in the Pacific should be on guard as North Korea poses a “serious” and “immediate” threat, adding that the country over the years has continued to develop its nuclear and delivery systems that are designed to strike the United States.

“North Korea poses a significant security risk to the United States and our partners in the Indo Pacific Region. The country has taken no meaningful steps toward denuclearization, despite promising signs of de-escalation in 2018, and it continues to advance its strategic weapons program,” Davidson said in a statement submitted to the Senate Armed Services Committee.

“Until the nuclear situation is resolved on the Korean Peninsula, North Korea will remain our most immediate threat.”

He noted that Kim’s regime also has taken on an increasingly “bellicose” stance toward the United States.

“In early 2021 he characterized the United States as the North’s biggest or principal enemy as he vowed to strengthen its nuclear arsenal. Kim also identified several new weapon modernization goals in early 2021, to include developing tactical nuclear weapons and hypersonic glide vehicles and improving the readiness and accuracy of North Korea’s ICBMs,” Davidson said.

“Pyongyang’s missile research and development efforts, coupled with its ongoing pursuit of nuclear material and technology, are consistent with the regime’s stated objective of being able to strike the U.S. homeland,” he added.