A U.S.-North Korea Showdown in 2020 Can Be Avoided 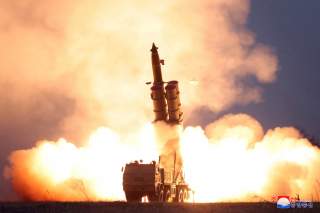 Another day, another round of missile tests from the North Koreans.

On November 28, on the same day Americans were sitting down for their turkey dinners, Pyongyang launched two projectiles from what its state media referred to as a super-large multiple rocket launcher. The test came days after North Korean leader Kim Jong-un visited front-line units conducting an artillery drill near the disputed inter-Korean maritime border, an exercise that came roughly nine years after Kim’s father, Kim Jong-il, ordered the shelling of Yeonpyeong island, killing four South Koreans.

Since last May, two months after President Donald Trump and Kim walked away from a high-stakes summit in Hanoi, Vietnam without a nuclear agreement, North Korea’s missile testing schedule has been on a tear. This year has been Pyongyang’s most active on the missile front since 2017, a time when Trump and Kim were faking fun of each other about their lack of intelligence (remember “dotard?”) and one-upping one another about the size of their nuclear buttons. The question increasingly on everybody’s mind is whether  2020 will turn out like 2017 (when it felt like war was in the air) or like 2018, when the sea started parting ways to make room for a diplomatic channel?

We don’t know the answer, as of yet. But if the situation doesn’t start turning around (and soon), we could be waking up on New Year’s Day with a hangover and a “fire and fury” migraine parsing through our heads. Stanford University’s Robert Carlin said it best to the New York Times: “Today, we sit on top of a live volcano.  We don’t have a lot of time to back away.”

As the new year approaches, priority number one for both Washington and Pyongyang is to do everything possible to avert the “new way” Kim has been mysteriously telegraphing since the spring. Forget about striking a denuclearization deal this year—it’s not going to happen. Instead, begin concentrating on preserving what little oxygen remains for diplomacy.

For Kim, this means understanding the severe limitations now engulfing his dialogue partner. The North Korean leader would be an utter fool if he persisted with the hope that Trump will sign off on broad-based, comprehensive sanctions relief. With Trump only weeks away from being only the third president in U.S. history to be impeached, Kim’s pen-pal is narrowly circumscribed in what he can do at the negotiating table. Who knows; on his own, Trump may very well prefer to pull every last U.S. servicemember from South Korea, sign a peace treaty with the North, and buy Kim a first-class ticket for a state dinner at the White House. But with impeachment swirling around Washington, D.C. like a swarm of angry birds, Trump will in no way sacrifice his political capital on giving Kim what he wants.

Politics will be elevated over policy for the foreseeable future. The president desperately needs the Republican Party to save him from a Senate conviction. He will try to do everything he can to maintain that support. Agreeing to a flimsy deal with the North will not help his cause. Senate Republicans may be willing to swallow Trump’s meetings with Kim, but they most certainly will not provide the president with political cover for an agreement that is less than perfect—even if perfect is and has always been impossible.

Kim, therefore, will need to tone the rhetoric down. He is more than free to express his frustrations with the pace of negotiations and threaten another way if the Trump administration doesn’t move to the middle. But the “portly pariah” will do himself no favors by continuing to demand the moon, the stars, and everything in between; with the pressure Trump is under, those hardline demands may very well push the thin-skinned president in the opposite direction. Kim will need to aim far lower if negotiations have any chance of surviving.

Trump, too, must play his part. He can keep up the letter writing to Kim; indeed, leader-to-leader correspondence could be a godsend at a time when actual negotiating is painfully slow or absent. But Trump needs to quit freelancing. If the president wants a deal, he needs to bring Secretary of State Mike Pompeo, National Security Adviser Robert O’Brien, special envoy Stephen Biegun, and everybody else working on the file into the same room and clearly express to all of them what he expects from the North Koreans and what they can give up to meet his goal. Just as importantly, Trump needs to let loose of the reigns and allow his negotiators to actually negotiate. If the process suffers from gridlock, Trump can always contact Kim again and jump-start the engine.

Trump and Kim appear to share some affection for each other. But positive vibes between the top leaders don’t help much when their deputies and subordinates are operating on another plane. Biegun is barely speaking with Kim Myong Gil, his North Korean counterpart—doubly so since the last round of working-level talks in Stockholm concluded abruptly after one day.  Pompeo is persona non-grata in Pyongyang. The North Korean Foreign Ministry and State Commission are churning out over-the-top insults at U.S. officials. And back in Washington, pretty much everyone except Trump (and maybe Biegun) take one look at the North Korean delegation and see a bunch of conniving snakes who would rather starve millions of their own people than relinquish their nuclear arsenal.

Such an environment makes it practically impossible for a successful negotiation to result in anything, let alone the idea of denuclearization.  The lack of trust is palpable, and it’s why proposing a grand bargain or trying to do too many things at too quick a pace will kill the entire affair.

Nobody wants to go back in time and return to the scary days of “fire and fury.” The juvenile behavior would have been amusing if it weren’t for the fact that barbs between nations with bad history and inconsistent communication can often heighten miscalculation.

But if Trump and Kim wish to enter the New Year without an incident, both need to do some serious introspection about what is achievable and what is best left for another time. Managing expectations and alleviating mistrust may not be as exciting as holding a signing ceremony, but it just may be enough power to allow diplomacy to live past the winter.