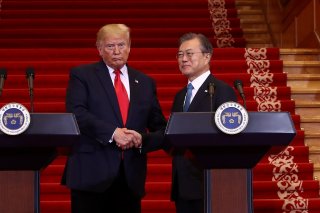 Contrary to recent South Korean media reports, negotiations seeking a military cost-sharing agreement between Washington and Seoul remain deadlocked. The festering dispute risks straining the important U.S.–South Korean alliance and sets a negative precedent for similar negotiations with Japan later this year. At the heart of the dispute is President Trump’s demand for an exorbitant increase in allied contributions for the cost of stationing U.S. forces overseas.

Since 1991, a bilateral Special Measures Agreement has offset the non-personnel costs of stationing U.S. forces in South Korea and has been renegotiated every five years. During renegotiations in 2018, President Trump demanded South Korea pay “cost plus 50 percent.” Seoul refused. The two sides eventually agreed to an incremental increase in South Korea’s contribution, but with the agreement to be renegotiated yearly.

For years, Washington consistently said that the annual cost of stationing U.S. forces in South Korea is approximately $1.5 billion. As a result of the February 2019 agreement, South Korea pays $920 million annually. Trump is now demanding that South Korea pay a five-fold increase of $5 billion dollars. That would be more than a tenth of South Korea’s entire annual defense budget of $42 billion.

Not counted in Seoul’s contribution is land provided for U.S. bases at no cost and tax-free. South Korea estimates the land-use donation as being worth 60 percent to 70 percent of the non-personnel costs of stationing U.S. forces in South Korea. Also excluded is South Korea’s 93 percent funding of the $10.7 billion cost of building Camp Humphreys, the largest American military base outside the continental United States. Seoul also notes that, over the last four years, it has purchased $13 billion in arms from the United States.

In early April, Jeong Eun-bo, South Korea’s negotiator for the defense cost-sharing talks, announced his expectations that the talks would be “finalized in a near future.” The presidential Blue House hinted that an announcement of success would be made the next day. The South Korean government may have made the announcements to offset the negative public impact of U.S. Forces Korea announcing it had furloughed 4,000 South Korean employees due to the failure to resolve the impasse.

The furlough has raised concerns about degradation to military readiness, already impacted by the cancellation of numerous allied military exercises and the lockdowns imposed in response to the COVID pandemic. General Robert Abrams, commander of U.S. Forces Korea, has commented: “On the life, health, safety and minimum readiness, we’ll be OK in the short-term. [But] I’ll be watching closely the impact on readiness and our ability to deliver services at an acceptable level.”

Despite April’s rosy predictions, it quickly became clear that the two sides remained far apart, with no resolution in sight. The U.S. Department of State affirmed President Trump’s “expectation that our allies around the world, including South Korea, can and should contribute more.” Trump has long criticized U.S. allies, including South Korea, for contributing too little to the cost of U.S. forces overseas. During the 2016 presidential campaign, he vowed: “If we have to walk, we have to walk.”

Once in the Oval Office, Trump continued to complain of the costs of U.S. forces in South Korea. In May 2018, he ordered the Pentagon to prepare options for drawing down American troops there. Congress became so concerned that it added language to the National Defense Authorization Act to prevent a drawdown of U.S. forces from South Korea.

The Trump administration should drop its unrealistic demands for massive increases in funding and shift instead to more reasonable, incremental increases. A continued stalemate in the negotiations and perceptions of excessive U.S. pressure could lead to a resurgence of the anti-Americanism prevalent during previous progressive South Korean administrations. It could also lead to a premature reduction in U.S. forces. Force reductions should be contingent on—and reflective of—reductions in the North Korean threat to our allies, troops and civilians.

Excessive monetary demands degrade alliances based on shared principles and goals into mere transactional relationships. Seeking to profit off U.S. forces overseas is inconsistent with American values and commitments. Alliances are not valued in dollars and cents, and America’s brave sons and daughters in uniform are not mercenaries.

Alliances are not transactional relationships. Rather, they are based on shared values and goals. They are the sword that deters aggressors and the shield of security and stability that allows countries under that shield to flourish. The U.S.–South Korean alliance was forged in blood during the crucible of the Korean War. Its enduring motto is katchi kapshida (“we go together”), not “we go together, if we are paid enough.”

Bruce Klingner is Senior Research Fellow for Northeast Asia at the Heritage Foundation. He previously served 20 years with the CIA and Defense Intelligence Agency, including as CIA’s Deputy Division Chief for Korea.