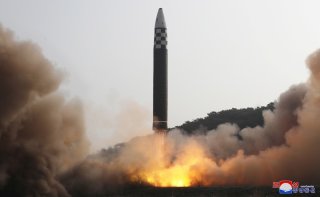 On Thursday, North Korean leader Kim Jong-un threatened to use nuclear weapons, in the event of any confrontation with the U.S.

“Our armed forces are completely prepared to respond to any crisis, and our country’s nuclear war deterrent is also ready to mobilize its absolute power dutifully, exactly, and swiftly in accordance with its mission,” Kim said, per NPR, which cited the state-run Korean Central News Agency.

“Talking about military action against our nation, which possesses absolute weapons that they fear the most, is preposterous and is very dangerous suicidal action,” Kim added. “Such a dangerous attempt will be immediately punished by our powerful strength and the Yoon Suk Yeol government and his military will be annihilated.”

In response, the United States and South Korea announced that they will expand a planned upcoming joint military exercise, and they will “restart their strategic dialogue on extended deterrence.” The agreement was reached between South Korean defense minister Lee Jong-sup and U.S. secretary of defense Lloyd Austin.

The Defense Department released some photographs and a report about the meeting between the two defense ministers.

Austin had reiterated once again that the U.S. commitment to defend South Korea was “ironclad.”

“North Korea remains the greatest threat to peace and stability on the peninsula, but the alliance between the United States and South Korea continues to grow. South Korea is a positive, democratic ally that is a force for peace and the international order that has fostered that peace,” the Defense Department said.

“Our alliance remains resolute and ready in the face of these dangerous and destabilizing actions,” Austin was quoted as saying. “President Biden affirms the U.S. extended deterrence to commitment to the ROK the using the full range of defense capabilities, including nuclear, conventional, and missile defense capabilities.”

As for the other crisis in North Korea, the nation reported no new “fever” cases in the twenty-four-hour period ended July 30, following a massive coronavirus outbreak earlier this summer. However, per Fox News, “there have been widespread outside doubts about the accuracy of North Korean statistics as its reported fatalities are too low and its daily fever cases have been plummeting too fast recently.”

CNN reported in early July that North Korea may have been hiding a “bigger problem” beyond the outbreak, such as the possibility of a new variant.

“As with past outbreaks of disease in North Korea, one of the biggest concerns surrounding the country’s Covid outbreak is that Pyongyang’s penchant for secrecy makes it hard to accurately gauge its severity,” the CNN report said.

“International NGOs and most foreign embassies have long vacated the country and tightly sealed borders mean access is impossible.”