Wanted: A Peace Plan for North Korea That Works 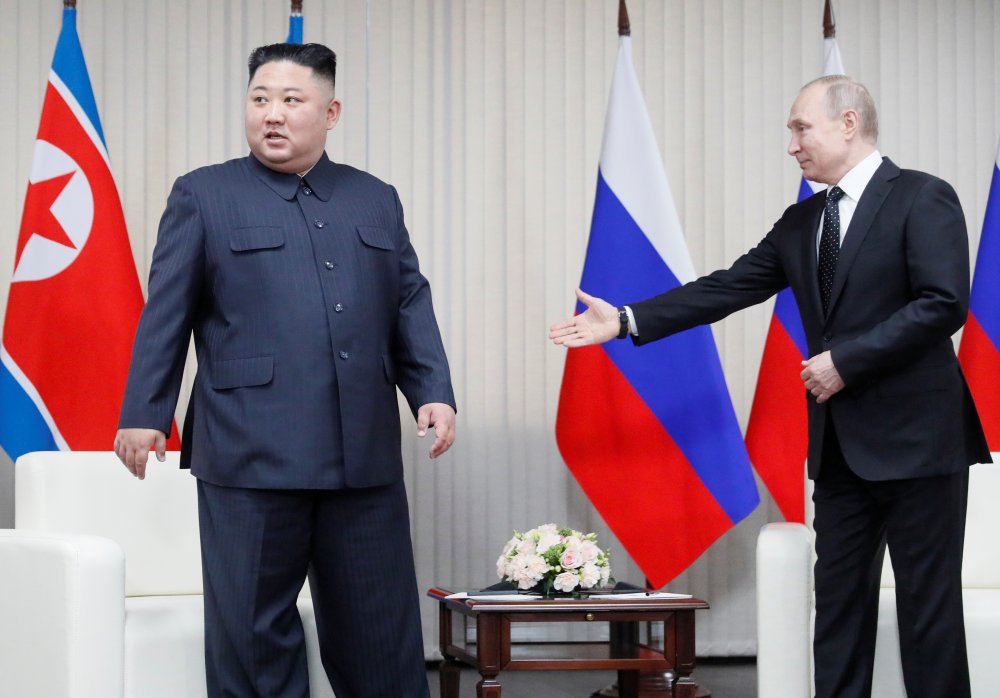 Russian president Vladimir Putin is a lot of things. He’s a conniving ex-spy who goes to bed dreaming of Russia reclaiming its former Soviet glory. He’s unforgiving and merciless toward fellow Russians who switch sides and sell out to the West. And he’s incapable of admitting any mistakes. Marco Rubio has called him a “thug.” Hillary Clinton referred to him as a bully.

This may all be true. But those negative attributes notwithstanding, Putin may be right about one thing: on North Korea, swinging for the fences will lead to a three-pitch strikeout.

Putin’s first face-to-face meeting with Kim in Vladivostok last week was a non-event as many North Korea experts anticipated. As Kim was heading to eastern Russia on his bullet train, Kookman University’s Andrei Lankov predicted that the Putin-Kim summit would be more showmanship than actual substance. While Kim Jong-un would be seeking opportunities to chip away at the UN Security Council sanctions regime by asking Putin to allow some North Korean laborers to remain on Russian soil after the end of the year, Moscow was not liquid enough to offer much cash assistance to the North. Low and behold, Kim and Putin went their separate ways after a few hours with no significant understandings—let alone a signed agreement or letter of intent. Putin can call his summit with the young North Korean dictator a success all he wants; the reality is that denuclearization talks are as stuck today as they were before the meetings in Vladivostok happened.

The Russian president, however, did contribute something positive to the overall discussion. During his press conference on April 25, Putin commented how denuclearization was still possible if the United States evolved its diplomatic approach from the Boltonite “big deal” demand to a more incremental, give-and-take process. Denuclearization, according to Putin, is still on the table "if we move forward gradually and if we respect each other’s interests, if we move ahead carefully.” The fact this obvious platitude had to be given as a helpful reminder to U.S. officials thousands of miles away is an indictment on the diplomatic strategy the Trump administration has chosen thus far.

We shouldn’t give Vladimir Putin too much credit in making this observation. For one, Putin has his own reasons for asserting Russia into the denuclearization negotiations. The Russians have lost a considerable amount of influence and clout on Korean Peninsula affairs since the Soviet Union’s walls came tumbling down in the early 1990s. Pyongyang is far more dependent on China than it will ever be on Russia economically and politically. It took Kim Jong-un nearly eight years in power before he even set foot on Russian soil, a radical contrast to the Cold War days when Kim Il-sung looked to Moscow as his regime’s primary benefactor. For Putin, getting Russia back into the Korea game is good domestic politics and good geopolitics. Why cede all of the space to the Americans?

Yet none of this should discount Putin’s broader point about going slow. Although incrementalism is time-consuming and less sexy than the exciting, groundbreaking big deal Donald Trump is so attracted to, it is also happens to be the only way diplomacy between Washington and Pyongyang will result in anything worthwhile. President Trump should have learned this already from personal experience. Two months ago, in Hanoi, Trump presented Kim with a ridiculous all-for-all proposal that would have required the North Koreans to hand over their nuclear, chemical, biological, and missile programs to the United States on a silver platter in exchange for promises of better diplomatic relations and economic sanctions relief. You don’t have to have a doctorate in Korean history to recognize that an ultimatum such as the one Trump reportedly gave to Kim would be swiftly rejected. There is no incentive for Kim Jong-un to even sleep on Trump’s offer. Indeed, given nearly seventy years of adversarial relations with the United States, the North Korean leader would have been downright crazy to seriously consider the proposal. Libyan dictator Muammar el-Qaddafi made that error in judgment when he allowed U.S. and British negotiators to transport his crude nuclear program to Oak Ridge, Tennessee, for destruction; more than seven years later, Qaddafi was dragged out of a storm drain, sodomized by the rebels seeking to oust his regime, and executed shortly thereafter.

If Trump’s words are any guide, then it appears as if the administration isn’t interested in fine-tuning its strategy. The president remains supremely confident in his negotiating abilities, believing that he can heap praises on Kim and butter up to do something that is simply not in Pyongyang's interest to do: disarm its nuclear arsenal, its other weapons of mass destruction, and the ballistic missiles that go with it. Assuming that this is the game-plan, a third Trump-Kim summit would be a waste of time.

Putin is a U.S. competitor on more issues than not, but on the subject of North Korea, Washington and Moscow share a similar objective. Both countries want a Korean Peninsula at peace and integrated with the rest of the region—and a Kim regime that is perhaps a little less nuclearized. As distasteful as it is to take the advice of a man who fancies himself a twenty-first century Russian monarch, Putin’s recommendation is not that dissimilar to what Korea analysts in the United States, South Korea, and Europe have been advocating for well over a year: only when a degree of trust is built over time will Kim Jong-un begin to contemplate a different future for his country.

Why this is so difficult for others to understand is downright bewildering.