What China Wants From North Korea 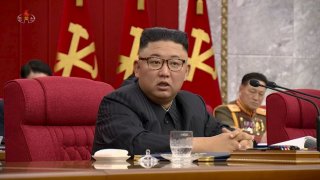 What does China want when it comes to North Korea? In a nutshell, for the last two or three decades, Beijing has consistently pursued three major goals which are of different value and hence form a clear hierarchy.

First, China needs a stable North Korea. It creates an important buffer zone next to China’s major urban and industrial centers. China does not want instability and chaos in a neighboring country – more so since this country has large stockpiles of weapons of mass destruction (WMD). Now, with the Sino-U.S. confrontation, the value of North Korea as a buffer zone has increased even further.

Second, China needs a divided Korean Peninsula. Given the current state of affairs, unification of Korea nowadays is conceivable only as a Seoul-led and Seoul-dominated unification, essentially, as a conquest of the impoverished North by the affluent South. China does not want to deal with an enlarged version of South Korea on its north-eastern border. Such a country will remain the US ally and might even station U.S. troops on its land. It might exercise unwelcomed influence on the ethnic Korean minority near the border, and in general, be less than cooperative with China.

Third, China would prefer to see a non-nuclear Korea. Beijing does not welcome North Korea’s nuclear adventurism, not least because it creates a dangerous precedent. China understands: if the proliferation regime collapses, some East Asian countries might go nuclear, and their deterrence force will be directed against China.

Unfortunately, in our less-than-perfect world, policy is not a choice between good and bad, but rather a choice between bad and worse. So, from the Chinese point of view, threats created by a stable and sovereign but nuclear North Korea are real, but still less grave than threats likely to be created by either unstable North Korea or Korea being unified under Seoul’s stewardship.

China has no reason to actively participate in a tough sanctions regime. Such a regime is not very likely to bring denuclearization: even if the economy fully collapses and another million North Korean farmers starve to death, Pyongyang will not change its course. The North Korean leaders will never surrender their nuclear weapons, which they perceive as the only guarantee of their survival. However, if the sanctions provoke a great deal of economic hardships, the result might be some pretty serious disturbances in the North, and this is the last thing China wants.

Thus, the rational choice for China is to keep North Korea afloat by providing it with some aid – not too much, since China is not happy about subsidizing the nuclear program, but enough to make sure that every commoner has his or her bowl of corn gruel, and every secret police agent eats pork daily. It ensures stability, and this is what China wants – especially now when the strategic value of keeping North Korea afloat has increased due to the confrontation with the United States.

There is a good side to the story, too. The uncharacteristic quietness of the North Koreans who did not even greet a new U.S. administration with a nuclear test might be a result of Chinese pressure. Beijing does not want North Koreans to be provocative, since their noisy gestures create a good pretext for U.S. presence in the region and pushes Japan and South Korea closer to the United States. China is not stopping North Korea from working on the nukes and ICBMs but stopping it from being too noisy about its exploits.

Can China be persuaded to reconsider this approach? Perhaps, but only if rewards are really high. One can imagine a package U.S.-China deal that will include North Korea, but this deal has to be really big and comprehensive. And, at any rate, it is almost certain that the deal will be about certain limits being imposed on North Korea’s nuclear program, not about this program being discarded in whole or in large part.

For the time being, however, we should reconcile ourselves with the idea that China will be quietly sabotaging sanctions, and, while talking much about the grave need for a negotiated solution, will not be in a hurry to forge some mutually acceptable deal.

Andrei Lankov is a Professor at Kookmin University, Seoul.