What Does 2020 Hold In Store for the North Korea Nuclear Issue? 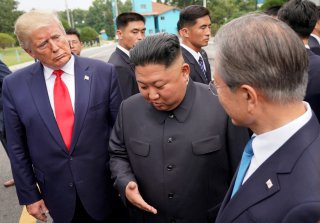 It seems that the coronavirus global outbreak has significantly overshadowed North Korea issue almost in the first half of 2020. But the Pyongyang conundrum never disappeared from the world’s purview. CNN’s appalling report on Kim Jong-un’s death in April via a failed surgical operation shocked the world. Kim Jong-un’s disappearing from media coverage lasted until early May. Otherwise, his sudden death would surely have caused a big stir in East Asia.

Now that the myth of Kim Jong-un’s death has been debunked, there remains one more uncertainty which is still hovering over the most reclusive country—what damage has the coronavirus pandemic done to it. Despite Pyongyang’s repeated denial that it has had a single coronavirus case in the country, it is broadly rumored that Kim’s disappearing largely stemmed from his attempt to hide from the coronavirus. Additionally, North Korea’s economic predicament is no doubt ratcheting up, and getting worse—particularly due to the fact that China’s northeastern region has been declared a new high-risk area for the epidemic. Since the area is close to North Korea, the border trade there has ceased, which has deepened the country’s economic shortage.

With domestic stress increasing, what might North Korea resort to do for food security, income and to move toward removing international sanctions? Beijing and Russia might offer Pyongyang humanitarian aid as they have done in the past but they will never embrace Kim Jong-un. At best, North Korea could expect food. South Korean president Moon Jae-in vowed to push toward additional inter-Korea relations progress after Seoul’s ruling party had a landslide victory in the Korean parliamentary election on April 15. However, Seoul has a big restriction regarding the reopening of inter-Korea economic and business cooperation. Unless North Korea takes a step forward to substantiate its denuclearization pledge shrined in the Panmunjom Declaration, there will be little to no progress. No one believes that Pyongyang would bow to Seoul and accept its offer to denuclearization. After all, Kim Jong-un’s nuclear weapon is one of the rare things that display his country’s strength.

Obviously, Kim Jong-un has little choice but to agree to resume the North Korea-U.S. dialogue. However, it is another big dilemma his country is facing. The Trump administration has unequivocally proclaimed that it will not lift international sanctions unless North Korea can layout a substantive denuclearization process. Trump once believed his personal charm could eventually persuade Kim Jong-un of taking for granted a deal of nuclear dismantlement for economic assistance. But Trump failed. Additionally, there is little probability that Washington would step down from its clearly announced conditions to sanction lifting and economic aids.

Nevertheless Kim Jong-un might assume that Pyongyang still has some negotiating chips to force Washington and Seoul to retreat—perhaps the resumption of nuclear and long-range missile tests. North Korea’s nuclear test would likely suffer from new sanctions by UN Security Council and even at the cost of China’s pull-off of food aids. Therefore, I don’t think it would be possible for Pyongyang to reconsider exploding one more under-earth nuclear device. But it’s quite likely that North Korea would launch long-range missile tests in some moment of the rest of 2020. To do that, North Korea might try two things. It could either create new tensions to direct the attention of the pandemic-ravaged world towards its demands or sniff at Trump’s North Korea policy and its steadfast but “unworkable” parameters for Pyongyang. In the end, what North Korea desperately wants is to re-perform the 2007–2008 nuclear disablement episode and dismantle a cooling tower in exchange for the resumption of economic assistance and partial lifting of international sanctions. This is North Korea’s preference—gradualism of denuclearization and trading for its economic and international success without complete nuclear disarmament. Even then, North Korea might not get anything in return. Obviously, Trump has no interest in enforcing denuclearization to score for his foreign policy. Now, Washington seems fully determined to focus on fighting with China rather than floating its diplomatic achievement with North Korea.

Zhu Feng is the executive director of Collaborative Studies of the South China Sea and the director of the Institute of International Studies at Nanjing University in China.