What Happens if Kim Jong-un Dies? 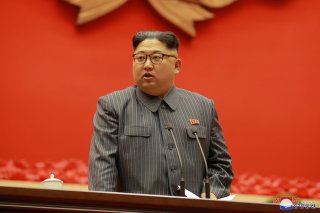 North Korean leader Kim Jong-un’s health is a topic of much interest for both lay-people as well as for analysts of political and security developments on the Korean Peninsula. More than simple tabloid journalism, any news of the Supreme Leader’s health attracts such interest because Kim Jong-un is the leader of a country armed with nuclear weapons, where any instability could bring with it a major security challenge.

Most notably is the dynastic nature of the North Korean leadership. Three successive generations of the Kim family have now led North Korea, and it is almost certain that a continuation of this trend remains the plan for the future. As such, another member of the Kim dynasty will most assuredly be tapped to lead the country in the absence of its current ruler.

There are, however, a limited number of candidates to draw from. Kim Jong-un has already whittled down the ranks of his own family since coming to power in 2011, having purged his uncle Jang Song-thaek in 2013 and ordering the assassination of his half-brother Kim Jong-nam in 2017. Kim Jong-un has a surviving brother in the form of the elder Kim Jong-chul, though he is unlikely to emerge as a candidate for succession: he was passed over by the pair’s father Kim Jong-il to succeed him, and has reportedly never shown a propensity for leadership nor demonstrated the characteristics that one might expect from a leader of a country such as North Korea.

Kim Jong-un is believed to have at least three children with his wife Ri Sol-ju, with the oldest believed to be male. Kim’s first born is still only thought to be around ten years of age, however, and almost no other publicly available information about him exists. Secrecy surrounding the Kim children is not unusual, but it is likely to be several years at least before the oldest of Kim Jong-un’s children assumes any sort of public role. This makes him an unlikely candidate for succession in the near future, even if it is likely that he is the long-term heir apparent.

That just leaves Kim Jong-un’s sister, Kim Yo-jong, who has in recent years taken on a much more visible role within the North Korean leadership apparatus. Much of this has revolved around foreign affairs, and has included both high-profile diplomatic efforts as well as more bombastic activities. Even as Kim Yo-jong’s career has experienced its ups and downs—including a recent demotion from the Workers’ Party of Korea politburo—she remains a very influential figure in North Korean politics because of her ties and access to Kim Jong-un. North Korea remains a very patriarchal society, however, and it is not clear how Kim Yo-jong would be received should she assume power. Still, from at least a dynastic perspective Yo-jong is perhaps the most immediate choice for the succession.

There is, however, another possibility involving something akin to a stewardship that would remain in place until such a time as Kim Jong-un’s son is deemed ready to assume power. It was recently revealed that one of the outcomes of North Korea’s Eight Party Congress held this past January was the creation of a new “first secretary” position that may amount to a de facto number two within the North Korean regime. While this may be the continuation of a trend that has seen Kim, now very secure in his authority, delegating more responsibility to his subordinates, it is also possible that the position was created with an eye to the future as an emergency measure should Kim become incapacitated.

Whatever does end up happening in the event of Kim Jong-un’s sudden death, it will no doubt be a period of significant tension and anxiety as North Korea—and the rest of the world—take stock.