What Is Kim Jong-un Doing in Seclusion? 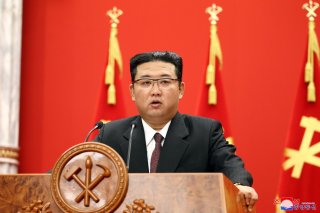 North Korean leader Kim Jong-un has been known to disappear from public view for long stretches. During one period in 2020, Kim’s disappearance even led to widespread rumors around the world that he was ill or even dead. Earlier this year, Kim emerged from an extended absence appearing to have lost a great deal of weight, leading to another round of speculation about his personal health and his hold on power.

Kim, who will mark a decade in power this December, has now been absent from public appearances for close to two weeks, NK News reported, marking his eighth absence of more than two weeks just this year. Kim last appeared in public on October 11, when he posed in front of weapons that were unveiled shortly before North Korea’s latest missile launch.

The report stated that “satellite images have shown renewed activity off the coast of his family palace in Wonsan,” suggesting that Kim has been spending time at the estate believed to be his childhood home.

“The activity suggests the DPRK (Democratic People's Republic of Korea) leader… may be spending yet more time at his childhood home on the east coast this month, while his subordinates oversee cabinet meetings and missile tests and make economic inspections around the country,” NK News said.

The site also published a chart detailing Kim’s absences from public view since he took power in late 2011.

“Boats that may be his multimillion-dollar yachts appeared cruising at Kim’s private Wonsan beach on Oct. 24 and away from one of his large leisure crafts anchored at a nearby island on Oct. 25,” according to Planet Labs satellite imagery. However, the quality of the images “makes it difficult to determine the precise type of boats being used,” NK News said.

While state media has reported on Kim’s actions, including letters he sent to foreign leaders and an appearance at a cemetery, state media has not released photographs of Kim. Kim was not present for the recent missile test.

Meanwhile, Radio Free Asia (RFA) reported this week that Kim has built luxury villas over the old home of Kim Il-Sung, his grandfather and the first leader of North Korea. The home is known as “Mansion No. 5,” and was the home of the current leader’s grandfather between 1950 and 1970.

“Terraced houses are being built on the banks of the Potong River, and they are being touted as an example of modern development in the Kim Jong Un era,” a Pyongyang resident told RFA.