What Samsung's OLED TVs Mean for the Future of Electronics 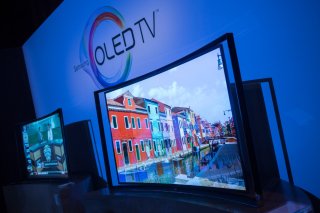 Reports are coming in that Samsung is planning something it no one thought it would do: release OLED TVs.

According to Korea JoongAng Daily, Samsung Electronics is expected to reach a three-trillion-won ($2.5 billion) deal with LG Display in order to purchase a combination of OLED and LCD panels. It would mark a first for Samsung in using OLED panels for TVs.

“LG Display is set to supply LCD and OLED panels in a deal worth 3 trillion won annually to Samsung Electronics beginning next year,” Jeff Kim, an analyst at KB Securities, said in a note this week, according to the Korean daily. Kim also wrote that as of this month, Samsung is expected to have “already completed product development and planning for OLED TVs.” Those TVs would then roll out in the first half of 2022.

Neither side commented to JoonAng Daily on its report about the deal.

The OLED panels coming from LG are not to be confused with the QD-OLED panels, which Samsung Display has been manufacturing themselves of late, with mass production reportedly beginning in November. However, that report said that the QD-OLED panels are unlikely to be sufficient for Samsung’s short-term needs.

Meanwhile, the website T3 looked this week at what Samsung’s dive into OLED could mean for the QLED market—namely, lower prices.

Amid some speculation about what the “pecking order” will be of Samsung’s TVs, T3 cited recent reporting from The Elec, which hints for Samsung’s 8K mini-LED to remain at the top, followed by the new hybrid QD-OLED TVs, with the 4K Neo QLED mini-LED TVs below that.

“Logically, the price of 4K Neo QLED TVs will have to drop to make 'room' in Samsung's line-up for the new OLED TVs. And that's the exciting part,” the article said.

The Korea JoongAng Daily piece also included another piece of news about Samsung’s plans, contra T3’s thoughts: Neither form of OLED TV will appear at CES next month.

“Neither the QD-OLED nor WOLED TVs will be introduced at CES,” a Samsung spokesperson said. “But the issue might be covered during the press briefing at the event.”

The Consumer Electronics Show (CES), which was held entirely virtually in 2021, will return with an in-person event in early January. But its status is very much in flux, with several major exhibitors announcing that they won’t be participating in person. This includes, per Engadget, Amazon, Meta (Facebook), and T-Mobile. T-Mobile CEO Mike Sievert even announced the cancellation of his planned keynote address at the Las Vegas conference. The organizers, however, have vowed to go ahead with the live show.

Samsung is not among the companies that have said they are dropping out of the show. In fact, the company released a statement on Tuesday about their plans for 2022’s CES.

Jong-Hee “JH” Han, who was announced earlier this month as Samsung Electronics’ new vice chairman and CEO, hinted this week at what will be discussed in the company’s pre-show keynote, which he himself will be hosting, under the title “Together for Tomorrow.”

“This reality has strengthened our commitment to creating new and meaningful experiences for our customers. It has led us to explore better ways to bring our devices more closely together, for improved connectivity and customization,” Han said in the announcement, which did not go into much specifics about what Samsung has plans in terms of TV announcements.

“At Samsung, we believe your devices should reflect your lifestyle, your passions, and your personal tastes, from the smartphones in your hand to your appliances and screens. And by working together seamlessly, they should make your life easier, so you can do more of the things you love.”

Samsung made another, very different high-profile announcement this week: A deal with Netflix to place its products on the popular Netflix series Emily in Paris, which debuted its second season on that streaming service this week. The main character’s boss on the show is played by Samsung brand ambassador Philippine Leroy-Beaulieu.

The campaign includes the Galaxy Z Flip 5G phone, The Galaxy Watch3, and the Serif and Sero TVs, as well as ads, social influencer content, and even a TikTok filter.

“At Samsung, we are always at the forefront of creativity and innovation,” Benjamin Braun, Samsung CMO for Europe, said in a statement.

“We are excited to partner with Netflix for the second season of one of their biggest shows, Emily in Paris, and to see Sylvie wielding the iconic Galaxy Z Flip 5G fits the personality of the device perfectly. We’re looking forward to developing this partnership further and deeper in the future.”