Who Is Lee Jae-myung? 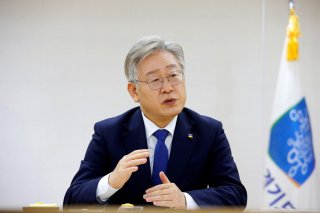 Lee Jae-myung was a child working on baseball glove assembly at the Dongma Rubber Factory when his left arm got caught in the press and smashed it. Despite the severity of the injury, which would result in his being exempted from military service, he kept working. Such was the plight of many a worker in the brutal factory conditions of 1970s Korea.

Candidate Lee has been telling this story on the campaign trail across South Korea as he runs for president. “I am of lowly origin. Mine is a lowly family, so if you look around you’ll find a lot of dirty things,” he said at an event in Gunsan, North Jeolla province on December 4.

The seventh child in a family of nine living in the mountains of North Gyeongsang, Lee had to walk on a trail over streams to get to his primary school. He once had to skip an art contest to clean the toilets, because his family couldn’t afford crayons, according to an account of Lee’s bio published by the Maekyung Media Group (MK).

As a teenager, his family moved to Seongnam, where Lee worked in the factories. His first job paid 10,000 won a month, which would be something over 100,000 Korean won in modern-day terms, or just around $100. Lee felt depressed after he suffered multiple accidents and saw no future for himself. He envied the students he saw wearing uniforms on his way to work. Lee attempted suicide twice at age sixteen, according to the MK.

It was then that he decided he was going to study hard enough to pass the college entrance exam and blossom to defeat his circumstances. He passed the bar exam. He became the mayor of the city where he once toiled, Seongmin, in 2010. He became governor of Gyeonggi, the most populous province, which contains Seongmin, in 2018. On March 9, 2022, he could become the next president of the Republic of Korea.

“Don’t flowers bloom even in the mud?” he said in Gunsan.

He has burnished his image as a fighter triumphing over deprivation throughout his political career, including during his failed campaign for the presidency in 2017. In his telling, it was because of his strength that he rose up out of an environment that would have stifled the dreams of most people. As governor, he boasted that he “gets it done.” As in, he got Seongnam’s social welfare program off the ground, implementing a raft of benefits including free postpartum care and free school uniforms. As governor of Gyeonggi, he implemented the largest coronavirus stimulus program in the country.

He’s combative on the debate stage and full of energy in front of cameras. The JoongAng Daily’s video host introduced him thusly: “Some say he’s dangerous. Some say he’s a real man.”

But the very attributes that make him appear strong have also gotten him in trouble. His extreme self-confidence is viewed as arrogance by some. The wittiness some people hear coming off his sharp tongue sounds like abuse to others.

While serving as mayor in 2012, Lee left angry messages to his sister-in-law cursing at her, a controversy that dogged him during his gubernatorial term and which opposition candidate Yoon Seok-youl recently raised. His sister-in-law had accused him of abusing power to force his brother, her husband, into a mental institute, claims which led to an investigation that acquitted Lee. In an interview with TV Choson earlier in December, Lee named not being able to reconcile with that brother before he died in 2017 as his biggest regret in life.

Lee has also turned off some supporters of current President Moon Jae-in with his frequent attacks on Moon administration figures during the primary campaign. Lee Jae-myung defeated the favorite of the Moon faction, former Prime Minister Lee Nak-yeon, for the Democratic Party’s nomination by waging an insurgency. During the primary, he compared his own “earthen spoon” upbringing to the “elite” background of his opponent, a charge which the other Lee found unfair.

Surveys show the eventual nominee Lee now has an approval rating in the progressive stronghold of Jeolla North and South almost half of previous Democratic nominees. If Lee cannot turn out voters in the region, he could have trouble winning the election.

The latest controversy about his speech is his portrayal of his own family and background as “lowly.” It comes off to many as if he is disparaging the lives of the poor, suggesting they are lacking something of ethics or strength needed to better themselves.

“My father was a janitor. My mother sold toilet paper,” Lee said, rattling off a description of his humble origins.

Whether he intended to or not, those words are “highly likely to cause misunderstandings to the people who have the jobs he mentioned,” Lee Hak-young wrote in a column in the Korea Economic Daily.

The Justice Party, a social-democratic third party, accused Lee of using his biography to cover for his lack of an agenda to help the poor. Yeo Yeong-guk, a representative of the Justice Party, said Lee is “more concerned about the taxes of the rich than the rent of the homeless.”

Lee promises to implement universal basic income, pointing back to his successes in Gyeonggi. He says his own experiences informed his political philosophy of “Eokgang Buyak” which roughly translates as “restrain the strong, support the weak.”

But Lee is also under fire for his approval of a massive project in Seongnam that resulted in inflated profits for a developer and triggered a criminal investigation of the investors. He apologized when one of his former aides was indicted but claimed no knowledge of the bribery.

Whatever voters think of Lee, there is one thing that is undeniable. “I never thought a runny-nosed brat like you would become a mayor, a governor, and then a presidential candidate,” a former classmate laughed at a campaign stop in his lowly old ancestral home.