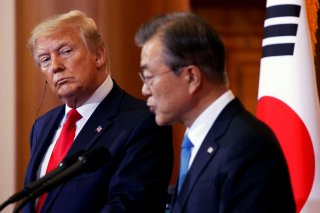 In an April 6 tweet, U.S. Secretary of Defense Mark Esper wrote that he appreciated South Korean Defense Minister Jeong Kyeong-doo taking his call to discuss “the importance of equitable burden sharing across the alliance.” After all, he noted, “It is critical that we get a fair, balanced, and comprehensive agreement signed quickly.” Esper closed with the hashtag #KatchiKapshida, a romanization of the Korean phrase, “Let’s go Together.” It’s a catch phrase common among U.S.-ROK alliance managers and, under current circumstances, pure banality.

At the moment, the allies are neither together nor is it clear where they are going. Despite COVID-19, North Korea continues to build up its conventional—and we have to assume WMD—programs as well. This is why finding a resolution to the cost-sharing issue and restoring confidence in the alliance should not be put on a back burner. It should be prioritized.

But that is likely wishful thinking. From the outset, President Trump’s approach toward allies has consisted of calculated obtuseness. As a senior White House official with direct access to the president told The Atlantic’s Jeffrey Goldberg: “The Trump Doctrine is ‘We’re America, Bitch.’ That’s the Trump Doctrine.” Another senior national-security official distilled the same message, if in slightly less sophomoric terms: “Permanent destabilization creates American advantage…They’ll see over time that it doesn’t pay to argue with us.” He was talking about allies and U.S. administration officials have followed suit.

Esper’s tweet was not the first time he weighed in on the issue. He and Secretary of State Pompeo publicly upbraided Seoul in their January 16 WSJ editorial, titled: “Seoul Is an Ally, Not a Dependent: Seoul Can and Should Contribute to its own National Defense.” However, the Secretaries of Defense and State—and above all the president they serve—demonstrate a deeply misguided understanding of the relationship. Trump and administration officials speak and act as though Washington pays most of the cost of the alliance, is entirely responsible for Seoul’s defense, and receives no reciprocity. They are wrong on every count.

According to Esper and Pompeo’s own calculation, Seoul covers roughly one-third of the nearly $3 billion “directly associated with the stationing of U.S. forces on the Korean peninsula.” They argue, however, that those costs are rising, so Seoul should pay more. During the ongoing Special Measure Agreement (SMA) talks, Seoul has agreed to do so, including 13 percent more than last year’s contribution of roughly $900 million. Trump officials argue, though, that basing troops is only a portion of the cost, that it goes beyond just boots on the ground to high-technology contributions Washington makes to Seoul’s defense.

This relates back to another distortion, namely, that Seoul depends entirely on Washington for its defense and such an economically advanced country should not be so dependent. Since U.S. forces are there to defend South Korea, Trump contends, they should foot the bill. As he said during the 2016 campaign, 28,500 U.S. forces in South Korea stand on the line between South Korea and the dangerous Kim Jong-un.

This blithely ignores the fact that Seoul already contributes the overwhelming majority of manpower, material and military assets to deterrence and defense on the Korean Peninsula. Undoubtedly, the 28,500 U.S. military personnel in South Korea provide significant firepower capabilities as well as critical logistical, ISR, and command and control functions for the alliance. They’re also integral to evacuation of U.S. civilians during a conflict and the complex logistics surrounding the wartime reception, staging, onward movement and integration (RSOI) of additional U.S. forces. Still, South Korea deploys roughly 600,000 standing troops: 464,000 army, 70,000 navy, and 65,000 air force. They took over frontline defense in the 1970s and are developing or acquiring higher-end capabilities, often through enormous purchases from U.S. defense manufacturers. The Moon Administration has consistently increased its defense budget, by 7 percent in 2018, 8.2 percent in 2019, and 7.4 percent in 2020, while also gradually increasing the proportion of its budget spent on force improvement.

For Kim Jong-un (as for his father and grandfather), the possibility of hundreds of thousands of U.S. forces being deployed to the Korean Peninsula backed by the U.S. nuclear umbrella, is the ultimate deterrent. Historically, this has been the final backstop to South Korea’s national defense. Yet, in light of Pyongyang’s increasingly advanced asymmetric capabilities, any conflict could quickly turn the peninsula into what expert Van Jackson calls an “anti-access environment,” with ROK forces taking on the brunt of the fight. Even so, this back-and-forth estimation of relative contributions misses the salient point: the alliance is a division of labor. By design, the U.S. deploys certain assets and capabilities that Seoul either cannot deploy (due to treaty restrictions and obligations) or has yet to develop and acquire, while it still supplies much else.

Here, the critical observer contends that this is exactly the point. Seoul clearly possesses advanced defense capabilities and a large military establishment. They need to do more. Back of this argument, though, is another misguided sentiment; an attitude not only that the U.S. contributes too much but that it is somehow an altruistic contribution. Trump himself has said Washington gets practically nothing in return. Trump acts as though the alliance is a one-off transaction, existing in some sort of strategic and historical vacuum. Alternatively, officials such as Esper and Pompeo tout the alliance as the linchpin of the U.S. Indo-Pacific Strategy yet do not seem to properly grasp the implications of such a statement.

The U.S. presence has never been just about Korea. From its origins, U.S. policymakers have seen it as embedded within (and subordinate to) a larger strategic tapestry. Even local conditions on the peninsula have been seen by military officers as offering unique benefits for the U.S. military writ large. One of the reasons U.S. officers opposed Jimmy Carter’s attempted troop withdrawal policy in the late 1970 was they valued the frontline and potentially escalatory environment because it offered a good training ground for American soldiers. The same logic prevails today.

A crucial combat component of the 28,500 U.S. troops is the rotational armored brigade combat team (ACBT). Starting in 2015, the Army transformed the last permanently forward-stationed brigade of the 2nd Infantry Division into a rotational ACBT. Since then various ACBTs have deployed to the peninsula from different bases and divisions within the United States. The brigade commanders see the deployments as an opportunity for soldiers’ professional development and as a force multiplier because of the unit cohesion and training that goes into the deployments. The rotational process has also helps build more armored brigades and rotational force readiness across the U.S. Army. This fits squarely within a post-Cold War trend in U.S. defense strategy, focused on increased mobility and expeditionary capabilities alongside lighter forward deployed footprints.

The Trump administration’s Indo-Pacific Strategy is aimed at China. If, indeed, the U.S.-ROK alliance is a linchpin of that strategy, which is what the administration’s national security strategy unequivocally states, one would think shoring up the alliance would be crucial. It does not pay to extort and alienate the allies that by your own estimation are crucial to the success of the strategy. In fact, as Kyle Ferrier shows, Seoul has already borne some significant costs, including upwards of $25 billion dollars in Chinese economic retribution for welcoming the U.S. deployment of THAAD missile batteries to South Korea.

The THAAD deployment was done by the then Park Geun-hye administration and added to the overall defense of allied forces. Moreover, Beijing violated international norms in its use of economic coercion. However, the U.S. response was completely inadequate. Aside from a few statements critical of Beijing’s actions, Washington did next to nothing to support Seoul, which felt it had been left out to dry. To be fair, the THAAD deployment and minimal U.S. response occurred under President Obama, yet upon entering office (while China continued to economically retaliate against the ROK), Trump exacerbated the issue by telling Seoul it needed to pay the $1 billion-dollar cost of the deployment. U.S. officials call the alliance the linchpin of their strategy and seem to think that Seoul fully understands and aligns with such pronouncements, but the THAAD experience and ongoing dispute over SMA talks directly undermines the messaging.

In fact, questions abound when it comes to the Trump administration’s original demand that Seoul pay $5 billion annually, since lowered to $4 billion. Setting aside the fact that Trump may have arbitrarily set the original number, one wonders what exactly America is demanding. At $4 billion, Seoul would be covering all the costs directly related to U.S. forces and then an additional $1 billion (or a 33 percent premium) but for what? Is it to cover the rotational deployment and offshore exercises of U.S. units as some reports indicate; deployments and exercises which U.S. officers themselves say benefit the military in multiple ways having nothing to do with Korea? Is the large demand to cover the cost of the THAAD batteries? This would be consistent with Esper and Pompeo’s mention of advanced capabilities beyond just boots on the ground. When demanding such an exorbitant price tag are U.S. officials also willing to give the ROK greater operational authority in relation to such rotational deployments and exercises or defense systems? Or is Seoul simply being told to pay more and accept however America intends to act?