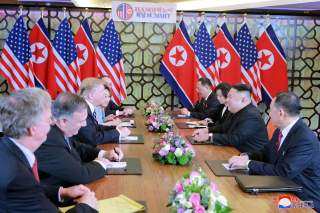 Whatever results from the February Trump-Kim summit – a path towards denuclearization or a faux peace – the litmus test of a successful policy is whether it increases US and allied security while preserving steadfast American influence and credibility in Asia.

Editor’s Note: This article was first published on March 15, 2019 as a paper in Pacific Forum’s Issues and Insights series.

United States policy towards North Korea has for decades been guided by the priority of denuclearization despite dramatic changes in political and material circumstances on the Korean Peninsula and in Northeast Asia. Pre-summit reports of the possibility of the United States opening liaison offices in North Korea and President Trump’s willingness to declare an end to the Korean War in Hanoi represented positive steps towards improving the US relationship with both actors on the peninsula. But the political step of transforming relations can only be sustained by pursuing a credible objective of arms reduction short of denuclearization and presenting a credible deal by encouraging political buy-in from Congress. Finally, the North Korean nuclear issue should be framed as a geopolitical problem so that policy objectives are embedded in a broader regional strategy. Denuclearization driven by US withdrawal or imprudent accommodation that erodes US credibility would be a strategic failure of US policy.

Policymakers must allow assessments from the intelligence community to guide their objectives. The unique strategic culture, government structure, and history of North Korea are essential to determining the efficacy of any North Korea policy. In a recent testimony to the Senate Armed Services Committee, Admiral Philip Davidson, head of the Indo-Pacific Command, assessed that North Korea will only negotiate partial denuclearization in return for US and international concessions. Director of National Intelligence Dan Coats in a January 2019 testimony before the Senate Intelligence Committee supported this evaluation. In a confidential report submitted to the UNSC in February, U.N. sanctions monitors found the DPRK’s growing violations of United Nations Security Council Resolutions (UNSCRs) “render the latest UN sanctions ineffective.”

These assessments affirm two things. First, the maximum pressure campaign has not mobilized the requisite threshold of pressure to negotiate anything near full denuclearization. Both Pyongyang’s sanctions evasion ingenuity and Beijing’s discreet alleviation of economic pressure frustrate this goal. Unless the administration is willing to risk implementing secondary sanctions on Chinese companies that facilitate North Korean violations of UNSC resolutions and US law, the goal of the maximum pressure policy will remain out of reach. While patiently elongating the pressure campaign could strengthen the US negotiating position, it would also allow Kim Jong Un to advance the quantity and sophistication of his arsenal and could compromise a narrow window for rapprochement.

Second, the above assessments undermine the credibility of any US policy of “final, fully, verified denuclearization” (FFVD). Reaffirming FFVD as the objective while engaging in empty-handed leader-level summits only rhetorically denies legitimacy to North Korean nukes but could also evolve into a roadblock in negotiations. At this point, it would be politically injudicious for the Trump administration to officially step back from the denuclearization goal – just as it may be for Kim to accept it. But Washington should not on principle dismiss a negotiated roadmap to something short of that goal if it meaningfully reduces the threat.

A policy objective of FFVD also lacks credibility because Kim has never agreed to FFVD, and the only indicators we have of his strategic intentions – high-level statements, speeches, and legislation under Kim Jong Un’s tenure – all directly oppose it. Kim Jong Un came to power in 2011. In 2012, North Korea revised its Constitution to enshrine its nuclear status. One year later in 2013, North Korea decreed a law “consolidating possession of nuclear weapons state for self-defense” which outlines the first formal declaration of a nuclear policy, including the purely defensive purpose of acquiring nukes and the impossibility of relinquishing them.

Arms control is consistent with Kim’s objective of being recognized as a nuclear power with a minimal capability. In Kim’s 2018 New Year’s Address that prompted the current thaw in relations, Kim highlighted the theretofore irreversible development of North Korean weapons but also stated that “the United States needs to be clearly aware that this is not merely a threat but a reality.” Kim is seeking acceptance as a responsible nuclear power by suggesting that capability need not imply threat. It is also in Kim’s interest to demonstrate this responsibility in order to garner legitimacy as a nuclear power and eventually dissolve international pressure. Kim has echoed the pledges of established nuclear state parties to the Nuclear Non-Proliferation Regime (NPT) – to refrain from using, testing, and transferring nuclear weapons, as well as seek the eventual elimination of them. Mirroring these commitments, the Singapore Summit Joint Statement affirms the goal of the “complete denuclearization of the Korean Peninsula” that suggests nothing resembling unilateral disarmament.

If unilateral disarmament is unlikely but the status quo is unsustainable and volatile, the US should entertain concessions that stabilize the security situation but preserve influence on the peninsula. Any deal will need to reassure North Korea of its ability to deter existential threats, which means it must retain a minimal capability. An insistence on FFVD pursues the opposite: It tolerates deadlock that allows Kim time to perfect his capabilities, will be harder to roll back later, and will likely lead to renewed hostility. An approach outlined by Ankit Panda and John Warden accommodates both US and North Korean security interests by limiting North Korea’s advance from a mere defensive deterrent to one that can expand its coercive leverage, allowing it to pursue nuclear blackmail.

A pivot towards arms control should also be closely coordinated with Seoul to manage public perception in both countries and reduce political fallout. This will require a nuanced and coordinated approach to public engagement and diplomacy, as well as adjustments in deterrence and reassurance strategies to manage the alliance. Overall, it is pragmatic to accept a limited retention of capabilities while managing the threat and retaining a strong alliance coordination.

Reduce the threat by improving the political relationship

In many ways, North Korea only represents a grave threat if it remains an adversary. The singular focus on the quantity and character of North Korean capabilities overlooks the political dimension of the threat and draws attention away from practical arms control measures to manage it. Analysts still debate the role of nuclear weapons in North Korea’s defense strategy. If Kim views their utility as defensive – as North Korea’s 2013 law outlines – the threat is acceptable in circumstances short of preventive war. While North Korea has hinted at the intention to launch pre-emptive strikes to deter an invasion, a rehabilitated political relationship would significantly reduce misperceptions and therefore risk of use or miscalculation. One expert highlighted the real dangers of miscalculation when Trump’s 2017 maximum pressure approach rubbed up against North Korea’s strategic-cultural response to pressure. A renewed relationship would end explicit threats and reduce risks of inadvertent escalation as well as the risks posed by North Korea's non-transparent command and control system.

Former National Security Advisor Gen. H.R. McMaster operated under a hardline assumption that North Korea views nuclear weapons as providing offensive utility – namely to launch an invasion of South Korea and deter US involvement by credibly threatening the homeland with nuclear-capped ICBMs. Under Kim Jong Un’s tenure, North Korea’s behavior and public statements offer little evidence of such intent. Further, North Korea has yet to demonstrate re-entry and miniaturization technology, nor reliable control of targeting and detonation. It is also unlikely that North Korea’s rudimentary capabilities would embolden it to credibly threaten countries under the umbrella of a superior US arsenal. But this could all change if a deadlock ensues.

Opening liaison offices and declaring an end to the Korean War are steps toward peaceful relations that could transform North Korean society’s perceptions of the US and create a new economic pillar for Kim’s regime legitimacy. In September 2018, the North Korean Foreign Ministry stated that a declaration was an urgent step towards a peace regime on the peninsula. Kim’s 2019 New Year’s speech reiterated support for the Worker Party’s new strategic line and the directive to focus national efforts towards economic construction. A declaration could help Kim cultivate the political will to re-allocate resources away from the nuclear enterprise and towards this second component of the byungjin policy. Critics argue that North Korea does not want a declaration because state propaganda relies on the omnipresent threat of US aggression to validate its socialist policies. However, if Kim seeks to pivot towards a new pillar of legitimacy to contend with the growing influx of information and an era of unprecedented marketization in North Korea, a declaration could catalyze a fundamental transformation.