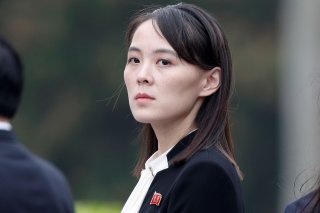 On May 9, 2018, U.S. Secretary of State Mike Pompeo handed a document to Kim Jong-un at a meeting during his second visit to North Korea.

While the content was kept confidential, Kim Jong-un passed the document to Kim Young-cheol, the Vice Chairman of the Workers’ Party of Korea.

However, after the meeting, Kim’s sister, Kim Yo-jung, who was waiting outside of the conference room, ran to Kim Young-cheol and took the documents away from him.

Kim Young-cheol was unable to say a word when his document was stolen, and the bizarre act of this incident was openly observed by in America, making it a much-discussed episode.

Since then, scheduled talks between the United States and North Korea have been cancelled, and many people rather have focused on the position of Kim Yo-jung, especially speculating on whether she is the Second Leader of North Korea.

On March 2, 2020, Kim Yo-jung released the first statement under her name, speaking about South Korea and the United States. On the same day, the South Korean security agency immediately expressed regret that North Korea had just tested new missile launches. Following this statement, Kim Yo-jung made her second statement to respond particularly to the South Korean government’s complaint.

President Trump, who is in the middle of dealing with the worldwide COVID-19 pandemic, recently sent a letter to North Korean leader Kim Jong-un for an agreement to cooperate with each other. On March 22, Pyongyang announced that it has received Trump’s letter, however, the exact contents of the correspondence is not publicly known.

Yet, instead of Kim Jong-un, it was Kim Yo-jung who responded to the letter. On the one hand, she reacted with a statement of appreciation. On the other hand, there are two lines from her statement that need a critical reflection. She wrote:

These statements claim that the world is not dealing with the North Korean problem ethically enough. Kim Yo-jung’s remarks argue that the U.S.-North Korean relationship has not been improved because the United States and the international community are immoral, which, of course, does not sound right. This aspect of the statement that Ms. Kim spit out is an insult to America.

Kim Jong-un already knows that North Korea had nothing to gain in the last two negotiations with the United States. While there has been a possibility to negotiate with the United States in the past few months, North Korea has turned it down as it still considers America as an enemy. On top of that, we must not forget the fact that Kim Yo-jung herself is sanctioned by the U.S. government as a perpetrator of human rights abuses of North Koreans.

To conclude, all the world has thoroughly reaffirmed that it appears North Korea would not give up its nuclear weapons during the two rounds of discussion between the United States and North Korea.

If sanctions against North Korea are mitigated at this time, North Korea will try again to further enslave ordinary North Koreans through political propaganda boasting that the United States has been defeated by North Korea, a powerful nuclear nation. Even worse, there could be a tragedy if the international community officially recognizes North Korea as a nuclear power country.

What the international community can do is to tear down the regime, a totalitarian dictatorship, and consequently to liberate North Koreans.That alone can bring true peace to the Korean Peninsula as well as peace around the world.

In 1939, Nazi leader Adolf Hitler and British Prime Minister Neville Chamberlain signed a peace agreement, but World War II broke out and millions of people died including many Jews.

Over the past two years, when President Trump met Kim Jong-un, we have forgotten about all the political prisoners and innocent people dying at labor camps and re-education camps spread across North Korea.

In addition, the international community keeps silent about North Korean refugees who are in danger of repatriation by the brutal Chinese government.

The only thing that the international community remembers is the “3,000,000” North Korean people who died of hunger and around “80,000-120,000” of political prisoners. I must say these North Koreans are not just numbers but are human beings who can and should enjoy human rights.

Currently, with COVID-19, we cannot even confirm the exact number of infection cases in political prison camps, training camps, and let alone the information on health check-ups for the elderly, vulnerable children, and pregnant women.

It should be borne in mind that North Korea is a brutal totalitarian state that has never before existed on the planet, which functions by only one president, one judge, one broadcaster, one soldier, and one religious leader completely different from communism and socialism that we understand.

If we continue to sow seeds without results, even in the spring that is coming up, we will be met by a spring of pain and despair. We will let 25 million innocent people who live in isolation from the world suffer and die.

If we talk about North Korea without the people themselves, we will continue to fail and fall drowning into a deadly swamp called North Korea.