Why Did the Trump Administration Scold South Korea in the Wall Street Journal? 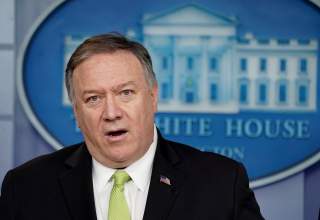 The cost-sharing negotiations between Washington and Seoul have been tough, brutal, and draining. But as the months have ticked by, at least some progress was being reported. On January 8, a senior State Department official told reporters at a briefing that “I would assess that we are certainly a little further afield than we were during the last round.”  While this wasn’t exactly a popping of the champagne-like disclosure, it was a far cry from last November, when the U.S. delegation broke off negotiations in a hurry and scolded South Korean negotiators in public for being unreasonable.

So why, despite the talks proceeding towards a muddy middle ground, did Secretary of State Mike Pompeo and Secretary of Defense Mark Esper think it was wise to air their grievances publicly in the Wall Street Journal? Why, knowing that the issue of cost-sharing is a highly emotional one for the South Korean public, did the two cabinet officers decide to press the envelope in one of America’s major periodicals?

The heart of the issue is not so much what Pompeo and Esper said in their joint op-ed. There was nothing terribly unusual in the piece. Most of it was a resuscitation of what the Trump administration has been saying about South Korea for the last three years: as one of the world’s wealthiest countries, Seoul has the resources to contribute more monetarily and militarily to the U.S.-South Korean alliance. It’s quite a logical and justifiable argument to make. Indeed, the stronger Seoul’s military capability is, the less Washington will have to do in the event of a conflict. You will have trouble finding any American on the street, Democrat, Republican, or Independent, who disagrees with the notion that rich countries should pay more of the tab and do embrace more responsibility on behalf of their own security.

In fact, Pompeo and Esper give Seoul great credit for stepping up to the plate. They cite the 8.2% year-over-year increase in South Korea’s defense budget and the country’s plans to continue pouring cash into purchasing U.S. military equipment. As the secretaries write, “In past decades South Korea has made major contributions to the alliance. It has modernized its fighter aircraft and enhanced antisubmarine and ballistic-missile defense capabilities.” These sound like rosy words indeed.

The issue isn’t what was said but rather that it was said publicly. There was no reason for this piece to be written and published at all, particularly when cost-sharing negotiations are proceeding and the two sides are actually negotiating rather than reciting maximalist talking points. The administration likely felt the urge to publish it, thinking it would increase Washington’s leverage by putting the fear of god into South Korean President Moon Jae-in’s government.

However, the piece does the opposite. Mintaro Oba, a former State Department Korea Desk officer said it best with a tweet: “There is zero negotiating value to the Secretaries of State and Defense writing in The WSJ that South Korea should pay more for defense. In fact, it harms the alliance and publicly raises the stakes so much it's harder to get to an agreeable compromise.”

While arguing that the U.S.-South Korea alliance will undergo long-term harm is debatable (one would hope that a 70-plus year relationship that U.S. officials consistently describe as “iron clad” is strong enough to survive a single, unpleasant negotiation), Oba’s second point is well worth considering. Rarely is an intricate negotiation best served by shining a spotlight on it, where domestic politics on both sides of the table have the opportunity to rear its ugly head and stiffen the spines of the negotiators. As polarizing as the domestic politics around the 2015 Iran nuclear agreement proved to be, could you imagine how much more difficult those negotiations would have been if then-Secretary of State John Kerry played hardball with the Iranians in the pages of the New York Times? Could you imagine if then-Secretary of State George Shultz decided to pontificate in the Washington Post about the Soviet Union’s position in the middle of talks over the Intermediate-Range Nuclear Forces Treaty?

Politics is often the death of pragmatic statesmanship.  Allow politics into the room, and you make the job of the officials sitting around the table that much harder. Either Secretaries Pompeo and Esper didn’t get the memo or they don’t understand some of the most elementary tenants of diplomacy.