Why the DMZ Meeting Between Trump and Kim Matters 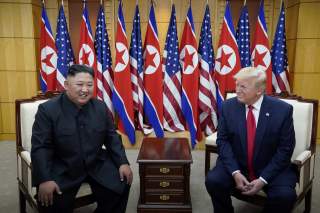 President Trump met with North Korean leader Kim Jong Un on Sunday and became the first sitting U.S. president to step foot into North Korea by stepping over the demarcation line at the demilitarized zone separating the two Koreas. It was the third time Trump met Kim, and he took the opportunity to announce that U.S.-DPRK nuclear talks would resume. Kim and Trump also met privately for 50 minutes after they shook hands at the DMZ. The event on Sunday was longer than Trump had earlier indicated at the G20 meeting in Osaka, Japan.

The impromptu, unconventional meeting, which was partly initiated via Twitter, was significant because it can foster trust between the two leaders. The failure to achieve an agreement in Hanoi in February was likely in part due to weak trust between the two countries. Insiders have speculated that the two sides asked too much from one another at that meeting but lacked the trust needed to facilitate a big step.

It is notable that John Bolton, Trump's National Security Adviser, was not in attendance on this trip. It's also notable that South Korean President Moon Jae-in was present and appeared to help broker the meeting despite the DPRK's claim that South Korea is meddling in its affairs. Recent U.S. tensions with Iran only make personal trust between Trump and Kim more critical.

The photo-op gives both Kim and Trump domestic political cover to stave off calls from hawkish advisers for a more hostile approach toward the relationship. It gives the two countries time to set up a third summit, perhaps early next year, with a reduced risk of provocations in the meantime that could throw diplomacy off track.

Some commentators are mocking the meeting as a publicity stunt but politics are often about symbolism, messaging, and framing and a return to friendlier terms are certainly better than a return to the 2017 threats of nuclear war. An act like this one can be both political theater and helpful in reducing the risk of war.

Trump called his walk with Kim over the demarcation line “a great honor” and Kim called it significant “because it means we want to bring an end to the unpleasant past” and that it was “a courageous and determined act.” The two leaders appeared smiling together.

The whole episode upends several US foreign policy conventions. Diplomacy-by-tweet has been criticized as sloppy yet it has proven effective, and Twitter may be regarded years from now as the telegraph or fax machine are seen today. Twitter allows the president to circumvent the media and float informal proposals.

The walk across the demarcation line breaks what has been regarded as a taboo. It also calls into question the basis for the nearly-70 years of hostility since the Korea War. The two countries are technically still at war. Yet, a majority of the American public supports diplomacy with North Korea and rejects war with the country. In the context of calls for ending America’s endless wars, the extension of conflict with North Korea, Iran, and Cuba might appear anachronistic.

Finally, complaints that Trump is only talking with Kim to get a Nobel Peace Prize misunderstands that such a prize would only be given if it was deserved. Moreover, peace is an intrinsic virtue worth supporting on its own.

As several U.S. military officers have mentioned to me, U.S. war policy in places like Iraq and North Korea is often based on the informal fallacy of sunk costs. Human brains are wired to avoid a sense of loss--known as loss aversion. We have spent so much life and treasure that ending these wars now would seem like a waste. But a critical thinker should question that emotional conclusion.

Pyongyang is a brutal, tyrannical regime but we have to ask ourselves how we can make a positive difference for the Korean people. Promoting peace, engagement, and economic opening is the better bet.