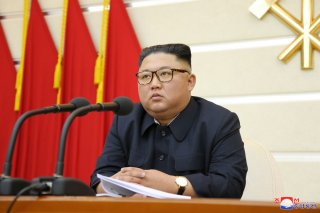 Amidst the existential nightmare unfolding with the coronavirus, comes the news that North Korea has ramped up its missile testing and lost all interest in a dialogue with the United States. At a March meeting with G-7 Foreign Ministers, Secretary of State Pompeo called on all nations to maintain diplomatic and economic pressure on North Korea over its nuclear and ballistic missile programs. Pompeo’s ill-timed call to uphold sanctions even during the global pandemic escalated tensions and triggered Pyongyang’s chilling response: North Korea has become “more zealous for our important planned projects aimed to repay the U.S. with actual horror and unrest for the sufferings it has inflicted upon our people​.”

While some may call this mere bluster, Pyongyang’s warning serves as a grim reminder that the existential nuclear threat is not going on lockdown during this pandemic. It is a clear and present danger like COVID-19, invisible but very much alive. And like the virus, it has been ignored for perilously too long. Former U.S. Secretary of Defense William J. Perry has sounded the alarm: “Today, the danger of some sort of a nuclear catastrophe is greater than it was during the Cold War and most people are blissfully unaware of this danger.”

We are now awake to the COVID-19 catastrophe, the enormity of the pain and suffering, the staggering human and economic costs. Worst case projections estimate that COVID-19 deaths could be in the millions globally, with variable forecasts over the past month for America. Estimates show Americans could lose anywhere from 60,000 to 2.2 million or more of their loved ones to the virus because Washington ignored repeated warnings and failed to act before it was too late. This is the price of sleepwalking in the face of this existential threat, which is horrific, but these numbers nonetheless pale in comparison to the estimated tens of millions in North and South Korea, Japan, Guam, Hawaii and beyond who could die in the mass carnage if nuclear weapons were to be launched by Kim or Trump in a moment of anger, accident, miscalculation or mistake.

Existential threats by nature do not discriminate. Like nuclear weapons, COVID-19 attacks human beings indiscriminately, oblivious to race, religion, gender, ideology or country of origin. Like radioactive fallout, the virus does not recognize borders, and like nuclear war, it spares no one—whether rich, poor, Korean, American, sanctioned or unsanctioned.

If Washington doesn't take emergency measures to stop the spread of COVID-19 in the human population as a whole, America fails to do so at its own peril. Outbreaks in other countries increase the risk of outbreaks around the world. This is why it makes no sense to uphold sanctions that in any way hinder a country’s capacity to combat the virus. U.N. High Commissioner for Human Rights Michelle Bachelet has called for humanitarian exemptions to sanctions because “in a context of global pandemic, impeding medical efforts in one country heightens the risk for all of us.” In other words, what America does to the people of North Korea, Iran, Venezuela, Russia, Cuba and other sanctioned countries, America does to itself.

Thus, it is a moral imperative Washington recognizes that despite deep differences with adversaries like North Korea, America has a larger existential shared interest in cooperating and collectively marshalling all U.S. resources to eradicate COVID-19. This is why U.N. Secretary-General António Guterres has called for an immediate global ceasefire, “it is time to put armed conflict on lockdown and focus together on the true fight of our lives—the COVID-19 pandemic… That is what our human family needs, now more than ever.” Guterres’s urgent plea, echoed by Pope Francis, has found a welcome audience in an open letter supporting the U.N. leader’s call for a global ceasefire that is going viral.

Guterres calls on Americans further to unite now in solidarity to protect the most vulnerable and susceptible to COVID-19 everywhere—those ravaged by war, women, children, the elderly, homeless and displaced populations, along with those living in the poorest countries with weak health care infrastructures like North Korea. During this global existential crisis, Bachelet and Guterres are inviting Americans to rise to the better angels of our nature, transcend our differences and get our priorities straight: to stop wasting precious time and resources on conflict and war and mobilize as a “human family” to give it everything we’ve got to save lives.

If the United States applies Bachelet and Guterres’ recommendations to North Korea, Washington can make progress on the existential threat of COVID-19 and the existential threat of a nuclear exchange with Pyongyang. America and North Korea can work together to halt the spread of COVID-19, thereby create goodwill and de-escalate tensions. Washington can and should take further steps to reduce tensions and the risk of a nuclear missile launch due to anger, accident, miscalculation or mistake.

Americans wake up every morning to soaring death tolls, the tragic cost of waiting too long to act to contain COVID-19. It is already late—for the United States, for North Korea, for the world. Millions of lives are at stake. The time to act on these existential threats is now.