Why North Korea’s Missile Launches Are ‘Business as Usual’ 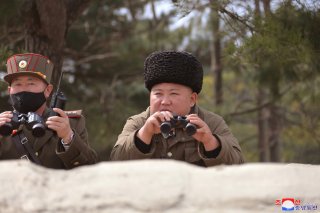 On Saturday, March 21, North Korea fired a pair of short-range ballistic missiles toward the Sea of Japan. The missiles were fired from a site near Sonchon in North Pyongyang province and traveled around 410 kilometers, reaching an altitude of around 50 km. The launch was North Korea’s third missile test of the year, beginning with the first test on March 1.

South Korea’s Joint Chiefs of Staff criticized the launch, stating “such military action by North Korea is highly inappropriate at a time when COVID-19 is causing difficulties worldwide.”

Reports suggest that North Korean officials have been secretly asking for international help to increase coronavirus testing as the pandemic threatens to cripple an already vulnerable nation. Another report claims that 200 soldiers are dead and another 4,000 are in quarantine. Clearly, North Korea is not immune to the crisis.

Why Kim Is Testing Missiles Now:

However, it would be incorrect to assume that North Korea would change its policy because of the crisis. In fact, quite the opposite is true. It is in times of crisis that Kim Jong-un would find missile tests ‘highly appropriate’ to project strength to his people.

In the last few weeks, the state-owned Rodong Sinmun newspaper has shown a maskless Kim observing missile launches with his masked officers. Experts suggest that Kim would like to show people that he is not afraid of the virus, that he is above it.

Considering how carefully cultivated Kim’s image is, this is a clear move to assure people that he continues to be unfazed by the crisis unfolding around the world. The missile test thus provides an opportunity for Kim to appear in the public eye.

While the missile tests provide a photo-op for Kim, it ensures consistency in policy in spite of the crisis. In his annual New Year’s speech, Kim outlines the primary goal to “build up our strength sufficiently enough to keep hostile forces at bay so that they would not dare to threaten our sovereignty and security.” He also warned that the world would witness a new strategic weapon in the near future.

Therefore, the launches are less provocative than they are simply tests. This is consistent throughout time, as North Korea uses launches to either provoke others or test the capabilities of new weapons. The most recent launch could be seen as preparation for the new strategic weapon Kim promised in his new year speech.

Immediately following the March 21 launch, Kim echoed this thought, saying the launches would make “decisive contributions to the realization of the Party’s strategic plan to make a radical change in the national defense strategy.” Consistency during the pandemic projects Kim’s strength and relentlessness to achieve the goals set at the beginning of the year.

Following the March 21 launch, Kim Yo Jong, Kim Jong-un’s sister and the first vice department director of the Central Committee of the Worker’s Party of Korea, issued a statement acknowledging a letter to Kim from President Trump.

In it, Kim Yo Jong commended Trump for sending the letter, while warning that it was insufficient to restart bilateral negotiations. The launch reminds the United States of the threat North Korea poses, almost as if to force a U.S. reaction. The delicate balance between force and diplomacy seems to be Pyongyang’s way of telling the United States that there is room for negotiation.

Kim Jong-un’s message is this: business as usual. With or without coronavirus, 2020 was going to be the year North Korea ramped up its efforts to build its defense program. Launches are a means to check the capability of their weapons. It also helps defend the narrative that Kim Jong-un will not back down and that the country will continue to fight hostile forces.

Missile tests during the crisis provide the perfect opportunity to keep the door open to any deal with the U.S., all the while ensuring security from any outside threats. North Korea is remarkably consistent in that regard, and things should be no different this time.

Rintaro Nishimura is a Korean Studies Spring 2020 Research Assistant at the Center for the National Interest.