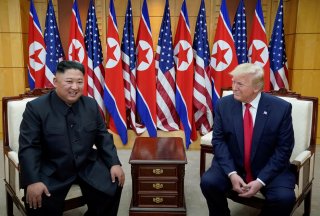 No one knows exactly what would happen if Kim Jong-un died suddenly. But we can be certain that the North Korean regime has meticulously considered every possible disruptive scenario and is prepared to guard against outside interference. After all, this is a regime that emerged from the rubble of indiscriminate U.S. bombing campaigns that destroyed 80 percent of its cities. History shows that North Korea is extremely resilient to some of the worst crises, including famine in the 1990s, proving many a distinguished expert who predicted the country’s imminent collapse wrong, time and time again.

Shortly after the hashtag #KIMJONGUNDEAD went viral with 300,000 tweets, South Korea’s Special Adviser to the President, Moon Chung-in, asserted, “Our government position is firm. Kim Jong Un is alive and well.” While this may help to temporarily put the rumors to rest, the speed and furor with which speculation over Kim’s death spread on social media and major news outlets should give us all pause.

That so much U.S. thinking on North Korea relies on guesswork, paranoia, and intrigue—even among the best experts and policy wonks—is cause for great concern. To state the obvious, uncertainty and the lack of clear communication channels makes a bad combination for two nuclear-armed states that are still technically at war. The unresolved Korean War has only ever allowed mistrust and antagonism between Washington and Pyongyang to grow in the place of understanding and reconciliation.

This is why we need a wholly new approach toward North Korea that embraces peacebuilding. For seven decades, U.S. policy has favored diplomatic isolation, economic sanctions, and military pressure against North Korea—the results of which have only worsened relations, caused undue harm to everyday North Koreans and increased the risk of conflict in the region. Furthermore, this broken U.S. policy has impeded inter-Korean reconciliation and cooperation, from blocking joint Korean economic projects to literally halting an inter-Korean train project in its tracks. This has delayed peace for 80 million Koreans and kept thousands of Korean families separated and held hostage to an unresolved war. The absence of a diplomatic relationship has only made us embarrassingly ill-equipped to verify thinly-sourced reports as consequential as Kim’s death, and, in the event that it were true, to avoid the worst-case scenarios.

It doesn’t have to be this way. Instead of speculating on North Korean palace intrigue, we would all be better off finding ways to improve U.S.-North Korea relations. Until we sincerely attempt to deal with North Korea as it is—instead of holding onto the fantasy that it will collapse or surrender—we will never make it out of this dangerous cycle.

Catherine Killough is Advocacy and Leadership Coordinator and Christine Ahn is Founder and Executive Director of Women Cross DMZ.