Why North Korea Does Not Want Joe Biden Elected 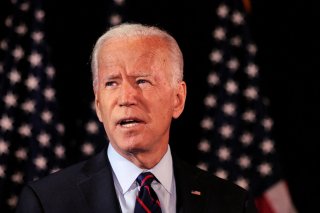 For most of American history, the United States has more often than not wisely navigated the rough waters of international relations based on the biblical belief that nations and people generally tend to act out of self-interest. If one is to accurately anticipate the behavior of Kim Jong-un, the Supreme Leader of North Korea, over the remainder of the year, it would be wise to remember that adage regarding the human proclivity toward self-regard. As much as one would like to think altruism is the rule, one reason it is valued as much as it is and extolled by those who preach about its merits, is because it is generally the exception and not the rule.

North Korea realizes it is to its own advantage to continue to remind the world of its military strength. However, Pyongyang likely to do so with two caveats. First, North Korea will showcase its might in a restrained way, because it is to North Korea’s advantage for President Trump to be re-elected. Second, North Korea covets attention and is unlikely to act too dramatically until the coronavirus daily death and case numbers, that now dominate the news, are at least somewhat lower than they are now.

Regarding point number one above, no other American head of state has been able to forge the relationship with North Korea that President Trump has. North Korea is well aware of this fact. In contrast, many Democrats, including Senate minority leader Chuck Schumer and likely Democratic Presidential nominee Joseph Biden, have been highly critical of Trump for reaching out to the North Korean dictator. Just before the 2019 Hanoi summit, North Korea accused Democrats of undermining the meeting by “chilling the atmosphere” before the important gathering commenced. Moreover, North Korea’s “Central News Agency” called Biden “an imbecile,” while concurrently referring to the good relationship that exists between Donald Trump and Kim Jong-un. North Korean leaders are also concerned that Joe Biden is seemingly in mental decline due to his age and so perhaps even if he wins the election, he might not complete or serve two terms. With this in mind, Biden’s choice for a running mate becomes all the more vital. Within this context, North Korea is concerned that if Biden’s running mate one day becomes President of the United States, that they would one day have to encounter an American Command in Chief in Washington with which they are unfamiliar.

As previously mentioned, North Korea craves attention and believes that some of its most memorable actions were taken by easily grabbing the headlines during a dearth of distracting news stories. If North Korea does do some sabre rattling it will be after America’s sense of alarm over the coronavirus has subsided, at least to some degree. North Korea is unlikely, in 2020, to intensify its degree of provocative actions, especially missile tests, to 2016 levels seen during the Obama Administration, unless one of two scenarios occurs. First, destabilizing events cause Kim Jong-un to feel threatened. Second, the Democratic candidate wins the presidential election in early November. That is not to say that North Korea will desist in reminding the world of its military might before the November elections. Nevertheless, there is some hope that any brandishing of its most sophisticated weaponry will be limited to its ICBMs appearing in a Pyongyang parade rather than propelling them into the sky. Will North Korea likely launch missiles before the November election? Quite possibly, but it is likely that it will shoot some of its less sophisticated missiles instead of ICBMs.

On President Trump’s end, the easing of tensions with North Korea will likely be regarded as one of his foremost international accomplishments. With this in mind, President Trump will probably seek an additional summit with Kim Jong-un and there is a real possibility that this could occur in 2020. It is vital to remember that many of this nation’s post-World War II adversaries have viewed Republicans as the Party of peace; whether it was due to concluding the Korean War, shuttle diplomacy, or ending the Cold War in Europe. As long as President Trump is in office the bellicose days of 2016 will not return. However, if Biden wins in November, all bets are off.