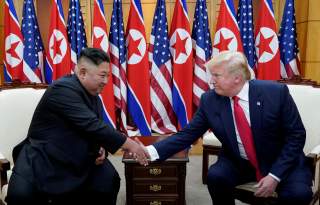 On June 30, 2019, President Donald Trump, accompanied by Chairman Kim Jong-un of North Korea, crossed the border at Panmunjom in the Demilitarized Zone (DMZ). In doing so, Trump became the first sitting U.S. president to step onto North Korean soil. Also present was South Korean president Moon Jae-in, who is keen to help mediate between America and North Korea in hopes of reviving the denuclearization talks which stalled during the Hanoi summit.

This unprecedented three-way summit appears to have been essentially a made-for-TV spectacular designed for Trump and Kim’s domestic audiences. Trump’s publicity machine constantly emphasizes the feel-good one-to-one personal relationship between Trump and Kim, but a fundamental question remains: is there or will there be any actual progress on denuclearization?

So what did Kim get from the meeting? It seems he is closer to persuading Trump to accept the North Korean agenda: no pressure for regime change, and a freeze on North Korea’s missile and nuclear program instead of a ban, thus tacitly recognizing North Korea as a nuclear power. Probably it means that the dismantling of the Yongbyon nuclear facility will be traded for the partial lifting of sanctions against North Korea. If this is the outcome, then clearly Kim will be the big winner of the meeting.

And what about Moon? Despite his broad smiles during the photo session, he seems ready to make significant concessions to the United States. These may include joining in with sanctions against Huawei or participating in U.S.-led Freedom of Navigation Operations in the South China Sea. Moreover, Moon might buy more U.S.-made weapons and systems or agree to increased burden-sharing to support America’s military presence. Any such concessions would reveal Moon as a serious loser from the meeting.

As for Trump, he successfully distracted attention from his utter failure on North Korean denuclearization, by pretending that his personal relationship with Kim is some kind of historic accomplishment. Kim, of course, is happy to indulge this pathetic charade, since he is playing the same game. Moreover, by focusing the attention of U.S. TV screens on foreign policy, Trump also displaced coverage of his democratic opponents’ presidential primary campaigns, and of the continuing investigations into his own conduct. All-in-all this meeting was a big personal and political win for Trump.

So, putting this eye-catching TV show to one side, what is actually happening now on the Korean Peninsula? First, is there any prospect that we may finally escape from the military standoff which has blighted the peninsula for almost seven decades? There is no hint of conventional arms control or reduction, an entirely distinct issue from that of North Korean nuclear capabilities, even though bilateral joint military drills between the Republic of Korea Armed Forces and U.S. Forces Korea have been scaled-down. There has also been some work to recover the remains of U.S. personnel missing in action from the Korean War, but none of this has changed the facts on the ground: peace has not broken out on the Korean Peninsula.

Second, is there now no possibility at all that the North Korean nuclear warheads and missile delivery systems can be removed? Instead is there a chance that a freeze the best that can now be achieved? If so, then North Korea will retain the ability to threaten U.S. cities with nuclear weapons for the indefinite future. But even a freeze would require a comprehensive listing of North Korean nuclear assets and facilities, and Trump has conspicuously failed to get this list. Indeed, North Korea would probably not adhere to any nuclear freeze agreement, though their current stock of twenty-to-sixty nuclear bombs is already sufficient to achieve recognition as a nuclear power. The situations of India, Pakistan and Israel, are all different, but in every case the possession of an effective nuclear deterrent has resulted in permanent geopolitical shifts.

Third, is it time to sign a peace treaty to finally end the Korean War? But the Korean Peninsula is still divided into two countries with competing ideologies that remain technically at war. Furthermore, North Korea and China have always insisted on a complete withdrawal of all foreign troops from the Korean Peninsula. Does this suggest that China will leave Koreans to determine their own affairs? Surely Moon is not so naïve, and though his earnest pursuit of a genuine Korean Peace Process may be laudable, it is not yet practicable, given the scant evidence that any of the other parties are acting in good faith.

In summary, then: the Panmunjom meeting of June 30, 2019, between Trump and Kim, with Moon as the facilitator, was a triumph of presentation over substance, and delivered very much less than it promised. The military standoff on the Korean Peninsula continues unabated, no-one seems serious about a genuine peace treaty and no progress has been made towards North Korean denuclearization. Indeed, all of the leaders demonstrated their hypocrisy, though Moon showed more sincerity than Trump or Kim. The meeting was a shallow exercise in personal promotion by the three leaders for their domestic ends. It was a TV entertainment spectacular and feel-good moment, which made no useful contribution to the urgent and dire problems of the Korean Peninsula, whose people are the starkest losers from this fiasco.

Sukjoon Yoon is a retired captain of ROK Navy and senior fellow at the Korea Institute for Military Affairs.