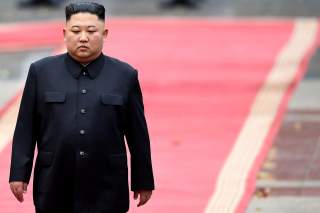 There are two theories to explain why North Korea is now negotiating with the United States instead of pursuing its nuclear and missile tests. The first is that President Donald Trump’s “maximum pressure” sanctions finally managed to punch North Korean leader Kim Jong Un into the ropes. In this case, Kim would be trying to negotiate the terms of his surrender. The second theory is that he is calling checkmate after showing that his missiles can reach any corner of the United States. That would suggest on the contrary that he is proposing Americans to call it quits and cut the losses on each side.

The lack of reliable information on North Korea’s internal situation meant the only way to determine which theory was correct was to wait and see how each side’s bargaining power would play out in a negotiation. The Trump-Kim summit in Hanoi was highly revealing in that respect. A much-awaited UN report on the performance of sanctions only confirmed the picture. Evidently, “maximum pressure” is failing to break North Korea.

U.S. policy has long been based on the assumption that a sanctions-based siege would eventually force North Korea to raise the white flag and lay down arms. This logic suggests dialing sanctions up to “maximum pressure” should quickly have forced Kim on his knees, ready to give up anything for relief. That is not at all what happened in Hanoi.

The post–summit press conferences suggested instead that it was Kim who was setting the conditions. He did not put offer up any existing part of his nuclear arsenal. He proposed to stop its development by dismantling his main source of nuclear material and by permanently halting nuclear and missile testing. In exchange he wanted an end to all UN sanctions imposed after the fourth North Korean nuclear test in 2016. His foreign minister, Ri Yong-ho, made clear this was a final offer.

The North Koreans displayed a bravado that fits much better with the theory of a checkmate than that of a surrender. His vice foreign minister, Choi Sun-hui, even warned that North Korea would resume weapons testing if the United States did not seize the opportunity that was presented to it. She doubled down on the ultimatum at a rare press conference a couple weeks later.

Of course, the North Koreans could be bluffing. Maybe the country is actually about to collapse, and the offer was a last-ditch attempt at securing a face-saving deal. Historically, however, the United States has almost systematically drawn the shorter straw when it bet that North Korea was at the end of its rope.

Every time the United States gave up on agreements, the opportunity cost was to let North Korea make rapid progress on its nuclear program. Neglecting obligations under the Agreed Framework of 1994 led the North Koreans to covertly rebuild their fissile material production facilities a couple years later. Tiptoeing around the Six-Party Talks declaration of September 19, 2005, resulted in the first nuclear bomb test in 2006. Stonewalling after the declaration of February 13, 2007, was followed by a second bomb test in 2009. Walking from the Leap Day talks of 2012 then ended up with a third bomb test in 2013. Giving up on talks altogether on account of “strategic patience” or “maximum pressure” concluded with three more tests over 2016 and 2017.

How many more bets on North Korean surrender can America afford to go wrong? The North Koreans have now shown they can already make bombs at least ten times the strength of the one that fell on Hiroshima. If this round of talks collapses, then we can expect them to perfect their delivery vehicles. They still have work to do on their submarine-launched ballistic missiles and the re-entry shields for their intercontinental ballistic missiles.

Some commentators have interpreted the fact that Kim asked to be relieved from sanctions in Hanoi as proof that they are working. This is mistaking success in wreaking havoc upon the North Korean population for success in convincing the North Korean regime to disarm.

The bulk of the UN Panel of Experts’ 2019 report on sanctions further confirmed how adept Kim had become at evading sanctions in the areas he prioritized. Shell companies and bank accounts in Southeast Asia, fishing rights sales to the Chinese, gold mining in the Congo, weapons sales to Yemenis and Libyans, military instruction in Sierra Leone, the list goes on. It is also clear from the report that shutting North Korea out from legitimate trade is pushing it to act as an outlaw in recouping its losses, for instance by hacking foreign banks or stealing ship identities to siphon fuel.

The fact that North Korea still manages to procure what it wants or needs most, however, does not mean the people do not suffer. Annex 87 of the report for instance provides a list of “humanitarian-sensitive” items that have been blocked in particular by “maximum pressure” sanctions. This includes irrigation equipment, food processors, medical sterilizers, water purifiers, or anything that has a piece of metal in it, even if it is as small as a staple.

Annex 85 also details how financial sanctions have made it nearly impossible for humanitarian agencies and organization to operate in North Korea. One result of the increasing hurdles has been the withdrawal of the Global Fund’s aid to fight tuberculosis, a move estimated as of November 2018 to risk an additional 155,000 to 210,000 deaths in North Korea over the following five years.

It would nevertheless be naïve to assume that North Koreans will blame this added torment on their government. What they are told day in and day out is that it is Washington that is refusing to make peace. North Korea, the story goes, has the right to defend itself with the same weapons as America. The Party mouthpiece, Rodong Sinmun, recently drove home this message, concluding that North Korea would rather “starve or freeze to death” rather than give up its “national self-esteem.”

Even if North Koreans disagreed with the official view, sanctions cannot coerce a policy change if the victims have no agency in decisionmaking. This is a totalitarian government that maintained course through a million-death famine in the 1990s.

“Maximum pressure” is failing to break North Korea also because the country is still in a much stronger position than it was when the Soviet Union collapsed. The rise of China and years of booming trade with it, in particular, have helped North Korea to recover from the Soviet crisis then and to develop its internal market and industries.

North Korean trade with China has nose-dived under “maximum pressure,” but clearly not so much as to pose an existential threat. Beijing reported trade volumes of $2.38 billion with North Korea in 2018. That is a far cry from the peak of $7 billion in 2014, but far above the measly $350 million of 1999. In fact, it is still above the volumes China was exchanging with North Korea just ten years ago, when South Korea still had its Sunshine policy.

China’s much-scrutinized trade statistics do not tell the whole story either, because they do not include smuggling or aid. According to sources cited by the South Koreans newspaper Chosun Ilbo, fuel shipments to North Korea doubled following Kim’s summit with Chinese leader Xi Jinping in June 2018.

Ultimately, Xi has little reason to be zealous in implementing sanctions when Trump is waging a trade war on China and is designating it as a strategic rival in his “America First” National Security Strategy. China seems to benefit much more from helping North Korea get a peace treaty with the United States, which would reduce the instability on its doorstep on the Korean Peninsula.

Trump’s “maximum pressure and engagement” policy was designed to maximize U.S. leverage before he sat to negotiate North Korea. It may not have sufficed to break the country into surrender, but it still ensures that the United States gets the best possible shot at resolving the problem once and for all. Wasting the shot now makes little to no sense.

Both sides are now taunting each other following the failure to strike a deal in Hanoi. On the one side, National Security Adviser John Bolton threatens pressure beyond “maximum pressure.” On the other, Vice Foreign Minister Choe Son-hui warns that North Korea could resume nuclear and missile testing. The longer this goes on, the more difficult it will be for both sides to climb down from their high horses and find a compromise on the basis of what was on the table in Hanoi. Yet such a compromise is the only reasonable way out of the crisis.

If diplomacy fails, we will again be thrust before the senseless risk of conflict escalation with a nuclear power that keeps asking for peace. There is no point in starting a nuclear war to punish North Korea for developing the capabilities to conduct nuclear war. “We could, obviously, destroy North Korea with our arsenals,” explained former President Obama, “But aside from the humanitarian cost of that, they are right next door to our vital ally, [South] Korea.”