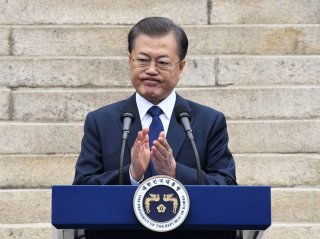 On April 15, South Korea’s general election was held with stunning results. The current ruling party won an overwhelming number of seats. Of the total 300 seats, the Democratic Party won a total of 180 seats, including representation from its affiliated proportional party. This is the first supermajority since Korea’s democratization in 1987. The ruling party has won all major elections, including the presidential election, local elections and the general elections. Through these three elections, it is believed that the mainstream political landscape in South Korea has changed from conservative to progressive. The outcome of this landslide victory could also gauge the direction of Seoul’s foreign policy in the future.

First, President Moon Jae-in seeks to resolve South Korea’s law and constitution’s contradiction toward North Korea. For instance, he now has the supermajority he needs to enact laws related to economic cooperation with North Korea and will be able to pass the budget, enact orders and abolish laws. Revising the South Korean constitution would take 200 seats, but that could be possible if only 10 seats are secured by the opposition party, as the total number of pan-opposition parties total more than 190 seats. Many South Koreans have criticized Moon’s foreign policy toward North Korea. Moon, despite continuous courtship of Pyongyang, has not been able to resolve the North Korean nuclear crisis, resulting in deadlock. On February 27, a petition to impeach Moon reached 1 million signatures and was also critical about Moon’s foreign policy toward North Korea and China. However, Moon now has legitimacy through this election.

One way to gauge the future is what Woo Hee-jong, the current leader of the Democratic Party’s proportional representation party, said in a statement. Woo said, “Maybe the National Security Law could be abolished.” Abolishing the National Security Law has long been a long-cherished desire of the liberal government. This is because democratic figures during the military regime were imprisoned or tortured for a long time because of that law. And they insist that this law’s abolition can ensure freedom of thought and expression. However, since democratization, the bill has never been abused. On the contrary, the side effects of the bill’s repeal are greater. Without it, lots of organizations praising North Korea could spring up, and North Korea’s ideas, publications and videos would also be freely accessible. In addition, this law’s abolition would let North Korea spies spread their ideology to South Koreans, even though Seoul can’t spread its ideology to North Korea. This is not freedom of expression and thought. Given the security situation in South Korea, this is a deal with no upside. Another reason the current ruling party wants to abolish the National Security Law is that it makes it difficult to seek cooperative relations with North Korea. Under the constitution of the Republic of Korea, the North Korean communist group cannot be called a “state.” Article 3 of the constitution declares South Korea’s territory to be across the entire Korean Peninsula and North Korea is not designated as a state.

Therefore, the National Security Law, a sub-law under Article 7 of the constitution, defines North Korea as an anti-state organization and bans praise and encouragement of it. The Democratic Party has long pointed out that the law has greatly blocked exchanges and cooperation between the two Koreas, and that basic agreements and exchanges over cooperation for unification cannot be achieved. However, if the bill is scrapped, North Korea would legally be able to promote, praise and agitate for the North, but South Korea would continue to be punished by the North’s own security laws for incitement against it. For example, if the bill is abolished, the law will not punish any criminal organizations in question even if they promote the legitimacy of the unification plan of the Goryeo Federation and do not promote South Korea’s unification policy. Those in favor of abolishing the bill say North Korean groups can be punished with other criminal laws without the National Security Law. However, the Criminal Law of the Republic of Korea is limited to spying for the enemy or leaking military secrets. Critics continue to point out that North Korea supporters cannot be punished by applying normal criminal law because it is an anti-government organization, not an enemy country.

Second, the current ruling party could try to push for another constitutional revision at the end of Moon’s administration. It is highly likely that this constitutional amendment would be revised in consideration of North Korea and the goal of unification. Most worrisome is the intent to delete the term “liberal” from liberal democracy. South Korea constitution Article 4 states “The Republic of Korea shall seek unification and shall formulate and carry out a policy of peaceful unification based on the basic free and democratic order.” Moon’s regime tried to delete the term “free” in this article in his first suggested revision of the Constitution. However, many South Korean opposed this revision so it failed. This attempt was dangerous because the term “democratic” by itself also encompasses people’s democracy or social democracy. For example, in the days of West and East Germany, West Germany said liberal democracy and East Germany called their system socialism and democracy, but the problem can be seen by the fact that East Germany had no democracy. In response, the Democratic Party reversed its mistake, but the National Assembly’s special committee on constitutional revision also removed “freedom” from the constitutional revision bill. On June 22, 2018, the draft standards for writing middle and high school textbooks also confirmed that liberal democracy would be changed to democracy. It also deleted a phrase from the textbook that the Republic of Korea is the only legitimate government in the Korea Peninsula. This is seen as a sign of recognizing North Korea as another country. It is highly likely the Democratic Party will limit Korea’s territory to south of the 38th parallel or that it would accept North Korea as a country in the next constitutional revision.

Finally, despite sanctions by the international community, Moon is going to continue to push a peace process including economic ties with North Korea. For instance, Moon is allowing individual tourists to go visit North Korea and is resuming Mt. Kumgang tours, inter-Korean economic cooperation, and other various proposed approaches. Especially in the case of inter-Korean economic cooperation, the National Assembly’s budget deliberation was only possible through negotiations with opposition parties, but now that it has secured a majority of 180 seats, it can be predicted that such compromise will no longer be necessary. After the coronavirus, North Korea has lost many sources for gaining foreign currency such as tourism and dispatching overseas workers. So it is likely that North Korea would also positively consider South Korea’s suggestions for trade and tourism.

This strengthening of cooperation with North Korea will inevitably strengthen ties with China. In particular, the South Korean government sent 3 million masks to China in the early days of the Corona virus and only limited some travel with China. In fact, Moon opened the door to travel in the end despite receiving the 1 million signature petition against that and for his impeachment and a new general election. South Korea allowed Chinese citizens to visit, even though 130 countries banned Chinese entry. If Xi Jinping doesn’t give any reward to such a friendly move, it shows the international community that the benefits of any country keeping its loyalty to Beijing are very small. So China’s leader Xi Jinping has canceled his visit to Japan in return to their restrictions, but he is so far sticking to his visit to Seoul. In the wake of that impending visit, Xi Jinping will try to give South Korea a gift that is related to North Korea such as joint nuclear negotiation or infrastructure cooperation. However, Xi Jinping’s gift is likely to be based on the premise that South Korea would cooperate on a OneBelt-OneRoad(OBOR).

China’s OBOR initiative has been largely tarnished by worsening public opinion abroad in the wake of the coronavirus. In particular, the damage to France and Italy, for example, has been devastating for countries that have implemented pro-China policies. As a result, these governments are now likely to engage in anti-China policies with antipathy toward the existing OBOR initiatives. In order to restore this image, South Korea is likely considered by China to be the best prospective cooperative partner in terms of something they can use for good public relations. Through the COVID-19 incident, South Korea has strengthened its national brand and soft power. Innovative coronavirus inspection methods, people’s resolute response, and the government’s quick decisions and policies have created synergies, creating impressive results. China, on the other hand, had to rush to repair its image of cover-up, manipulation and forgery. It is clear that Seoul’s cooperation in diluting this negative image would be of great help in Beijing’s OBOR initiative.

Therefore, it is highly likely that Xi Jinping would actively ask for OBOR participation with South Korea, and that Seoul’s new supermajority administration would consider it positively. However, it is expected that Seoul will focus on “linking” this with South Korea’s existing foreign policy, instead of calling it a “participation” in the OBOR Initiative, in order to avoid U.S. concerns over South Korean-Chinese cooperation. Last year on December 23, Moon was in the Great Hall of the People in Beijing, and stated “In the future, let’s implement various cooperation projects so that China’s OBOR and South Korea’s New Southern and New Northern policies can create synergy.” This cooperation project is most likely to be a railway cooperation linking the two Koreas and the three northeastern provinces. It has been South Korea’s long-cherished desire to connect to the continent through rail links between the two Koreas. Despite the incumbent administration’s friendly attitude toward North Korea, however, the cost is astronomical to handle all of North Korea’s underdeveloped railway infrastructure at South Korea’s expense. Therefore, considering the cost issue and the huge market of the three northeastern provinces, it is highly likely that China would push for the establishment of OBOR railway routes to at least the three northeastern provinces and Beijing.