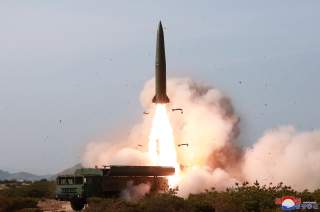 On June 19, Chinese President Xi Jinping pledged solidarity and friendship with North Korea “no matter how the international situation changes,” praising the country’s “right direction” in seeking a political settlement on the Korean Peninsula, and expressing support for its “rational concerns.” This makes it even less likely that the United States could force a North Korean surrender and disarmament. China represents the quasi-totality of the external trade of its neighbor and military ally, North Korea. This gives Beijing determining leverage over the effectiveness of the U.S.-led sanctions regime. Accordingly, it is becoming clear that the only realistic way out of the nuclear crisis is a negotiated settlement that addresses not just U.S. security interests, but also North Korean ones.

President Donald Trump appears to understand that such a settlement is increasingly difficult to avoid, if only to end U.S. dependence on Chinese cooperation for a country as dangerous as North Korea. He invested considerable political capital in becoming the first sitting U.S. president to meet with a North Korean leader. The resulting joint statement included a telling quid pro quo: “President Trump committed to provide security guarantees to [North Korea], and Chairman Kim Jong Un reaffirmed his firm and unwavering commitment to complete denuclearization of the Korean Peninsula.”

The notion of security guarantee provides a way to achieve an initial deescalating deal with North Korea without sacrificing sanctions leverage. The Trump administration has publicly insisted multiple times that it would not agree to relief from United Nations sanctions before full, verifiable, and irreversible denuclearization. Indeed, in a follow-up summit in Hanoi, Trump rejected a North Korean request for such relief. Yet his administration has no publicly entrenched position on security guarantees, something North Korea is evidently interested in.

Reports indicate North Korea unsuccessfully asked for security guarantees in the run-up to the Hanoi summit in the form of “a peace agreement to formally end the Korean War.” North Korean Foreign Minister Ri Yong-ho also said right after the summit that his country would have been more interested in security guarantees than sanctions relief, and had asked for the latter only because it had concluded that military measures would be “more burdensome” on the United States. In a major policy speech on April 12, North Korean leader Kim Jong-un said he would “no longer set [his] heart on such a trivial issue as lifting sanctions by the hostile forces” and insisted instead on the withdrawal of the U.S. “hostile policy.” This provides an opening for advancing denuclearization talks through security guarantees such as a peace or non-aggression agreement, military confidence-building measures and/or force reductions.

It is a matter of common sense that in a standoff where all sides point guns at each other, the weaker party will not put down its gun if it believes it will then be shot dead. North Korea has consistently presented its nuclear weapons as a necessary deterrent against U.S. military threats, and has asked for security guarantees in return for giving them up.

In the Agreed Framework of 1994, North Korea agreed to return to the Nuclear Nonproliferation Treaty (NPT) and to dismantle its nuclear material production facilities if the United States would “provide formal assurances to the D.P.R.K., against the threat or use of nuclear weapons by the U.S.”

In the Six-Party Talks Joint Statement of 2005, the country “committed to abandoning all nuclear weapons and existing nuclear programs” in return for the United States “affirm[ing] that it has no nuclear weapons on the Korean Peninsula and has no intention to attack or invade [North Korea] with nuclear or conventional weapons.”

That said, the North Koreans may ask for a higher price now that they have nuclear weapons ten times the strength of the Hiroshima bomb and missiles with the range to reach the continental United States. President Barack Obama may also have inadvertently raised the bar by bombing Libya in 2011, after the country gave up its nuclear program eight years earlier. A similar dynamic arises today, as President Trump now threatens Iran with “obliteration” only about a year after renouncing a nuclear deal with Teheran.

North Korea has long sought a peace agreement with the United States to replace the Korean War Armistice Agreement. The record includes a 1974 peace offer sent by the North Korean Supreme People’s Assembly to the U.S. Congress and a 1987 letter by North Korean leader Kim Il-sung to President Ronald Reagan.

While Washington has shied away from the notion of directly concluding a peace agreement with Pyongyang, the question has been addressed indirectly in nuclear talks. The Agreed Framework of 1994 provided that “[t]he two sides will move toward full normalization of political and economic relations.” The Joint Statement of 2005 then provided that they “undertook to respect each other’s sovereignty, exist peacefully together, and take steps to normalize their relations.” The Statement added that the “directly related parties” of the Six-Party Talks committed to “negotiate a permanent peace regime on the Korean Peninsula.”

Another point of contention has been whether a peace or non-aggression agreement should be legally binding. Washington has hitherto shied away from committing itself legally. The U.S. Senate has never ratified a denuclearization deal with North Korea and Washington even explicitly disputed that the Agreed Framework was binding. The deals concluded in the context of the Six-Party Talks were ambiguously entitled “Joint Statement” in 2005 and “Initial Actions for Implementation” in 2007. While the idea of a non-binding end-of-war declaration was floated in the run-up to the Hanoi summit, North Korea has contested that such an instrument should be considered a bargaining chip.

The experience of the two Koreas shows that it is possible to agree to military confidence-building measures (CBMs) with the North. A first attempt in the Basic Agreement of 1991 failed because the South Korean National Assembly refused to ratify it. The two sides nevertheless successfully concluded an Agreement on the Prevention of Naval Clashes in Korea’s West Sea in 2004. They also recently agreed to a wide-ranging inter-Korean military agreement in September 2018.

This latter agreement first called for further development of demilitarized buffer zones on land, air, and the sea. On land, the Koreas agreed to transform the Armistice-defined Demilitarized Zone (DMZ) into a “peace zone,” notably through a phased withdrawal of guard posts and a demilitarization of the so-called “Joint Security Area.” On the sea, the Agreement provides for an undefined “maritime peace zone” in which only unarmed vessels would be allowed, as well as an embryonic joint fishing zone. In the air, the Agreement defines no-fly zones around the military demarcation line between the two Koreas.

The second type of measures concerned communication and procedures to prevent sudden escalation of military tensions. These include the establishment of an “Inter-Korean Joint Military Committee,” permanent means of communications, and rules of engagement to prevent accidental clashes.

The third type consisted of encouraging the armed forces to participate in cooperative rather than adversarial activities. The Koreas agreed “to cease various military exercises aimed at each other.” Instead, the armed forces were to cooperate on the joint excavation of remains in the DMZ and on the facilitation of inter-Korean transport and exchanges.

The Korean Peninsula is one of the most highly militarized pieces of real estate on Earth with millions in arms, including many thousands of tanks, artillery pieces, and numerous types of conventional missiles on all sides. In order to substantively reduce military tensions and to build permanent peace in Korea, it will be necessary to reduce the forces of all parties on the Korean Peninsula, including those of the United States. Encouragingly, the two Koreas already agreed in the Panmunjom Declaration “to carry out disarmament in a phased manner, as military tension is alleviated and as substantial progress is made in military confidence-building.”

North Korea has repeatedly signaled openness to the notion of force reductions. As far back as 1972, North Korean leader Kim Il-sung declared that “the armies of the north and south ought to be reduced considerably…to ease the tension between the two sides and to lessen the military burdens.“ In 1980, he proposed in the context of reunification to reduce the military strength of the two sides to “100,000-150,000 men each.” He again detailed force reductions proposals in 1987.