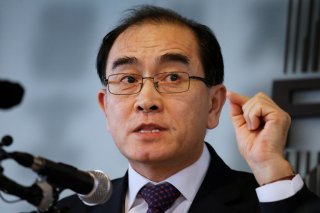 On April 15, the constituents of Seoul’s most affluent district in Gangnam elected a North Korean defector as their parliamentary representative in a general election held at the height of the global COVID-19 pandemic. This attested to the Korean people’s unswerving commitment to democracy but underscored the persistent weight of Cold War ideology on the country’s politics which deters inclusion and diversity. A highly visible figure in the campaign for North Korean regime change (regime collapse), Thae Yong-ho served as Pyongyang’s deputy ambassador to the United Kingdom before he defected in 2016 and ran on the ticket of the opposition United Future Party (UFP). The UFP represents the most critical view of the current South Korean President Moon Jae In’s reconciliation policy, charging the government for being soft on “communism (which means the Kim family rule).” The people’s response to Thae Yong-ho’s election has ranged from amusing, unexpected, puzzling, to outright shocking. But none of these responses are warranted given the fact that his constituents in the upscale Gangnam district cast the exact ideological vote they would have cast, and have always casted, in any case, based on an anti-communism. Sadly, therefore, the election of the North Korean defector has nothing to do with the question of inclusiveness towards South Korea’s new political minority from North Korea.

There is a danger that the election of Thae Yong-ho might validate the illusory notion of a model North Korean defector in South Korea and around the world—one who detests the Kim family rule, supports the collapse of the regime in Pyongyang, repudiates the merits of socialism, or any favorable ties to the past he or she left behind. Thae Yong-ho may be the most politically visible North Korean defector but in no way represents the truly wide variety of more than 30,000 North Korean settlers in South Korea (72% of whom are women) whose life experiences, values, and ideals differ dramatically. There are costly political and social consequences to the highly ideological approach to North Korean defectors in South Korea whose interests and identities cannot be fully represented by the likes of Thae Yong-ho whose life both before and after the defection is linked to status, power, politics, and money.

The reality and nature of identity transformation among North Korean defectors is not that simple. In their identity transformation, multiple factors such as pre- and post-defection economic, education, marital, social status, not to mention gender and generational differences will affect their thinking and attitude towards their old and new homeland. Some might be negative toward their past and positive about South Korea; some might be positive about both and some might be negative about both. Some might choose to voice their political opinion, the most prominent of them being Thae Yong Ho, but others might choose to (or be forced to) silence themselves, and still others might just be indifferent.

Their new identity as South Koreans, therefore, must not be confined exclusively to anti-communism and anti-North Korean sentiment. This used to work when opposing communism itself used to be sufficient as South Korea’s unification policy and anti-communism was the near-exclusive standard by which to determine one’s national qualification during the Cold War era. However, as South Korea’s democracy has matured owing to the people’s courageous struggle, the Cold War binary is progressively becoming an isolated position. Nothing makes this clearer than the unprecedented landslide victory (180 out of 300 seats) of the ruling Democratic Party (DP). South Korea is evolving into an ever-more pluralistic and diverse society in which political opinions are widely varying depending on socioeconomic and cultural factors, in addition to the generational and gender gap. People’s views about the merits and demerits of democracy and capitalism will vary, and they are demanding that these diverse views be incorporated into policy deliberation and implementation.

In this context, North Korea defectors should also be allowed to freely express their views, including lingering appreciation of “socialism”—which in the case of North Koreans is usually indistinguishable from the national—and criticism of capitalist society. It is unrealistic to expect them to conform to the standard model of a North Korean defector constructed to humiliate the North Korean regime no matter how unpalatable it is ideologically, politically, or diplomatically.

This is because North Korean defectors may have left their origin of birth, but this does not mean that they have altogether rejected the values, morals, and lifestyles they have become accustomed to. And they still leave behind family members, friends, and colleagues whose lives are dependent on the stability of the regime and whose relatives reside in parts of the capitalist world where there are pro-North Korean communities (for example, Japan or the United States). There is no way of assuming that all ordinary North Korean people will benefit from the collapse of the Kim family regime. This is not because the regime is justifiable or tolerable (which it isn’t). The dictatorship may be imposed on an unwilling population. However, the customs, sentiments, values, and lifestyles they have become used to within the system of North Korean socialism cannot be suddenly eliminated upon their entry to South Korea. And the elimination of their past identity in socialism—which is truly diverse depending on their pre-defection socioeconomic status—cannot be the indicator of their qualification to become a good South Korean citizen. Essentially, North Korean defectors came to South Korea in search for a better life as a human being—they deserve a better life as a basic human right, not because they qualify as South Koreans strictly on being anti-communist. Their search for a better life should not be linked to any political position or policy of the government. Let North Korean defectors express themselves in their multitudes of emotions and sentiments about their past and present. This will be the true test of South Korea’s vibrant yet limited democracy.

Jean Do (Ph. D., University of North Korean Studies) is an assistant professor at the Department of Humanities for Unification at Konkuk University in Seoul. The opinions expressed in this commentary are solely hers.