Why Trump and Kim Are Stuck in a Waiting Game 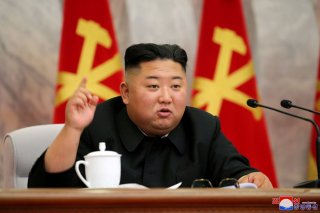 With the U.S. being the most hard-hit country by the coronavirus, and North Korea’s claims about zero infections difficult to believe, time might be up for Trump’s “special personal relation” with Kim Jong-un to bear any tangible fruits ahead of the presidential elections. At present, prospects of jumpstarting the negotiation process look gloomy even though none of them has formally abandoned the nuclear talks.

While Kim’s “Christmas gift” never actually came after his self-proclaimed end-of-year deadline elapsed, the North current stance shows little inclination for a return at the negotiating table unless Washington “rolls back its hostile policy.” Throughout his diplomatic overtures towards South Korea and the United States, Kim has delivered a clear message of what he aims for in the short-term, which is significant sanctions relief from the international community but without this leading to him give up his WMD programs. For its part, the incumbent U.S. administration is in no way willing to alter the bottom line of its North Korea policy, as Secretary Pompeo recently reaffirmed.

Due to the persistent lack of flexibility in each other’s actions, Washington and Pyongyang are kept far away from taking any meaningful steps towards normalizing their relationship. And with the pandemic further complicating their calculations, particularly in terms of domestic spending imperatives, preserving the status quo for the rest of the year may look as the most viable option for the two leaderships. Based on decades of negotiations with the United States, North Korea might be tempted to wait and see who will be sitting in the Oval Office next January instead of investing time being aware that any potential interim agreement, regardless of how much limited in scope, could be scrapped once a different administration settles in.

Without doubt, Trump’s unconventional North Korea policy should get credit for keeping direct high-level contacts alive. On the other hand, his strategy has stripped the working-level talks of their meaning as the vital settings where the parties work towards a process that could be sustainable and consistent in the long-run. In fact, the U.S. President’s downplaying of Pyongyang’s human rights abuses and continuous missile tests has deprived his top negotiators of leverage when criticizing the North Koreans over the exact same issues. Given Joe Biden’s purported harder line approach towards North Korea, the re-election of Trump looks like a preferable outcome for Pyongyang even though Washington’s unilateral withdrawal from the JPCOA and later killing of top Iranian general Soleimani have likely prompted the North Korean regime to reassess both the U.S. ability to use force and Trump’s reliability as a negotiating partner.

Should Biden prevail, it could mean going back to square one. By perceiving the former Vice President as a more hostile adversary, Pyongyang might resume a more confrontational stance to show the new administration its willingness to be treated with the status of a “full-fledged nuclear state”—which Trump’s made-for-TV events have de facto granted to Kim—instead of a resumption of the strategic patience.

If the combination of the global pandemic and U.S. electoral appointment does not bode well for any major diplomatic breakthrough for the rest of the year, there is high likelihood of more attention-getting moves from Pyongyang but not to the point of forcing Trump’s hand with an ICBM or nuclear test as they would cross international redlines. Amid stalled negotiations, the pace of North Korea’s nuclear and missile programs has not slowed down and the regime continues to heavily invest in strategic weapons, including cyber ones, to compensate for the obsolescence of Pyongyang’s conventional military arsenal. The latest satellite images and the missile tests of March and April—thus far more than in 2017 when the Peninsula seemed at the brink of war—hint the intent to further expand the North Korean ballistic missile capabilities with improved accuracy and are a stark reminder to the U.S. and its regional allies of the seriousness of Pyongyang’s anything but dormant threat.

As things stand, it is hard to determine in whose court the ball lies, but what the current standoff in the U.S.-North Korea nuclear talks has made very obvious is that as long as the two sides do not scale back from unrealistic expectations towards mutually acceptable terms, diplomatic progress cannot be within reach.

Francesca Frassineti is Associate Research Fellow at the Asia Centre at the Italian Institute for International Political Studies (ISPI). She has recently completed her PhD in Global and International Studies at the University of Bologna. Her thesis focused on the international and domestic constraints on South Korea’s foreign policy amid the country’s middle power activism.