Why a Trump-Kim Jong-un Summit Won't Happen Before the U.S. Presidential Elections 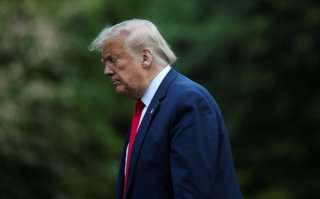 Time is running out for Donald Trump. The November presidential election is looming, and the coronavirus outbreak is getting out of hand, which as a result the U.S. economy is faltering with almost one in four Americans being unemployed. If President Trump is even thinking of scoring a few points on his foreign policy report card before November, he should not bank on a summit with Kim Jong-un in the next five months.

But why? North Korea will not agree to either a summit or working-level talks with the United States under the current Trump administration.

Pyongyang probably expected that the Trump administration might be able to bring to table a “new calculation” when it first agreed to a U.S.-North Korea summit in early 2018 under South Korea’s facilitation. Yet, three summits and multiple exchanges of letters between Trump and Kim later, no visible progress has been made in denuclearization while North Korea, oblivious to international response, has continued to launch missiles. The reason for this stagnant progress is obvious: the deal offered by the Trump administration was no different from that offered by previous administrations. Pyongyang seemed to have concluded in October last year that any inter-state dealings with the United States is over until either a new administration comes in or the Trump administration offers a significantly different calculation that entails easing of sanctions before North Korea dismantles its nuclear and missiles programs.

Because North Korea probably decided that it will no longer engage or interact with the United States at the official level, the probability of coronavirus pandemic cooperation is extremely low even as Trump showed willingness to help North Korea through his letters to Kim. This is apparent from official North Korean statements since last October that have repeatedly framed letter exchanges as being limited to personal relations between the leaders, and not as representing official or state-level engagement.

This drawing of a clear line between North Korea’s relations with the United States and Kim Jong-un’s interpersonal relations with Trump also has important implications for future talks. If the Trump administration is ever considering resuming talks with North Korea before the elections, it will have to recognize that any official talks should be prepared from scratch. In other words, it means having to prepare talking points by going back to the square one situation of late 2017 and early 2018. Any references made on the previous bilateral summits between Trump and Kim as well as all other levels of official meetings during the 2018–2019 period, therefore, will be blatantly disregarded by North Korea.

This could only mean that five months is too short to prepare for a fourth summit, and more so if it is going to be held remotely. Not only does the Trump administration have to come up with a new calculation to bring about a breakthrough in both bilateral relations and denuclearization talks, but it also has to make sure that underlying working-level talks go hand-in-hand with the more glamorous “Zoom” photo-ops between the two leaders so as to avoid bungling another summit that would be “historic”—historic only because it would be virtual.

Minseon Ku is a PhD student in International Relations and Political Psychology at Ohio State University.