Will China Prod North Korea Back to the Nuclear Negotiating Table? 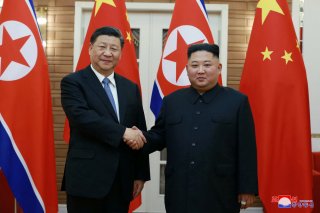 The sixtieth anniversary of a “friendship pact” between China and North Korea has recently passed, and China’s Xi Jinping and North Korea’s Kim Jong-un have indicated a desire to take relations to a new stage. But does this include working towards finding a negotiated solution to bring about North Korea’s ‘denuclearisation’? Or is it more likely that China finds it convenient that the United States is confronted by Pyongyang equipped with nuclear weapons?

The language used by North Korea on China-North Korea ties emphasized “smashing the high-handedness and desperate maneuvers of hostile forces.” China’s Xi claimed he sought “friendly cooperation between [China and North Korea] to . . . excel to new levels.” Whether that implies Beijing expects North Korea to coordinate any diplomacy with the United States in a manner that benefits China geopolitically is key.

In reality, there seems little prospect of a comprehensive solution between the United States and North Korea, with the latter continuing to build up its stockpile of ballistic missiles, with some capable of delivering nuclear weapons against the United States. North Korea certainly has no intention of agreeing to “comprehensive, verifiable and irreversible denuclearization.” President Joe Biden would know that diplomacy isn’t going to lead to a grand bargain. Yet diplomacy must continue in some form.

It is more likely that Biden will seek a calibrated and practical approach to diplomacy with the DPRK that focuses on boosting stability and reducing the risk of miscalculation, rather than the type of meaningless summitry that former President Donald Trump indulged in with Kim. China’s role in this process might potentially be as a facilitator, but the risks of bringing China to the table are high.

China will seek to exploit the dispute to its favor. Although Beijing doesn’t want an aggressive North Korea making nuclear threats against its neighbors, it must see the objective of any negotiation between Washington and Pyongyang as reducing U.S. presence and influence on the Korean Peninsula. What might facilitate that outcome is open to speculation.

For example, one possible quid pro quo arrangement might see China push Kim to eliminate older liquid-fueled missile capabilities such as the Hwasong 14, Hwasong 15, and the more recent Hwasong 16 that could threaten the United States, but in return, the United States would have to reduce the nuclear threat to Pyongyang and also withdraw THAAD missile defense systems from the Korean Peninsula. That would be a big concession for the United States to make in return for North Korea to retire older missiles, even as it develops new solid-fueled missile technologies.

The United States would have to consider the interests of Japan and South Korea in any altering of the regional correlation of nuclear-capable forces, especially in terms of air-delivered weapons such as the B61-12 gravity bomb that could be delivered by tactical combat aircraft. Any withdrawal of such nuclear-capable forces would undermine the confidence of Tokyo and Seoul in U.S. extended nuclear deterrence, even if the United States could still strike North Korea with strategic nuclear forces in a crisis.

Finally, North Korea’s missile development isn’t standing still, and solid-fueled ICBMs and submarine-launched ballistic missiles are proceeding. Even if the United States were to withdraw nuclear forces from the region, the development of North Korean nuclear weapons wouldn’t stop. Biden must be cautious of a bad bargain in any negotiation, particularly where China seeks to exploit a short-term win for the United States to create a long-term advantage for China.

Conversely, not engaging in delicate diplomacy risks the likelihood that North Korea will move quickly to a confrontational posture, which could see a resumption of long-range missile testing, and even more nuclear tests.

Beijing is in a strong position to manipulate North Korea in a manner that facilitates Chinese advantage in the region over the United States. But only if the United States under Biden walks into that trap. A more sensible approach would be for the United States to double down on extended nuclear deterrence, and work towards enhancing regional cooperation on effective missile defense to checkmate Pyongyang’s nuclear threat.

Malcolm Davis is a senior analyst in defense strategy and capability at the Australian Strategic Policy Institute.