Will Cold War Allies Russia and North Korea Be Reunited? 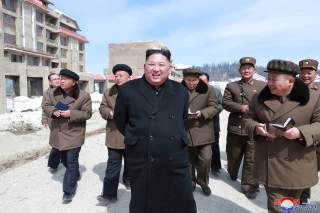 It seems almost inevitable that North Korean leader Kim Jong-un will meet with Russian president Vladimir Putin at some point in the near future, possibly in the port city of Vladivostok in Russia’s Far East.

The United States should be concerned.

Since this would be the first meeting between the two leaders since Kim came to power in 2011, the summit provides an important opportunity for both Russia and North Korea to advance their interests.

Many of those interests don’t align with ours.

Putin and Kim will also find a stinging sense of solidarity in their international economic isolation, as both face punitive U.N. and other U.S.-led international trade and financial sanctions due to the controversial policy choices they’ve made.

The results of a Putin-Kim summit could be problematic.

A Putin-Kim tete-a-tete could well provide an unwelcome opening for Russia to insert itself into the already-vexing state of U.S.-North Korea relations, especially the ongoing nuclear negotiations.

Moreover, a summit also allows Moscow to signal Washington that—because it may have some, at least perceived, influence over North Korea’s policy toward the United States—Russia’s interests in places like Ukraine, Syria and Venezuela must be respected.

Plus, concluding a successful Putin-Kim summit would also give Russia new potential political leverage over the other Northeast Asian powers of South Korea, Japan and China.

If Seoul perceives Moscow has pull in Pyongyang, it would give Russia clout in South Korea. Moscow could look to create cracks in the U.S.-South Korea alliance while seeking Seoul’s assistance in developing Russia’s underdeveloped Far East.

Tokyo and Moscow have recently been negotiating over the unresolved Northern Territories/Kuril Islands issue. If Japan believes Russia has power in North Korea that might affect Japanese security or humanitarian issues, it could improve Russia’s position in those talks.

China and Russia have a host of aligned interests, but they’re not natural allies, especially in Asia. Based on history, geography and national interests, there is a high-level of strategic distrust, despite collegial rhetoric to the contrary.

Pulling Pyongyang a bit out of Beijing’s sphere of influence will improve Moscow’s hand in dealing with China’s overwhelming dominance in the Far East which, though far from the Russian capital, is still of great importance.

Not to mention that a little bit of Sino-Russian rivalry over North Korea could directly benefit Pyongyang. Positive talks with Moscow would expand Pyongyang’s portfolio of powerful partners beyond Beijing. It could use Sino-Russia competition to maximize its political, economic and military support from both nations.

Playing its two big neighbors off each other worked during the Cold War, why not now?

It should also be noted that any additional support Pyongyang receives from Beijing and/or Moscow as a result of its new relationship with Russia will improve North Korea’s position vis a vis the United States, too.

North Korea shares an eleven-mile border with Russia and will seek continued Russian help evading punitive economic sanctions at the summit, including the illegal shipment of fuel oil at sea as well as the export of chemicals to Syria.

Furthermore, Moscow still hasn’t sent home all of the North Korean workers toiling in Russia—something required by U.N. Security Council Resolution 2397. Pyongyang, which benefits economically from their labor abroad, could ask Moscow to slow-roll their return.

In addition, while overt sales of weapons are unlikely due to sanctions, North Korea may seek help from Russia on important science and technology and industrial programs where the possibility of detecting collaboration is reduced.

Since Pyongyang has long embraced a policy of demanding some form of “compensation” for high-visibility meetings such as this—and Moscow may be in the mood to be generous—Washington should prepare for a plethora of potential problems from a Putin-Kim summit.

Though ties between the former Cold War allies of Pyongyang and Moscow aren’t what they once were, both sides will be looking for a new start—one that gives them an advantage in addressing their individual and common challenges.

And dealing with Washington will be at the top of both their lists.