Will the Coronavirus Force Kim Jong-Un to Accept Humanitarian Aid? 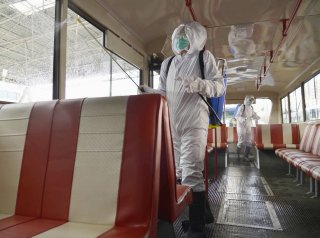 North Korea has taken unprecedented action to prevent the spread of the deadly coronavirus, also known as COVID-19, through its borders. Shutting off numerous vital sources of income, the government halted tourism, closed its border with China, and banned internal travel between provinces.

Although it is likely that North Korea continues a degree of restricted trade with China, the effects of this lockdown can only be devastating to the nation’s already beleaguered economy.

Reports also confirm that secondary schools, preschools, and childcare centers will be closed for a month, and university students in the country’s capital, Pyongyang, will be quarantined in their dormitories.

These drastic steps far exceed measures taken to combat the 2003 SARS virus which also originated in China. North Korea continued to allow limited travel into the country from Russia and only quarantined travelers flying directly from nations affected by SARS.

The regime partially closed its border with China, slowing down trade. However, North Korea was much less reliant on Chinese trade in 2003 than it is today.

The 2014 Ebola outbreak in Africa likewise garnered a slow response from the regime. Two months after the World Health Organization had announced a global health alert, Pyongyang began placing foreign travelers under quarantine for twenty-one days and banned all foreigners from entering the country.

Many officials in North Korea viewed this response as an overreaction to the Ebola outbreak, which was mostly contained in West Africa. A committee was formed to debate whether the threat warranted the negative economic effects, and the border was reopened after four months.

Despite many considering the Ebola response as an overreaction, North Korea’s leadership has taken even stronger action against the new coronavirus. North Korea was relatively early in closing its border with China when the virus gained international attention in January.

However, even the Hermit Kingdom’s isolation appears unlikely to protect it. The H1N1 swine flu has previously crossed the Chinese-North Korean border via animal transmission. North Korea’s Chinese border is, in fact, only ostensibly closed; smuggling continues and is often facilitated by North Korea’s military.

While the regime continues to claim that the coronavirus has not spread within its borders, unofficial reports claim that thousands have been quarantined and 180 soldiers have died.

If the disease develops into an uncontrollable outbreak, then the North Korean regime will likely face one of the most serious challenges to its rule and legitimacy. Sanctions, economic slowdown, and a feeble healthcare system in the face of a global pandemic will likely spur internal changes.

Under these dire conditions, it is likely that North Korea will have to accept humanitarian aid from the global community.