Will Diplomatic Progress with North Korea Devolve Into Regional Chaos? 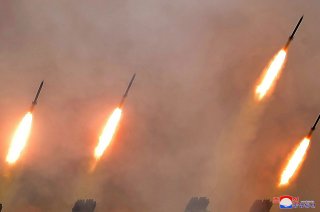 The Washington-Pyongyang relationship represents the perfect example of a confrontation between an asymmetric strategy by the United States and the asymmetrical capabilities of North Korea. If the current coronavirus pandemic has enabled South Korea to rebalance its relationship with the United States, then it will also undoubtedly have the effect of strengthening North Korea's political and economic dependence on China. For Pyongyang more than for Beijing, the danger surely resides above all in circles close to power. In the face of the health crisis, Kim Jong-un needs the support of senior officials of the state apparatus more than ever—senior officials of the Workers' Party of Korea, his military high command and senior security officials—but also of the entrepreneurial class as well.

In their management of this health emergency, China and North Korea have the same coercive mechanisms at their disposal: the use of an omnipresent security apparatus and effective propaganda aimed at ensuring sufficient social control of their population.

From a diplomatic point of view, North Korea is in a worse position than it was in early 2019; South Korea and the United States are in the same position they have been in since President Donald  Trump took office, and South Korea and Japan are seeking to rebuild their relations after a tumultuous 2019. Both change and continuity are therefore part of the geopolitics of the Korean Peninsula.

North Korea's nuclear status is now enshrined in the North Korean constitution, which makes denuclearization under U.S. pressure even less likely in the near term. In other words, the DPRK has nothing to lose: it is very likely that in exchange for denuclearization, acceptable demands will be made—the establishment of formal diplomatic relations, economic aid, withdrawal of sanctions, etc., but perhaps other much more radical demands, including a possible withdrawal of American troops from South Korea.

The United States, which is more concerned over an expansionist China than a nuclearized North Korea, does not have confidence in any security guarantees that Pyongyang may claim. Thus, it is very likely that the results of future exchanges will be negligible. It thus seems that a trilateral alliance between the United States, South Korea and Japan to counter China may be in the offing. Beijing is also concerned about the snowball effect: the presence of the missile defense shield in Seoul which could prompt Japan, Taiwan and the Philippines to follow a similar path. Whether the crisis subsides or intensifies, Washington's interests in the region remain too important: thus, for Beijing, the most important threat is not Kim's regime but Trump's United States, which, according to Chinese analysts, is using the North Korean crisis to take control of the region.

The tone of the U.S. president and his injunctions against China do not help. Unless more convincing arguments are made, it is therefore unlikely that Beijing will let go of its North Korean asset and take the risk of causing regional chaos. It is important for the United States to maintain a communication channel with North Korea to avoid unintended conflicts. Washington should patiently continue to urge North Korea to come back to the negotiation table, and U.S. allies and partners should support such efforts. Would a multilateral security structure resolve all the issues? No, but neither will strictly bilateral security arrangements. A regional framework can only succeed if each party is willing to invest political will, resources and, to a minimal extent, surrender some form of sovereignty in favor of regional security. It is imperative, therefore, that reinforcing structures be established to build trust and a process of interaction in the security field.

Trump has found himself immersed in the same quagmire that his predecessors experienced—one where both sides became almost intractable in their demands. While the initial warm-up between Washington and Pyongyang is not dead, the dynamics of the talks on the denuclearization of North Korea are, at best, stalemated. Talks will likely only resume at a much slower pace and likely not before the end of Trump’s current term.

Once again, the North Korean strategic calculation, which has consisted, since the 1960s, of alternating between belligerence and periods of calm appears to be paying off.

Patricia Schouker is an energy and security analyst based in Washington D.C. She is a Non-Resident Fellow at the Payne Institute Colorado School of Mines and an Associate Member of New College, Oxford University. Twitter: @Patricia_Energy