Will Donald Trump and Kim Jong-Un Make a Breakthrough in 2020? 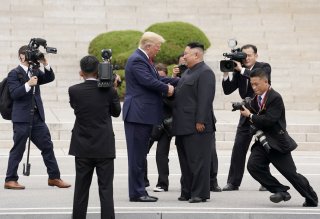 Where are Donald Trump and Kim Jong-un heading in 2020?

Although they met again at the Panmunjom in June last year, they failed in producing any meaningful agreement since then. North Korea still remains convinced that they will agree to denuclearize only when Washington gives up its hostile policy toward Pyongyang and establishes a peace regime on the Korean Peninsula. However, the United States also insists on the North’s giving up nuclear weapons program first in the form of complete, verifiable, and irreversible denuclearization (CVID) or final fully verifiable denuclearization (FFVD). So, they are not ready to negotiate with each other yet in 2020 and are less likely to make a breakthrough. In this deadlock, the coronavirus made the situation even more difficult. Some predicted that Trump may seek for a new North Korea policy in his reelection campaign. The spread of the coronavirus, however, made it difficult for both Trump and Kim to deal with the denuclearization issue.

Then, will Kim Jong-un provoke again? Although Kim returned from his three-week disappearance, North Korea does not seem to return from the shock of the coronavirus yet. Under the pandemic crisis, it would be really difficult for Pyongyang to make a serious provocation. After the coronavirus has caused severe damage to the North Korean society, Pyongyang has closed its borders and is not confident in its internal security, so it cannot open the door to the outside world, yet. Even before the coronavirus started spreading, North Korea has had a hard time because of the international sanctions. The problem is that it is suffering from a self-imposed sanction in the shape of the coronavirus. The Politburo of the North Korean Workers’ Party recently discussed issues of internal stability probably related to the coronavirus. The spread of the virus even made Kim Jong-un disappear.

Of course, Pyongyang has fired several short-range missiles during the global pandemic crisis. However, it has witnessed that those missiles were not enough to win the attention of the international community. It may test-fire several more of them or unveil a new type of submarine and SLBM, but it is less likely to make the same provocation with the seventh nuclear test or a new ICBM launch as it did in 2017. Large-scale provocations are less effective under the pandemic crisis, and Pyongyang is not in a situation to manage a new crisis in the midst of the coronavirus. In fact, the pandemic crisis will give a good opportunity to evaluate the Kim regime’s crisis management capabilities and national governance system. If the vulnerabilities of the regime are exposed due to the spread of the virus, Pyongyang may reach out to the international community for help.

Then, will Trump seek to engage Kim Jong-un again in 2020? Trump is not in a position to deal with the North Korean nuclear issue either, given the coronavirus situation in the United States and the prospect of his reelection campaign. The debate will continue between the United States and China over the epicenter of the coronavirus, and it will further amplify the U.S.-China conflict in the future, which can pose great difficulties in resolving the North Korean problem. Under such circumstances, there would be much U.S.-China cooperation in the denuclearization negotiations.

The South Korean government may want to start with a small inter-Korean cooperation project such as health cooperation, but it is unclear whether North Korea will respond in a positive way. North Korea is not interested in small-scale projects with South Korea. However, the South Korean government has much difficulty in starting a large-scale project given the international sanctions on North Korea unless there is any substantial progress on the denuclearization procedure. Of course, Seoul should continuously make efforts to improve inter-Korean relations by persuading Pyongyang. However, it is necessary more fundamentally to establish a basis for inter-Korean cooperation by resuming negotiations on the issues of denuclearization and peace regime on the Korean Peninsula. Although both Washington and Pyongyang are not ready for dialogue yet, Seoul still needs to give diplomacy another chance.

Jihwan Hwang is a professor at the University of Seoul's Department of International Relations in the Republic of Korea.