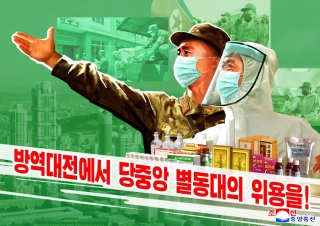 North Korea, which until recently claimed to have zero cases of COVID-19, is suffering one of the worst outbreaks anywhere in the world since the pandemic began. Per a Yonhap News Agency report on Tuesday, the number of cases is now approaching three million, less than two weeks after the first reported case on May 12.

The regime in North Korea has reported a death toll of sixty-eight since the pandemic of “fevers” began.

“In a few days after the maximum emergency epidemic prevention system was activated, the nation-wide morbidity and mortality rates have drastically decreased and the number of recovered persons increased, resulting in effectively curbing and controlling the spread of the pandemic disease and maintaining the clearly stable situation,” the state-run news agency KCNA reported this week, per Yonhap.

Meanwhile, Daily NK reported Monday that the North Korean regime has been conducting mass testing in the capital of Pyongyang, with those refusing testing labeled “disloyal.” But it’s not the kind of testing that those in most countries are used to, which also raises questions about the country’s overall case count.

“The authorities are mainly relying on taking people’s temperatures for coronavirus testing,” a source in Pyongyang told Daily NK. “If someone has a fever for more than two days along with coughing and difficulty breathing, they are designated to be quarantined.” The source did say that saliva-based testing is happening in other parts of North Korea.

Will North Korea get any aid from South Korea’s new government? Reuters reported Tuesday that South Korea will call for “vaccines and other medical help” for North Korea at the World Economic Forum in Davos.

“Sending vaccines is a priority as the vaccination rate is believed to be near zero in the North," Na Kyung-won, a special envoy of the new South Korean president, told Reuters.

During President Biden’s visit to the region this week, he and South Korean president Yoon Suk-yeol said they were willing to help North Korea during its COVID wave. However, North Korea has not yet responded to offers of help, per the Reuters report.

“Making a regular call at 9 a.m. via the inter-Korean liaison office today, the Ministry of Unification asked the North for its intent on whether to accept the message that we sought to deliver last week, but the North Korean side made no mention of the issue and ended the call," the ministry's spokesperson, Cho Joong-hoon, told the press Monday, per Yonhap.

Could the outbreak cause trouble for the future of the Kim regime in North Korea? A report from NK News argues that that’s unlikely to be the case.